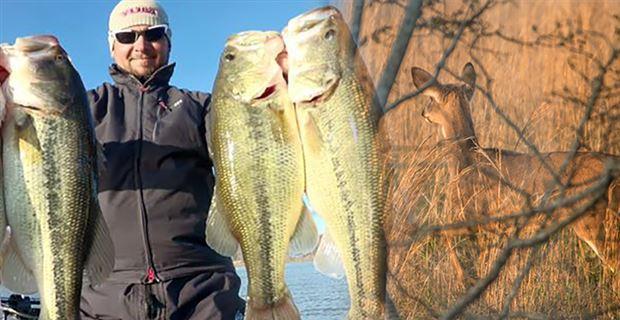 It’s no coincidence many folks who enjoy bass fishing also take pleasure in deer hunting. A love for the outdoors and the wild places of our earth are deeply seeded values within both pastimes. If you take a closer look, you’ll see several parallels between deer hunting and bass fishing which seem to attract many avid anglers to the woods come October.

Bassmaster Elite Series pro Jason Christie is a perfect example of an angler who is also a passionate deer hunter. He believes there are at least 5 correlations between bass fishing and deer hunting that help you in either pursuit.

While a deer hunter and a bass fisherman may not always be looking for the same details when studying a map, understanding how to read a contour map helps both endeavors.

“Being able to look at Google Earth or a contour map and break down what you’re looking at is a big part of both fishing and hunting,” Christie said. “A guy who fishes can look at a contour map and know where the steep breaks are on a body of water, or where it’s more gradual sloping. Those same attributes will help you find areas worth exploring in the woods.”

In both fishing and hunting if you’re able to review a contour map of the property or lake, you’re able to learn a lot about your target area. What you’re doing by looking at these maps is getting a better understanding for the lay of the land, even if it is underwater. You might not be able to find a mother lode of fish or a sure spot in the deer woods by studying a map, but at the very least you’ll know what’s available to you.

“By finding the ridges, draws, and low-lying areas you’ll be able to note potential bedding areas or feeding zones for deer which will help you immensely when it comes time to hang a stand,” Christie said. “For bass fishing in the fall you’re looking for flats, creek channels and intricacies in the back of pockets. In either case knowing how to read and understand what you see on the map will translate into more productive trips to the woods or the water.”

Preparation is also imperative in both deer hunting and bass fishing. While it’s not impossible to step onto a new property and kill a big deer or catch a big bass on an unknown lake, the odds are heavily tipped in your favor if you do some pre-prep for both pursuits.

“While I’ve never been one to go pre-practice a lake before we have an event there, preparation is still important,” Christie said. “I’ll still get prepared for an event by getting my tackle ready, looking at different maps of the lake and getting my mind right for the body of water.

“It’s the same for me with hunting. I won’t allow myself to get too immersed in the hunting mentality until after the Elite Series season is over. But I feel the need to plant food plots, hang stands and set trail cameras leading up to October. Preparation is crucial to success for both deer hunting and bass fishing.”

Pinch points have been desired targets for bass anglers for a long time, especially in the spring and fall of the year when bass are moving most. Your odds of placing a lure in front of a fish’s face increase when they swim through a 40-yard channel versus a half-mile wide creek. Experienced hunters use the same technique when after their game.

“All a pinch point does, for both bass fishing and deer hunting, is increase your chances of coming into contact with your quarry,” Christie said. “Both bass and deer are moving a lot in the fall. In relation to fishing, something like a bridge channel or a bottleneck in a creek is a perfect place to find bass.

“The same is true when targeting deer. Let’s say you know a buck has been coming to a certain hayfield every night. The hayfield may be 500 acres and you can’t know exactly where he’ll come out in the field. But if you hunt some kind of pinch point leading to the hayfield, chances are you’ll get an opportunity to see and be within range of that deer. “

Targeting these funnel areas will result in catching more bass and seeing more deer for you this fall. 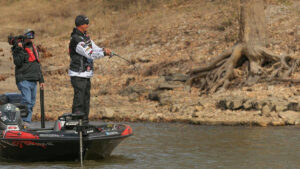 Find the spot within the spot

Spots within spotsâ€”or sweet spotsâ€”are a big deal in bass fishing. We often see high-level tournaments won by anglers who figure out one little sweet spot within a massive grass flat, or finding one special shell bed amongst a thousand similar shell beds.

?”I’ve found individual stumps in a half-mile stump field that seemed to hold all the fish in the entire creek,” Christie said. “The same has been true for single docks in a whole pocket of piers, or one piece of standing timber in an acre of other trees.”

Paying attention to detail has led Christie to many top finishes over his years as a professional angler. During his recent second-place finish on the Potomac River, he figured out one football-sized area in a mile-long grass flat that held better quality fish.

“I’ve noticed the exact same thing while hunting,” Christie said. “I was hunting an area in Oklahoma last year that had 20 white oak trees on a ridge and one single tree had a lot more activity than the rest. I don’t know if the acorns were sweeter, softer or what, but every time I’d see deer in this area they were going to that one tree. It’s exactly like finding a sweet spot in fishing.”

Christie has also noticed that both dominant bucks and big bass seem to mirror each other in their reclusive behavior.

“Big deer and big bass are very similar in my mind,” Christie said. “They tend to be loners who want to be off by themselves; they want to own an area. A big, gnarly buck is going to stay in one area and doesn’t want to have a bunch of little bucks around him. A big bass is kind of the sameâ€”he’ll own a dock or a stump and won’t allow a lot of little bass to be around him.”

There are certainly exceptions, but generally an angler isn’t going to catch a 10-pound bass in the middle of a school of two-pounders. Likewise, a big buck will be territorial and run off smaller bucks from his area.

Christie attributes this loner mentality to the animals being older and wiser. Whether it’s deer or bass, they become increasingly elusive and more difficult to find and capture as they age. By understanding this mentality of each species, it will help you target areas more likely to hold a trophy.

Whether you’re searching for shad-gorging bass or stalking the woods for whitetail, Christie encourages you to get out and enjoy the outdoors this fall. The kinship of both hunting and fishing is apparent and even if you’ve been doing so unknowingly, you’re improving your skills in one practice while exercising the other.