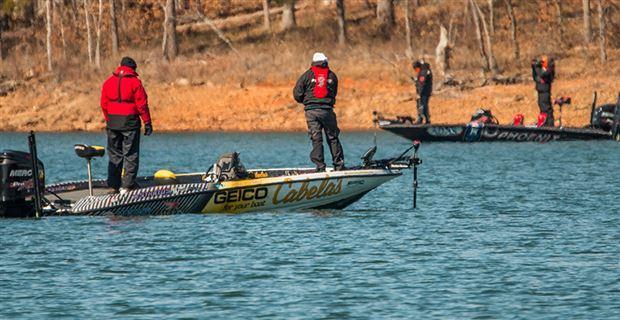 The angling community doesn’t talk about etiquette near enough. For whatever reason, it’s a touchy subject that can really get folks riled up. Instead of complaining about our run-ins and bringing other fishermen down on social media, I think it’s time we look at it dead in the eye and have a quick discussion.

It’s impossible to tip-toe around some of these issues, so I’m not going to. I’ll just call things as I see them. I have made some of these mistakes myself and learned valuable lessons from them. My hope is that we can all simply get on the same page about some things. We’re in this gig together and the better we get along with everyone, the stronger we’ll be as a unit.

I left out all aspects of boat ramp etiquette in this piece because I wrote an entirely separate piece about it. It was too much to put into one article.

No. 1: Cutting anglers off

Tournament organizations have some specific rules in place regarding this issue, but what about the average folks who just want to spend a nice Saturday on the lake? Let’s talk about it.

This rule of thumb is simple: If you find yourself trying to justify it in your mind, you’re probably cutting someone off. Furthermore, if you’d get ticked off if another angler did it to you, you probably shouldn’t do it to someone else.

If you have mapping technology on your boat, try to pay attention to the structure the angler is fishing. If they’re fishing a point, don’t get between them and the shoreline. If they’re fishing a hump or a bar in the middle of the river channel, hug the steeper side of the channel while you pass them. Simply being attentive can make a huge difference in this sport.

Similarly, if you’re in a creek and someone is fishing a row of boat docks (or any kind of cover), don’t start fishing three docks ahead of them on the same side of the creek and think you’re doing them a favor. They’re obviously headed in that direction, so just let ’em have it. Find some different docks.

No. 2: Check with nearby anglers

If there’s a certain spot you’ve been dying to fish and there’s another angler fishing nearby, slowing down to an idle and politely asking permission will get a lot of respect from other fishermen.

“Hey man, you catching ’em today? Would you mind if I fished this stump row for a few minutes? I don’t want to mess you up, so I just wanted to check with you first.”

Act like your momma raised you right. If they say no, thank them anyway, wish them luck and move on. The brush pile isn’t going anywhere. You can hit it another time. It’s just fishing and it’s never worth arguing over.

No. 3: Talk to the dock owners

Bass fishermen love targeting boat docks, which can unfortunately lead to confrontations with some landowners. We’re always quick to point out that they don’t own the water, so we fish ’em anyway. But if they’re actually on the dock enjoying the afternoon with family and friends, just strike up a conversation with them. Ask if they’re okay with you making a few casts.

“Looks like y’all are having a good time! Man, I don’t blame you in this pretty weather. Would it be okay if I made a few casts real quick? I’ll get out of your hair after I catch this 10-pounder from under your dock!”

Whether we want to admit it or not, there’s often a divide between bass anglers and dock owners. We can annoy them and they can annoy us. But if we do our part and handle our interactions correctly, both sides can realize the benefits of one another.

Their docks hold a lot of fish that we enjoy catching. Our sport can bring a lot to their community’s economy. It’s a win-win and a simple smile and short conversation on our part can make an awesome impression.

If there is one gripe I’ve heard more than any other about bass anglers, it’s that we drive our boats too fast.

There’s nothing wrong with lifting the bow and letting ‘er eat when the conditions are safe and you’re following the rules of the waterâ€”it’s one of my favorite things to do. But on a busy weekend when the lake is full of recreational boaters, just kick it down a notch. The bass will be there when you get there.

Very few folks are impressed by how fast your boat can go. It’s not the Bassmaster Classic. You’re not going to set any speed records. And in the large majority of situations, you’re not racing someone to one particular spot.

I might sound like a wuss, but againâ€”we all need to be respectful. Everything we do out there represents each and every person reading this article. This sport is so much more than drinking beer and watching bobbers, so let’s not let our actions sell ourselves short, especially when safety is involved.

I am not and will never be the dude who chases you down at the boat ramp to get 20 bucks in gas money from you. Those guys aren’t too fun at parties. But I do believe in offering to help when you’re in someone else’s boat.

If someone is nice enough to share their boat with you, just pay it forward a little bit. You don’t have to make it rain dollar bills on them and unhook all of their bass throughout the day. Fishermen are a good group of guys, so they’ll probably turn down any help. But the thought is what matters.

You can back their trailer down for them, help ’em wipe down their rig at the ramp, bring a few sandwiches or just be the first one to hop out and pull the drain plug and put the trailer straps on. It’s not all about the money, but showing appreciation is, well â€¦ appreciated.