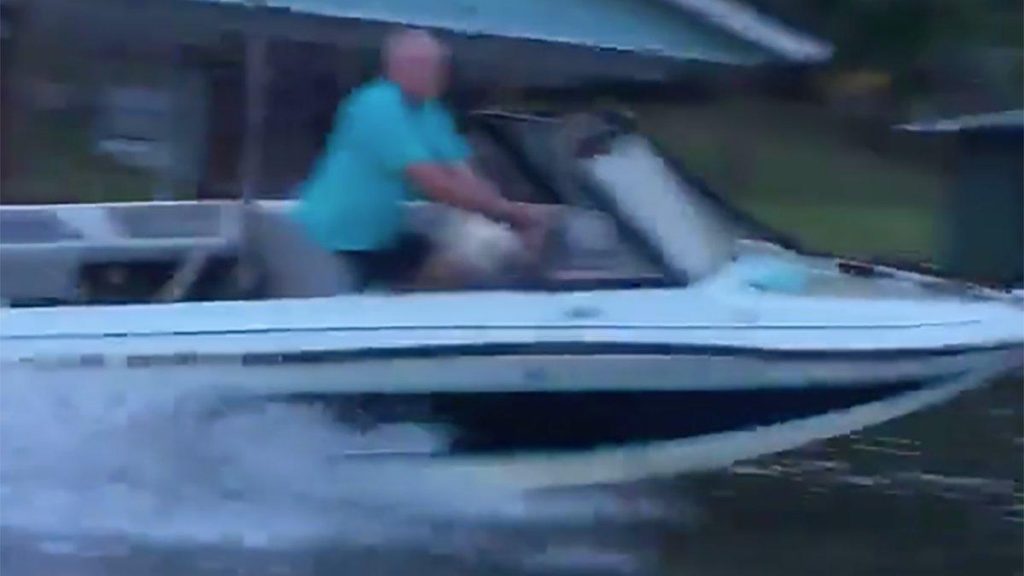 While crappie angler Will Dyess and his buddies were fishing a well-known brush pile on Texas’ Lake Tyler this weekend, lake resident Phillip Morris Lough let the fishermen know they were not welcome around his boat dock.

The anglers were targeting brush tops in front of the man’s dock and catching some fish; just enjoying the evening. But before long, Lough climbed into his ski boat and started running circles around their fishing boat. As you can see in the short video below, the manuevers were quite dangerous and put the anglers’ well being in jeopardy.

According to one of the anglers, Jeremy Judalet, the man even hit his own dock while doing donuts in his boat. Lough allegedly told the fishermen that they weren’t allowed to fish his wife’s crappie hole.

The anglers reportedly left without causing a scene, but they had water coming over their gunnels due to the man’s boat wake. Their bilge bumps were said to be shooting a rooster tail as they worked to pump water from the hull of the boat.

Smith County, Texas Game Wardens have made it clear that this behavior is not tolerated. They’re currently investigating and will be presenting the case to the District Attorney’s office. If charged and found guilty, Lough could face a Class B misdemeanor charge under the Sportsman’s Rights Act.

The man makes a public apology

In a follow-up story posted by EastTexasMatters.com, Phillip Lough has made arrangements to apologize privately to the anglers. He also made a public statement to KETK News.

“I would just like to say how sorry I am for the way I acted Sunday afternoon,” Lough said. “My son was trying to fish out here and they had the dock blocked with boats and ropes and anchor ropes and he came up and told me, ‘I can’t fish because they got it all blocked off.’”

He continued by stating that he “totally lost it” and “I’ve never, not that I can remember, have ever done that before in my life.”

Lough now says that anyone else is welcomed to fish the brush piles in front of his dock.

Below is a short video of the incident. There is some foul language that may not be appropriate for some viewers.