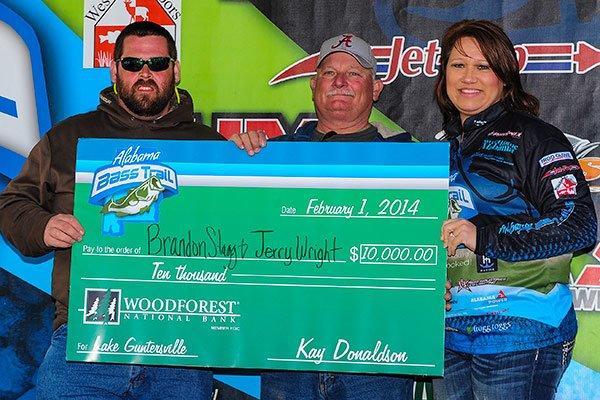 Jerry Wright of Waterloo, Ala. and Brandon Staggs of Summertown, Tenn. won the Alabama Bass Trail’s inaugural event on Lake Guntersville with 5 bass weighing 32.02 pounds. The duo won $10,000 for besting a full field of 200 boats and 400 team anglers on a cold morning in North Alabama.

Wright and Staggs used lipless crankbaits, spinnerbaits and swim baits to catch their fish. After recovering from some trolling motor issues, they were able to catch 3 more big fish to seal the deal.

Here is the full release from the Alabama Bass Trail on the event:

On February 1, 2014, the Alabama Bass Trail held its first tournament on Lake Guntersville with 400 amateur anglers reeling in over 1300 pounds of bass fish. Hosted by the Marshall County Convention and Visitors Bureau, the inaugural tournament brought in anglers from across the southeast and pumped approximately $650,000 into the local economy during the two-day event.

Registration for the first tournament was full at 200 boats and 400 anglers. Jerry Wright of Waterloo, Ala. and Brandon Staggs of Summertown, Tenn. took home the first place prize of $10,000 with five largemouth bass weighing 32.02 pounds. Jamie Smith of Albertville, AL and Michael Rains of Albertville, AL finished second with 29.92 pounds. Michael Stevens, Jr. of Fayetteville, TN and Paul Arnold of Woodville, AL were third with 27.13 pounds. Keith Vann of Cedartown, GA and Lee Pitts of Cedar Bluff, AL placed fourth with a weight of 26.59 pounds and Rahn Hogeland of Trinity, AL and Allen Guyse of Trinity, AL finished fifth with 25.65 pounds.

Rounding out the top 10 were Jimmy Mason and Lance Walker, Scot Giddens and Paul Watson, Steven Wisdom and John Bryant, Mike Raney and Michael Pharr, and Marty Lykos and Michael Carter. According to Alabama Bass Trail Program Director Kay Donaldson, anglers caught 1,324 pounds of bass and during the day-long tournament, and there were no reports of any dead fish. The Alabama Bass Trail Tournament Series is a catch-and-release event, with the fish being returned to the water after weigh-in.

Along with 400 anglers, hundreds of family members and fans descended on Guntersville to witness the inaugural tournament. â€œPreliminary figures indicate an economic impact of $650,000. A full economic study will be conducted and returned to the Marshall County Convention and Visitors Bureau within 30 days,â€ stated Donaldson.

â€œA special thank you goes out to tournament director Fishlife, host Marshall County Convention and Visitors Bureau, and Lake Guntersville State Park for serving as the host accommodation and for their efforts for a successful takeoff and weigh-in,â€ said Donaldson. â€œFans who were not able to watch the tournament either in person or from the live streaming coverage proving by Elite Outdoors Media will still have a chance to see the action. Anglers Channel was onsite filming an episode to be aired at a later broadcast that will be shown in over 40 markets reaching a viewership of over eight million households.â€

The Alabama Bass Trail tournament trail features two divisions: Northern and Southern. Each division is made up of five tournaments on five different lakes. Maximum number of boats is 200 and each tournament will have a $10,000 guaranteed first place prize and will pay 20 places.   The next tournament is set for March 1 on the Mobile-Tensaw Delta.

The top 50 teams in points in each division will qualify for the 2014 ABT Team Championship. Plus, the top 25 student boats overall will be in the final event. To be eligible for the championship, teams must enter all five qualifying events in their respective division.