Some additional details came in over the weekend for the pending world record spotted bass. The IGFA has certified Nick Dulleck’s scale that was used to weigh the pending world record spotted bass. His application, video documentation and equipment are still under review with the IGFA, but they have shared his catch on their instagram page which would insinuate this record could likely be certified.

Also Dulleck has released the world record bass was not caught on a drop shot or wacky rigged plastic like many assumed but rather on a Dirty Jigs Finesse Football jig with a Yamamoto Double Tail trailer. Pictured here are a couple of Dulleck’s favorited pairings for bass fishing from Dirty Jigs and Yamamoto, although he’s reluctant to give up the exact color for which the record spot fell for obvious reasons.

All signs point to Dulleck getting certified as both the California state record holder as well as the new World Record holder for spotted bass.

Nick Dulleck has been bass fishing off and on for more than 20 years, but Valentines Day 2017 might be his most memorable after landing an 11-pound, 4-ounce spotted bass in California this week with his buddy Adam McAndrews on a weekend birthday fishing trip to New Bullards Bar Reservoir. He’s coming off the high of catching the most memorable bass of his life, or any bass angler’s life for that matter, and potentially the new world-record spotted bass. A San Jose stock trader by day and a well-connected rap and hip hop artist by night, his life has a been a whirlwind this week, to say the least.

I talked with Nick, and he’s very humble about the whole experience albeit with a lot of emotion over the catch. He caught, documented and weighed before releasing an 11-pound, 4-ounce spotted bass on the now famed fishery. The fish measured 24 1/2 inch long with a 20 3/4-inch girth. He has been in constant contact with the IGFA and his scale has already been certified by the IGFA.

It was interesting to note the fish was not caught on any of the lures that have caught the previous records and it was not caught on a Kokanee trout imitating lure either but rather a jig and twin tail trailer, a crawfish bottom bouncing bait.

He fished Saturday Feb. 11, 2017 and there were 50-60 boats on the lake. He managed a keeper spotted bass that day, but that was about it. He, however, had a good idea of the adjustments he needed to make. He made a line change that evening in his hotel room and even joked with his buddy Adam that this was going to be the record move. Turns out it might have helped his confidence as he caught the spot of all spots the next morning and then spent the rest of the day documenting the catch to the fullest degree knowing how hard it has been to get a record fish certified correctly out of California. He wanted to be sure he did everything perfectly by the book to not screw up his opportunity and fish of a lifetime.

“I know so many other guys have had trouble getting records certified, so I just wanted to be sure I did everything perfectly by the book,” Dulleck said. “I’ve been fishing my whole life and the whole thing was surreal. We call these big spotted bass ‘guardians.’ We were joking everytime we set the hook on Saturday and Sunday that we had a guardian. Then I hooked that fish and it got real!  It was 60-seconds of adrenaline followed by an hour of disbelief. No more joking around. We got it in the boat and we were both in shock. You spend all that time preparing and planning and fishing, but it still doesn’t seem real when it happens.”

He has posted two videos now on his Guardian Tackle YouTube channel.  And he has the full cast-to-catch-to-certified-weigh-in on video but he’s still reluctant to burn up he and his friend’s fishing spots on an already highly pressured fishery. Thus far IGFA officials are the only ones to see the full video of the catch, landing and weighing of the record-setting spotted bass. There may be a full catch-and-release video released in the near future. So we’ll update if that happens. 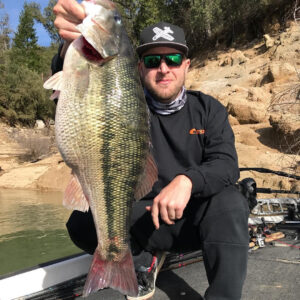 Here’s what he had to say about the catch hours afterwards on his Instagram page:

Here it is! 11lb 4oz Spotted Bass.  After bass fishing for 20+ years I am proud to share this because it proves if you set a goal and dream big you truly can achieve anything. I did it, I was ready, I was prepared. I want to thank my long time friend Adam of @ebisutackle who was with me on his boat and netted her, was my weighmaster, etc.. not to mention all the laughs and good times together on this birthday trip that will make this memory unforgettable for both of us. I also want to thank my friends and family who support my crazy dreams and fishing addiction you know who you are and I appreciate you. I look forward to what the future holds! @guardiantackle #TheGuardian #BigBassDreams #GuardianTackle #EbisuTackle #FebruaryDreamin #SpottedBass #CatchAndRelease #PalmTreesAndDollarSigns

Congrats Nick on one amazing catch! You can follow him @Supranick on Instagram. Also, check out the other reigning world records for bass. 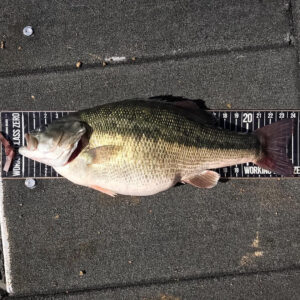