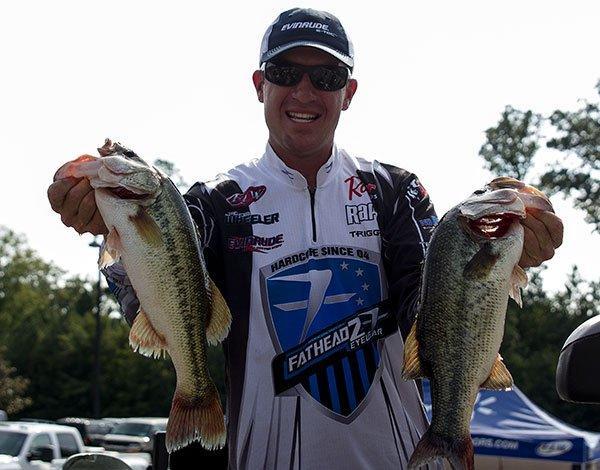 Jacob Wheeler of Indianapolis, Ind., did the unbelievable by not only beating some of the best anglers in bass fishing at the Forrest Wood Cup but by doing at the age of 21 in dominating and record setting fashion to take home the $500,000 prize. He started the week with a record-setting first-day Forrest Wood Cup weight of 21 pounds, 15 ounces, giving him a record margin for the lead. Then he dominated by leading all four days and sealing the deal with a solid limit on the final morning to win by more than 7 pounds and becoming the youngest Forrest Wood Cup champion of all time. He weighed 60 pounds, 1 ounce for the four days.

Wheeler has spent his week up the Chattahoochee River in very shallow water fishing eddies and current breaks and mixing that up with several big bluegill beds down lake. He would target bass around isolated pieces of cover in the form of rocks, stumps, laydowns and more. Today he only had six keeper bites. But the fishing has been a mix of flipping Trigger X plastics, Rapala and Brianâ€™s Beeâ€™s topwaters, Rapala DT Fat and even a Rapala X-Rap Prop.

â€œI got to thank Jay Yelas. Today he approached me and told me to go win that thing up the river. He and I have been sharing water up there, and he didnâ€™t have to do that.

â€œI caught several fish on two different prop baits. Three of my big fish that first day came on a vibrating jig like a Chatterbait. The second day I adjusted from the prop bait that was mimicking a bluegill really well and switched to a more slender Rapala X-Rap Prop to show them a different profile. I caught most of my weight flipping the third day with a Trigger-X Goo Bug. I ran an hour the end of the third day to the other end of the lake to fish two banks and I upgraded by a pound and a quarter and then lost a 5-pounder on the other bank.

â€œThat first day limit was the biggest Iâ€™ve ever weighed in a professional tournament. It was huge for giving me confidence in this event. It was so much like the All-American I won on Cross Lake. It felt very familiar and had a way of sort of keeping me calm because I felt like I had been here before.

Here is what the other competitors had to say about this week:

I have gotten a bite or two that might could have had helped this week but Iâ€™ve fished pretty clean all week but today I had some mishaps. I had some take me in the brush and break me off today, and they havenâ€™t done that to me all week. I was fishing with 6-pound and 8-pound Berkley Fluorocarbon Trilene drop shotting a Jackall Cross Tail Shad, fishing modified buzzbaits with a skirt removed and a soft plastic toad in its place. I would throw a Super Spook Jr when I needed a small topwater bait and a Jackall Bowstick when I was needing a real big bite but mostly sticking deep.

I stopped on a bridge this morning and caught one on my first drop with a drop shot. I gave it my all this week and thatâ€™s all I can do in a championship. 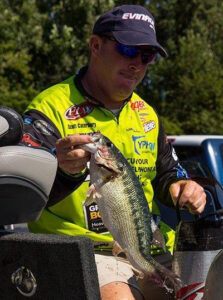 â€œIâ€™ve spent $170 in gas every day this week running from the dam to the river. I think this will put me over the million dollar mark in my career and probably $700,000 of that has come on Damiki baits. Iâ€™ve caught a bunch on their soft plastics and the Damiki D-Pop 70 and a Berryâ€™s Prop Bait this week just running and gunning as much water as I could muster each day. I think if I had fished as much as I ran I might have some more weight. I caught some fish on a shaky head with a Trick Worm and a Damiki Finesse Miki.

â€œMy hat is off to Jacob Wheeler this week. Heâ€™s remained calm and collected all week and thatâ€™s not easy to do. My depth was between 30 and 40 feet on everything. I missed that deep bite two years ago and thatâ€™s what I figured out this year. I wanted to beat Cody Meyer, Brent Ehrler and Luke Clausen at that drop-shotting game on those big spots. I caught a big largemouth today, and I wanted to throw it back because I wanted to beat all those guys on the spots. I went ahead and kept it.â€ 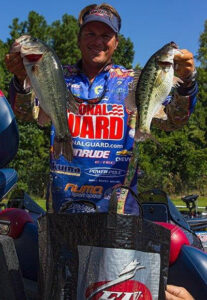 â€œI was fishing a shaky head with a Berkley Havoc Bottom Dweller worm on a medium-heavy action Abu Garcia Verdict rod and a Revo Premier spinning reel. I donâ€™t believe in little light rods for shaky heads. They did a study several years ago and tried to figure out why fish get off and they concluded that a big percentage of fish never get hooked past the barb, so I use heavy sticks and set the hook hard and they usually get in the boat. I lost a lot of big fish yesterday, and I canâ€™t explain it.â€

â€œI had a lot of fun. Lake Lanier was a great venue for the Forrest Wood Cup. Iâ€™ve been fishing up the Chattahoochee River. But I wanted to leave that to Jacob Wheeler, so I ran up the Chestatee, and I havenâ€™t been up there all week. I got stuck a bunch. I had to push and jump out and got my heart beat up pretty good pushing the boat off of sand bars. Iâ€™ve been flipping and pitching up the rivers this week with a Berkley Gripper Jig and Havoc plastics and fishing for some schooling fish down lake.â€

â€œI stuck with what Iâ€™ve been doing all week, drop shotting little worms out there deep for those spots. I couldnâ€™t run to the banks and fish shallow because I havenâ€™t really been doing that this week so I just stuck with what got me here and did what I could.â€

â€œI had really high expectations in practice because I was crushing them. The weather change totally threw me off and I had to totally change my game plan. Today I had to factor in a lot of rough water from boat traffic and a large flotilla of spectators following me today.â€ 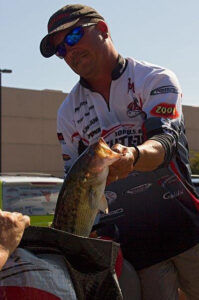 â€œI love to fish docks and I got to do that all week. I donâ€™t fish docks; I assault them. I was just throwing a little shaky head with a little Zoom Baby Brush Hog on it. If you work in aluminum, Iâ€™ve got some choice words for you. I beat a bunch of holes in some aluminum pontoons this week with a shaky head. Seriously this sport is all about family to me. That tenth row is all mine and theyâ€™re mostly kids, so I need the money for them. I got to thank my father and my sons. Theyâ€™ve been such a big help for me this week.â€

â€œI won the Forrest Wood Cup at 24 years old and at that time it was a life-changing experience. Iâ€™d love to win again. I didnâ€™t win some of the battles on my spots today. I only weighed 3 fish for 6-11. I was drop-shotting most of the time this week. I did some other things but mostly the drop shot. Itâ€™s too fun catching those big spots here, one of the best spotted bass fisheries in the world.â€ 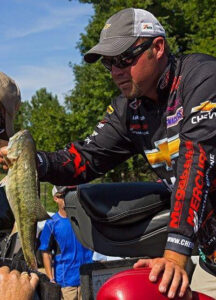