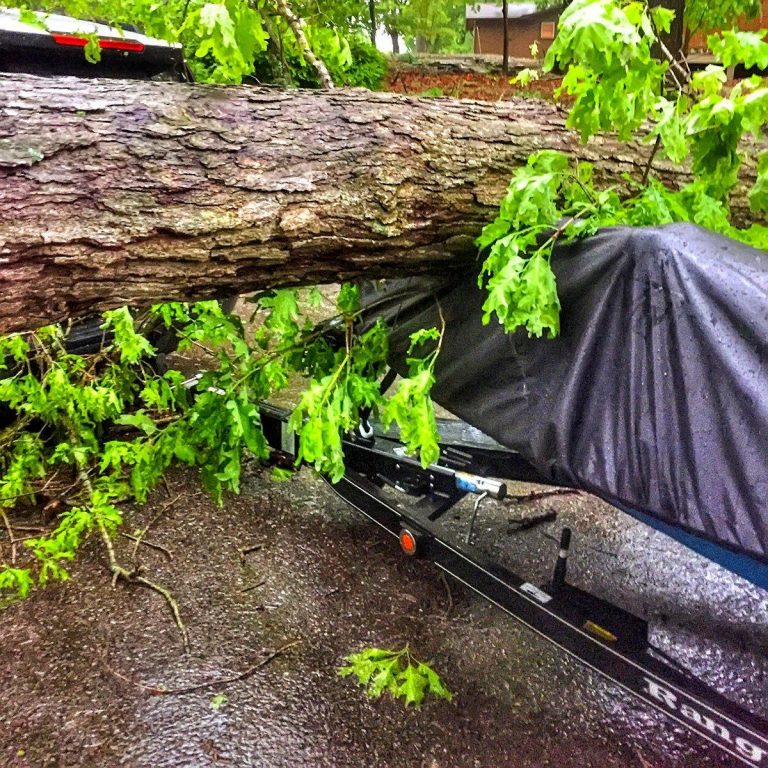 4:15 PM Update: Talked with Dan Morehead a few minutes ago and he had this to say:

“The service crews are just amazing,” Morehead said. “There were guys from crews that I don’t even use their products jumping in and helping get it all broke down and repaired and replaced. It was amazing because it was a torrential downpour. Those guys jumped in without thinking twice about whose stuff it was and got me going. I’m not 100% back to normal but I’m probably 96% because of these guys. And it looks like me and everyone else will be fishing a new lake tomorrow from the looks of these storms today.”

Traveling across the country fishing professional bass tournaments is demanding enough. Then mother nature throws you a curve ball beyond just messing with the fishing. Take the 70-foot tree that fell on FLW Tour pro Dan Morehead’s boat this morning at Beaver Lake as the first round of storms made its way through the hill country of the Ozark Mountains on the White River.

On the day that was supposed to be about rest and making final preparations with your tackle and game plans for day one of the FLW Tour event on Beaver Lake, Morehead has been scrambling to replace and repair broken equipment on the front deck of his business office — namely his Ranger Z520. 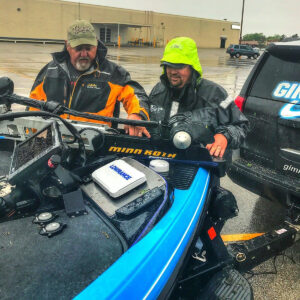 Fortunately for Morehead, the tree fell about as well as any angler could hope. It fell across his front deck on his Minn Kota Fortrex trolling motor and Lowrance graph and brackets. It broke his graph, his mount as well as the trolling motor bracket and bent the shaft of his Fortrex. Still that’s pretty good odds considering it missed his tow vehicle that was inches away as well as the console and motor of his boat which could have rendered it unusable for the first day of the event. And how about that Fortex shaft holding the weight of that tree and getting slightly bent.

As of noon, Morehead was getting the trolling motor, graph and mounts replaced, and he expects to be able to use his boat tomorrow in competition.

A rough round of storms has been passing through Arkansas today and had anglers scrambling for awnings, gas station canopies, car washes and other covered areas to work on tackle and make last minute preparations in somewhat dry and protected conditions. Folks forget the other side of fishing for a living which is hundreds of hours towing a boat across the country, enormous expenses and often dealing with weather and other variables well outside of your control. 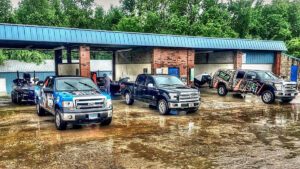 Morehead has had a few close calls in the Ozarks. A tornado pass directly over the place he was staying at a Costa FLW Series event on Table Rock several years ago and FLW cancelled the event as several anglers had severe damage at that event too. A hill probably saved his bacon in both weather events. The slight hill and branches of the big oak today helped support some of the weight of the tree. And at Table Rock, his place was on a hill side that protected them from the path of the tornado as it “jumped” over the hill when it crossed.

Hoping everyone stays safe this week on Beaver Lake and Ross Barnett Reservoir.