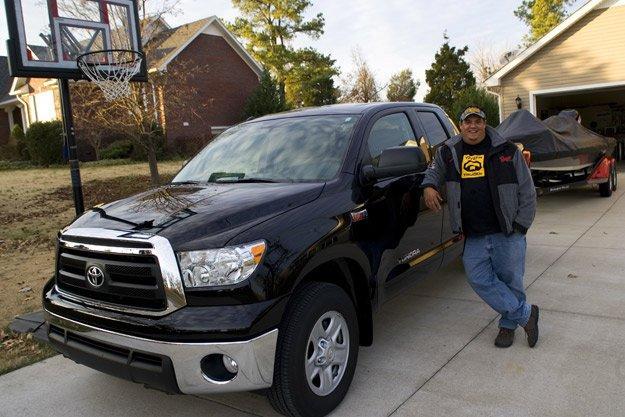 Toyota recently signed an agreement with Wired2Fish to advertise in 2011. A top truck brand among professional anglers and weekend anglers alike, Toyota has come on strong in recent years with it’s support of fishing and fishermen.

“We’re thrilled to get this deal done,” said Jason Sealock, VP of Content and Technology for Wired2Fish, Inc. “Toyota and the agencies that represent them are great people who love fishing and share the same core values that we do. The dealerships we’ve been to, their ad agencies, and even their racing division, everyone we’ve come in contact with or worked with around Toyota have been above and beyond our expectations. They are extremely humble but extremely passionate. Two great qualities we share.”
Sealock recently documented his truck purchase on Wired2Fish’s Facebook page. He wanted to support a company that supported fishing, which narrowed it down to Chevy and Toyota because they supported fishing. After talking with several pros he trusted and test driving some vehicles, he went with the Toyota Tundra truck. This was all done prior to Toyota and Wired2Fish working together. It was a personal choice.
“I recently bought a 2011 Toyota Tundra,” Sealock said. “I went ahead and got the big engine because I pull a Ranger Z520 down to Guntersville, over to Missouri and Arkansas and back and forth to Kentucky, Barkley and Dale Hollow Lakes in Kentucky. It pulls the Ranger around with ease. I forget the boat is back there at times. But my favorite features are the back-up camera and the Bluetooth connectivity. I talk on the phone on long trips with both hands on the wheel and no phone on my ear. And folks that   talk to me say it sounds like I’m on a handset. My music even plays off my iPhone through my truck with no wires attached.”
We look forward to working with Toyota and their stable of top-tier anglers.
Next