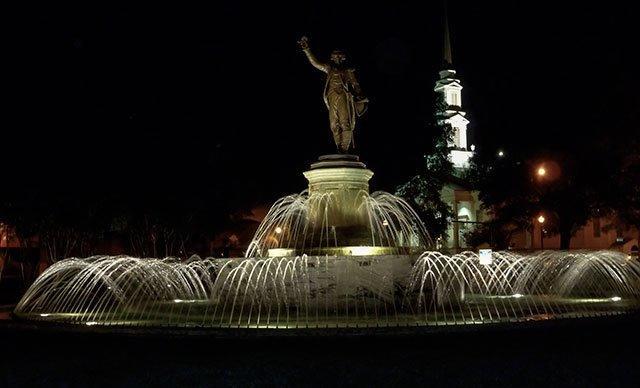 The North Star, has followed me south.

Whenever I’m on the road, at night, before I go inside, I always hit the Google Sky App on my ‘droid, and point it upwards.

To find the North Star â€¦ the 48th brightest star in the sky â€¦ and when I find it, I smile, and say silently to myself, “Goodnight â€¦ Love Ya,” to my family who lives below it.

To what has become my second home.

And The North Star, shines on both.

Shines on all of us, cradles us, sees not states of red, states of blue, just, our state of being.

To the stars in the Northern or Southern skies, we are all one.

Bathed in the same light from above.

It has been 2 months since I walked among the rows of wrapped bass boats, been 8 weeks since I have heard of flippin’, pitchin’, large and smallmouths.

Back at the 2013 Bassmaster Classic, I was hobbled by a bad knee and on Monday, Feb. 25, on the way home from it, somewhere in Chicago’s O’Hare Airport while making the trek from Gate C-20-something to Gate F-something â€¦ the knee blew up.

I used my rolling luggage bag as a crutch to get to the plane.  Back home an MRI revealed, two stress fractures in the knee, my doc said, “Dude â€¦ it’s like you have been walking on a fractured leg.”

I was given a choice, 8 or so weeks in a cast, or several weeks stuck in bed, no weight bearing on the knee.

I chose, bed, and from my bed I went to sleep at night with only a distant view of the southern sky.

Back 6 or so years ago when I was at ESPN, frankly, I didn’t want to be there, after 15 years of some of the good, but mostly the bad, of sports, I was done.

These past 2 months I thought a lot about back then, had I been at ESPN and gone through the year I just went through, Prostate Cancer, Brain Tumor, blowed up knee â€¦ would I have fought as hard as I did to get up and out of the bed I was confined to.

To be honest, I had been with ESPN long enough, had enough benefits and insurance, to just stay there in bed â€¦ filed for permanent disability â€¦ and been done with it.

A golden handshake ends the career.

But lying there in the guestroom so as to not bother Barb with the crutches and braces and the every 4-6 hour dosages, I was in another part of the house, the part that faced,

And it was that sky, that got me out of bed.

Now many of you, especially the guys, would think I would be out of my mind to care less if I ever went back to what I used to call, The-All-Guy-Double-Boner-Network.

But it became a job.

A job not unlike bolting bumpers on trucks in some factory.

Just a job â€¦ a great paycheck â€¦ worked with a few people who have become lifelong friends â€¦ free tickets to Disney,

but, just another chrome bumper coming down the line.

I had always told Barb, that I was happy that my career was working out at the end of it, instead of in the beginning.

The beginning pretty much sucked.

I was different when different got you 13 weeks of unemployment.

But, if you just happen to be able to survive it for long enough, normal becomes bad and different becomes good.

And so it only took me a decade to become an instant success.  But with that success, came unhappiness.

You don’t get up if you are unhappy â€¦ not the kind of get up you need to do this â€¦ follow those who chase dreams lake to lake across this country.

I now know in my heart, the universe knew what it was about to put on my plate, knew that if I was ever to get up out of bed from the body blows, I needed to be happy â€¦ successful made no never mind.

So â€¦ it sent me here, to learn that the only true success â€¦ is happiness.

So â€¦ it sent me here, for the knockdown that was coming my way.

So â€¦ it sent me here, knowing that HERE, would be what would help me get back up.

And it showed me so, when it stuck me in a bed,

Happy to be back,