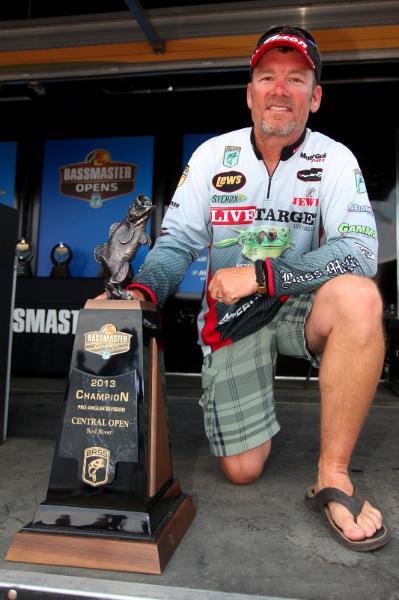 Catching last-minute fish has become a habit for Bassmaster Elite Series Pro Stephen Browning in tournaments lately, and today it paid off in a victory on the Red River.

The Arkansas pro relied on divine intervention to jump from the 12th  spot to first place in the Bass Pro Shops Bassmaster Central Open.  Catching a total weight of 16-pounds, 10-ounces on the final day earned Browning a $40,000 Triton/Mercury rig and $7,979 in cash. The victory also secured Browning a berth in the 2014 Bassmaster Classic if he fishes the last two Central Opens.

â€œThe good Lord blessed me to even be standing here today,â€ Browning said.  â€œYesterday, with about 5 minutes left, I caught about a 5-pounder and only had two fish. I don’t know why, but during the last two tournaments, right at the end of the day when I really needed one, sometimes I would just say a prayer, and He answered them. He answered them today because I was struggling big time.â€

Browning said he had some bites in the morning at his first stop, but he later made a long run. When he went two and a half hours without catching anything, Browning decided to run back to his first spot.

â€œThe key today was a simple bait change. I should have had 20 pounds yesterday, but I lost some big ones. This morning, I lost two big ones, and I thought something was not right.”

Browning had been using a sexy shad square bill crankbait but decided to try another brand of the square bill in the same size and color.

â€œI guess it just had a different wobble to it because they just choked it,” he said.

Retrieving the crankbait at high speed in an erratic fashion, Browning keyed on driftwood laydowns 3- to 5-feet-deep close to sandbar drops. â€œI crashed it into everything I could possibly crash it into,â€ he said.

Most of his strikes came after the lure deflected off the wood.  Earlier in the week, Browning caught some of his keepers on a Z-Man Chatterbait.

Ernie Smoak of Louisiana, who competed in the tournament as a co-angler, relied on a tactic he calls the Smoke Dog Drag (slowly dragging a Strike King Rage Tail Craw) to catch limits the first two days. He had to swim the craw today to catch another limit that clinched a victory for him in the nonboater division and earned him a $25,000 Skeeter/Yamaha rig.

The Carhartt Big Bass winners of the tournament were David Sherrer of Louisiana in the pro division with an 8-1 largemouth, and Russell Rogers of Arkansas in the co-angler division with a 6-2 largemouth.

Winners of the Luck-E-Strike Heavyweight Bag of the tournament were Mike Pedroza of Louisiana on the pro side with 17-1 and nonboater Kim Giddens of Alabama with 10-15.

The Livingston Lures award of $250 for the Day 2 leader went to Mike Pedroza of Louisiana for being in first place on Friday. The co-angler leading on Day 2, Smoak, receives $250 in Livingston Lures’ product.