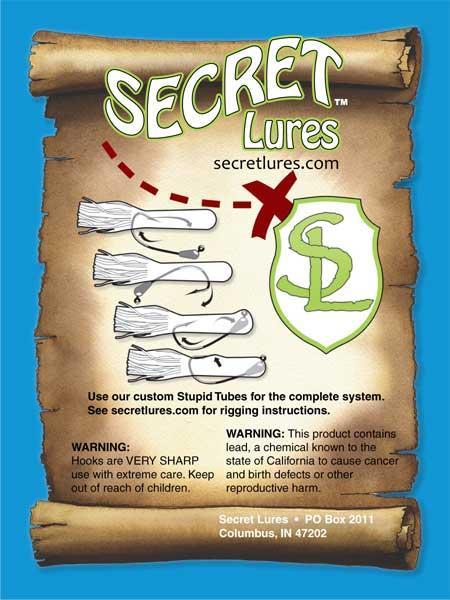 Well we ran a piece today that mentioned the Stupid Rig for Tubes made famous by Terry McWilliams in a few BASS tournaments and the Classic several years ago. After that we had several people asking what a Stupid Rig was and what it looked like. We apologize as we thought more folks were familiar with the rig. As luck would have it we got a good illustration of the rig today.

The beauty of the Stupid Rig for a tube is that you can still get that spiral fall of a tube in a jighead but also get a weedless rigged tube. So it’s the best of both worlds. But there is definitely an art to rigging it right.

Our buddy Nathan Gray at Secret Lures was kind enough to share the back of his Secret Lures Stupid Tube Jigheads.

Nathan actually worked with Terry McWilliams to design the heads perfectly. That rig was used with another tube and jighead to win the Jet-a-Marina Classic two weeks ago on Kentucky Lake. Fact be known, the Stupid Rig on Tubes has won a lot of tournaments on Kentucky Lake and other lakes across the country.