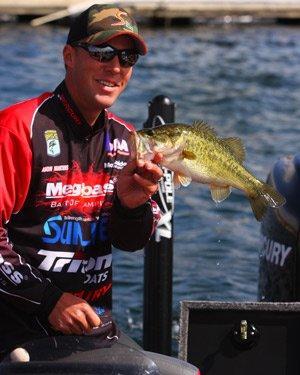 So far we have had two segments of our three-part feature with Aaron Martens talking about the advantages of the new class of electronics and the value they provide to the angler today.

Starting in the early days with flashers, going to paper graphs and now today with the latest electronics that include side imaging, we have seen a major revolution in fish finding, and the new electronics have taken a foothold with both weekend and professional anglers alike.

Having the ability to quickly look at a spot, determine if fish are present and ascertain how the structure lays  is critical to cutting down the time between bites and can be the difference between winning and losing.

In part three of our series, we will discuss with Martens what the new breed of electronics has done for his fishing from a personal standpoint and get examples of how he found winning fish using them.

W2F: Aaron we have spoken a lot about the units and why you like them. Reflect back, if you would, and give us some specific examples where your electronics were the difference.

Of course one tournament that sticks out is Guntersville, where I won the Elite Series event. I found more than 30 good schools of fish during that tournament using my electronics. Very simply, I found every spot because of my electronics.

I always try to look for things out of the ordinary. I am always looking for things that are not noticeable above the water. Underwater hidden points, brush piles, stumps, nooks in a creek channel bend, rocks, gravel bars and leading edge shell bars can stack bass up. During that event, shell bars were the deal. Using side imaging, I could see the â€œglowâ€ of the shells, even in grass, and pinpoint where the bass were positioned.

When I found a ridge of shells or a hole in the grass that was close to the channel, I found bass, and there were some very large schools using them. I also like to have current on these spots. It really cleans them up, and you can easily recognize them as â€œblurry bright white spotsâ€ on the graph. River lakes have a bunch of these but there are little things that make the good ones stick out. I like a mix, in and around the shells, with grass. Grass is easily seen with side imaging, and when you have both grass and shells, it usually means bass will be close.

W2F: What are some of the tricks you use to find these spots?

AM: I almost hate to give this one up, but going after dark can be one of the best ways to learn your electronics. You can see detail much better, and everything is much more pronounced when it is dark out. A lot of guys fish from dawn to dark, but I have stayed out even later to really look at a spot better.

As we spoke about before it is also very important to look for little things. You have to know the difference between a school of carp and a school of bass, and it can take some time. You have to able to see them against a background, and I use â€œshadowsâ€ to determine size and species. The angle of the shadow can tell you where the fish are. I look for them specifically. Fishing against an uphill bank can make it a little tougher, but the more time you spend looking and adjusting sensitivity and contrast will make the fish jump out at you on the screen.

Finding the piece of structure like a foundation, an old bridge or a vertical object is clear, but it takes detail observation to determine where the fish are positioned.

W2F: Would side imaging have helped you at the Pittsburgh Classic where you took second?

AM:    Absolutely. I could have pinpointed where those fish were on the pilings and rocks I was fishing and made every cast better as a result. Every cast was important there, and Side Imaging would have been a big advantage. They had not introduced side imaging yet, but it would have been huge on a very tough fishery like Pittsburgh. I also could have adjusted quicker if I had that technology. If a bass repositioned, I could have adjusted instead of just blind casting.

W2F: What are some of the other things you get fired up about with the new electronics?

AM: The first guy on the Elites that had side imaging was Steve Kennedy. I asked him about them and he was super quiet. I knew right then, I had to have them.

I find 80 percent of the fish I catch with side imaging. Side imaging is like looking at the lake without any water in it, and that is a big deal. I have found six or seven boats, umbrellas, lawn furniture, and bicycles using it.

One of neat things I remember is catching bass in 130 foot of water at Shasta and Oroville in California. Oroville has water that is more than 800 feet deep. I was looking for pond smelt, a native bait fish to California, and found them in ultra deep water with bass below them. I caught suspended bass at 130 feet, and that is crazy. I have to believe those may have been some of the deepest bass ever caught. I have seen bait below 200 feet, and that is amazing to me.

AM: To be honest I haven’t really gotten the schedule straight in my head yet, but I know we are going to Florida and that means shell beds. With Harris Chain and the St. Johns River, electronics could play a major role, so I guess as I always believe, they will have a major impact.