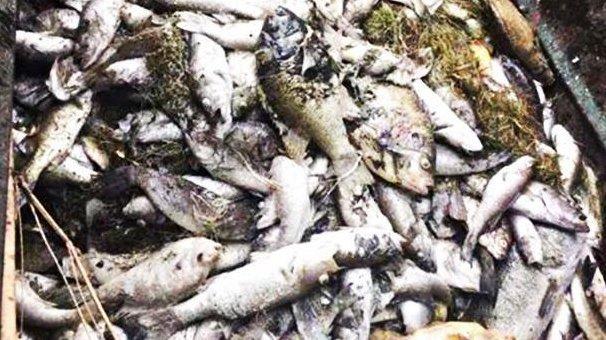 For 22 years, California big bass legend Joe Everett has been fascinated with chasing a unicorn. That unicorn is a 22-pound, 6-ounce bass that he has seen many times, both in his dreams and on trophy lake of choice, Lake Mission Viejo in California. His passion, his motivation and his desire to break the world record bass in the United States is storied. Although many call it an obsession, I call it simply â€œwhat he lived for.â€

That dream, however, vanished in the past couple weeks when â€œMissionâ€ had a Golden Alga bloom and the lake has since been decimated. The unicorn became a demon and thousands of game fish including very large bass, bluegill and bait fish all died as a result. With their deaths Joe Everettâ€™s dream died with them. Everett, a one of a kind big bass hunter has a heart every bit as big as the dream he had about them and the lake he chased them on has had a major setback.

â€œMy dream is over,â€ Everett said. â€œThe kill has taken everything and now my quest will have to be taken up by someone else, I have even put my boat up for sale that was designed specifically for Mission. Itâ€™s over.

â€œIt truly wasnâ€™t about the big bass record as much as the potential of it coming from my little lake. This lake was full of small bass too and that gene pool has been destroyed. Hard to imagine that in one week, the bass all lined up and died from an algae bloom, but they did. I am sure some will survive but based on what I have seen at the lake, it wonâ€™t be many.â€

The golden alga has taken its course, but droughts and political aspirations were working hard long before the recent bloom to utilize the water and potentially kill Mission anyway.

Since the early 1970s the battle between recreation versus drinking water has been heated. Everett watched this intently while spending every free moment nurturing and chasing a world record bass he knew lived there. Involvement and legal proceedings on numerous occasions including the recent Proposition One where California residents approved an aqueduct system to bring water from northern water supplies like the California Delta. There is no question there is a line of demarcation being drawn regarding political interests and recreational interests who paid for water to keep Mission full.

Golden Alga, Prymnesium parvum, attacks gill breathing organisms through a toxin released when it blooms. It rapidly spreads and basically kills the aquatic organism from the inside. They basically bleed to death and die from lack of oxygen. Little is known about why and when but â€œgoldenâ€ blooms typically occur during the winter and spring months with water temps from 55-80. It can be spread by birds, the transport of water or even strong winds from dry lake beds. The Carolinas, Wyoming, Georgia, Texas, Arizona and California are states where these fish kills have occurred. 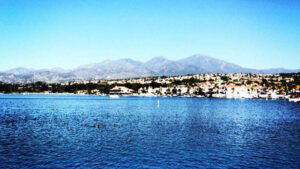 Lake Mission Viejo is a 124-acre lake surrounded by mountains and million dollar homes near Irvine is Southern California. Maximum depth when full is 70 to 80 feet. It is a jewel of a bass lake for numerous reasons but mainly is due to Florida strain bass and trout stockings that allow these bass to grow to huge proportions quickly.

Natural cover, docks and man-made structures are the main cover in the lake and a marina refuge where no fishing is allowed and also lends to allowing fish to mature and grow to enormous sizes. Golden Alga has destroyed it, but it will rebound, just not in time for Joe Everett to enjoy its bounty again, at least in the way he has for the last several years.

Since the lake was filled, Joe Everett has been the vigil overseer of the lake and the green finned inhabitants of it. Not only has he stood watch over the care and feeding of these fish but also has become a legend to all anglers across the country for persistence, big fish catching abilities and intimate knowledge that this tiny gem of a lake held the next world record.

When he was awake he was in pursuit of that fish whether on the lake or not. He cut a unique industry swath for those like him as a result not from winning tournaments but from having a deep passion for one single fish and spending every waking minute in pursuit of it. That is very special in my book.

The pursuit is as important as the conquest and that pursuit has cost him. The fish consumed him, he lost friends, chose his own path that was bumpy at times and his focus was sometimes misunderstood for cockiness.

He dumped the world record several times. Looked at her many times too, but his undying spirit of the pursuit never wavered. Mission gave him a dream, and he willingly shared that with the world. A surfer, a surfboard builder, a Harley rider and big bass aficionado all in one person. That is Joe Everett.

I have known Joe for several years and we talk a lot of about ghosts, wizards and dragons. We talk about chasing dreams and living each moment. We talk about obsession and passion and we also talk about patriotism. We cut up, get teary eyed and talk about giving back. For Joe, his dream of a world record bass at Lake Mission Viejo may be over but I am willing to bet that his broken heart for this lost lake will be replaced with a heart filled to help others with this conquest.

Spirits like his canâ€™t be put down for long and even though his rainbow has gone away, that pot of gold he was chasing still burns deep in his soul. Those of us that are dreamers know it. Itâ€™s a deep feeling that cannot be replaced with anything else.

For some reason I gravitate to people like Joe. Undying passion, a unique and a free spirit, a cigarette, a beer and a dream.

Donâ€™t give up on chasing unicorns Joe, we are counting on you to give us all hope that one exists.