File this in the craziest bass catches ever category. But a Texas angler, Matthew J. McNellis was fishing some trees behind the Highview Marina on Lake Bardwell in Ennis, Texas on May 8, 2017, when he caught a giant largemouth bass on a McDonald’s Chicken Nugget attached to a jug line for catfish. The bass measured 24 1/2 inches long and weighed 10.802 pounds, besting the current record bass of 10.44 pounds caught back in 2006 on a minnow.

McNellis had the fish weighed and photographed at Highview Marina before releasing it back into the lake to be caught another day. This might be the craziest bait we’ve seen catch a big bass weighing more than 10 pounds.  Be interesting to know if this bass often fed on food around the marina. Looks like she’s eaten a few chicken nuggets in her day.

What’s the weirdest bait you’ve seen catch a giant bass like this? 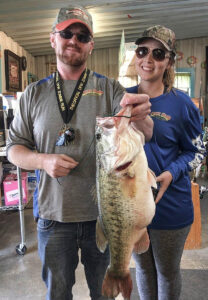