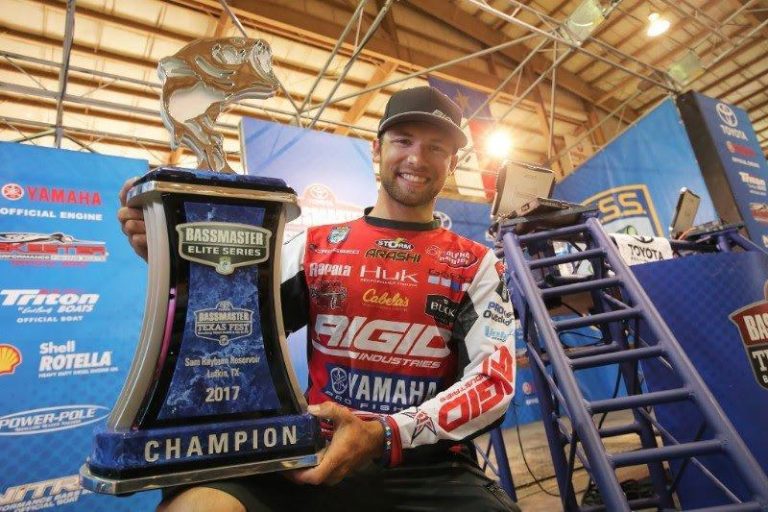 It’s not like Brandon Palaniuk had never won a Bassmaster Elite Series event.

Coming into this week, the 29-year-old pro from Idaho had already claimed Elite Series trophies in 2012 and 2013 and came close to raising that win total with three other second-place finishes.

But for an intense competitor known as the “prodigy,” the four-year victory drought was an itch he desperately needed to scratch — and he did it during this week’s Toyota Bassmaster Texas Fest benefiting Texas Parks and Wildlife Department.

Palaniuk caught 24 pounds, 7 ounces of bass during Wednesday’s opening round and followed with 23-2 and 24-7 the next two rounds. Then he caught he caught 21-12 on Championship Sunday to push his four-day total to 93-12 and hold off a late charge by California pro Brent Ehrler.

Ehrler, who led the first two days, finished second with 91-12.

“I never found a school in practice where I could just go and pound on them and catch multiple fish in one spot,” said Palaniuk, who earned a $100,000 first-place prize and an automatic berth into the 2018 GEICO Bassmaster Classic presented DICK’S Sporting Goods. “It wasn’t until the tournament started to roll around that more and more fish started to transition out and school up on spots.

“I was just far enough ahead of the fish.”

It was a sign of things to come for Palaniuk when he started Wednesday’s opening round with his biggest fish of the tournament — a largemouth that weighed 8-4. Palaniuk caught the bass in deeper water than what was being fished by most of the field.

That gave him the confidence to stay away from the shallower areas that were holding incredible numbers of bass, but not necessarily the size it would take to win.

“I was torn between deep and shallow,” he said. “There were so many fish shallow, and you could get so many bites, but I just wasn’t getting the big fish that I needed. I just kept telling myself the big fish were out deep, and if I could stick it out and get five to 10 bites a day, I could have a chance to win.”

Palaniuk said he spent a lot of time idling around looking for the usual summer postspawn hot spots, like the tips of points, humps and ledges.

He found lots of smaller fish on those places. But while moving from spot to spot on straight banks, he found a several brushpiles on his Humminbird electronics with incredible numbers of crappie and one or two bigger dots that he believed were bass. In that situation, he used a Neko Rig with a Zoom Magnum Trick Worm — and immediately caught a big fish.

Palaniuk was throwing the Neko Rig on 15-pound Seaguar braid with a 10-pound fluorocarbon leader. Since many of the fish were in brushpiles, he wasn’t able to put them all in the boat.

“I knew that if I was hooking 8- or 9-pounders in brushpiles on that lighter line, there was a chance I was going to lose some,” he said. “Those fish are so strong, and that stuff is so thick. And it wasn’t like I was fishing the outsides of it. I was throwing directly into it and trying to get it to drop directly down into the center where the fish were.”

By the final day, he seemed to have all of the kinks worked out of his technique.

“Today, I had the least amount of big bites I’ve had all week,” he said. “But I executed 100 percent — and that was the difference maker.”

Palaniuk’s key bait for shallower, more aggressive fish was the size 13 Storm Arashi Top Walker in the pro blue color pattern. For deeper fish — since he couldn’t get bass to bite a crankbait — his top two lures were a 10-inch Zoom Ol’ monster worm in the plum color pattern with 1/2-ounce VMC tungsten weight pegged with a VMC stop on a 5/0 heavy-duty VMC extra-wide gap hook, and a Neko Rig Zoom with a green pumpkin magnum trick worm on a 1/0 weedless Neko hook that will debut at the annual ICAST fishing industry trade show in July.

Though Ehrler finished 2 pounds away from his first Elite Series victory, he didn’t go home emptyhanded. For catching the Toyota Big Bass of the week — a 9-1 largemouth on the first day — he earned a $50,000 Toyota Tundra pickup truck.

Oklahoma pro Jason Christie finished seventh in the event and came away with a solid lead in the Toyota Bassmaster Angler of the Year standings. Those standings will largely determine the participants for the 2018 Classic — something Palaniuk is glad to have already sewn up.

He said that means he’ll be more relaxed as the scheduled swings back toward the northern lakes where he learned many of his tricks.

“It allows me to gamble on those smallmouth fisheries, which is absolutely my favorite thing to do,” he said. “I won’t have to be looking at the standings, and that won’t bother me at all.”

Jason Christie was awarded $1,000 for the leading the Toyota Bassmaster Angler of the Year points race at the end of the event.

Christie also earned the Power-Pole Captain’s Cash Award of $1,000 for being the highest-placing angler who is registered and eligible and uses a client-approved product on his boat.

Ehrler also earned $500 as the recipient of the Livingston Lures Day 2 Leader Award.