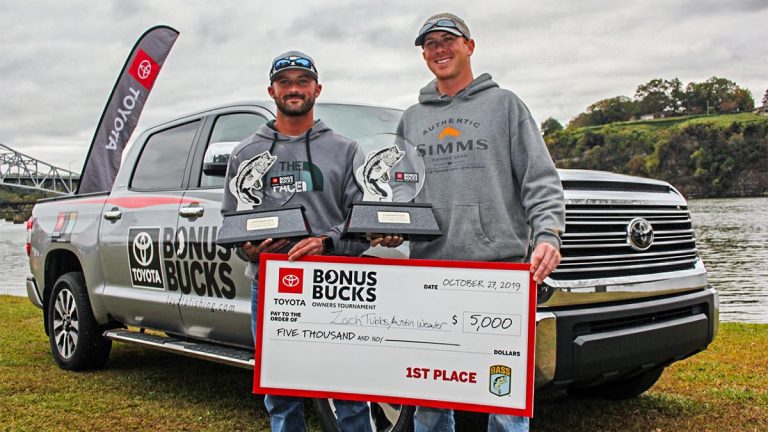 Zach Tubbs and Austin Weaver make their living as utility linemen, and the two proved they were hard-wired to Pickwick’s legendary smallmouth population with a dominating 5-bass limit that weighed 22 pounds 13 ounces to win the 8th annual Toyota Bonus Bucks Owners event in Florence, AL.

They won the 200-boat tournament by four pounds, relying on tons of time on the water that yielded more than 20 honey holes. They hauled home a $5,000 check in the no entry fee, prize rich, event that guarantees a paycheck to the Top 30 teams in which only one team member is required to be a registered Toyota Bonus Bucks member.

“We covered more than 60 miles of water and hit 20 to 30 spots to catch our limit,” said Weaver. “There’s so many awesome fishermen on Pickwick that very few secret holes remain, so you have to hit a ton of them and cover lots of water to catch five good ones.”

Their lure selection was a one-two punch consisting of topwater baits up shallow, and a heavy ¾-ounce War Eagle spinnerbait in 18 feet of water with blades matched to the size of Pickwick’s shad.

When asked what he loved most about his 2016 Toyota 4Runner, Tubbs replied, “It’s a comfortable ride, but mostly, I love the fact I’ve put 70,000 miles on it and it’s never been in the shop for a repair.”

Tubbs and Weaver certainly weren’t the only winners on the shores of the Tennessee River. Three teams were randomly drawn for $500 cash reward from Toyota, the 31st place team got the LEER Truck Caps “Lucky Dog” prize of $750, and the two teams that tied for 15th place each received a $500 Bass Pro Shops gift cards. Plus, Tyler Mayhew took home a $500 Carhartt prize pack for catching the event’s biggest bass that weighed 6 pounds 4 ounces.

Two full days of rain, strong winds, and changing temps prior to Sunday’s competition made the event challenging to anglers and organizers, but after the last bass was weighed, hundreds of loyal Toyota owners who love bass fishing drove home with an electric grin.