Lake Hamilton proved very stingy during the three-day tournament due largely in part to the extreme heat-wave that gripped the midwest most of September. Still in late summer patterns, the crappie were few and far between. But the team of Tony and Mike Sheppard of Murray, Kentucky figured out how to catch quality each day by targeting white crappie relating to brush on deep humps and black crappie relating to brush on points in the Little Mazarn arm of Lake Hamilton. 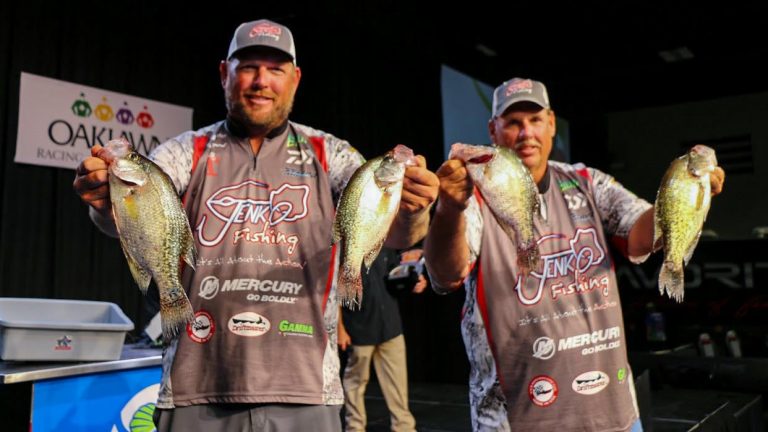 “We spent four days idling and graphing the whole lake, marking as many piles as we could find,” Tony Sheppard said. “Then we would go back and fish them. There were small spotted bass and some huge bluegills suspending above so many of the piles.

“I really got dialed in with my electronics this week and was able to tell bluegills apart from crappie apart from small spotted bass. Then we figured out we had to have perfect boat control and sit about 30 feet off the piles and cast 1/16-ounce black Jenko Big T Slasher heads with dirty milk Jenko Big T Fry Babies on a rod I designed just for this technique called the Jenko Big T Trick Stick. Then we worked it as slow as we could through the piles.

“What we figured out was there would be 4-5 crappie buried in those piles and you had to make a perfect cast and presentation. If you didn’t do that, you’d pull those fish out of the pile, and then they wouldn’t set back up the same and you couldn’t get a bite. But if you got your jig down in the pile and slowly worked it through the pile, you could catch one fish. Then we would move to the next pile.

“We caught 7 white crappie the first day including the big fish of the tournament and most guys didn’t think white fish would even play.”

The Sheppard brothers caught a limit of 7 crappie weighing 11.77 pounds including the 2.02 pound big crappie of the tournament. The second day they only fished for a few hours, got their limit and left their areas alone for fear of burning out their fish before the third day. Their day-two limit was a lot smaller at 8.93 pounds, but they still extended their lead to nearly 3 pounds.

The final day they ran their best area and had a limit by 9AM that weighed 10.36 pounds, and the Sheppard brothers knew they had enough to put it away. So they idled back to the ramp and waited for weigh-in. Their three-day total of 31.06 was enough to best the second-place team of Zeke Anderson and John Soukup who weighed 21 crappie that weighed 27.14.

“I knew when we caught our 9th keeper on Sunday morning, that we had enough to win it,” Tony Sheppard said. “It was just a great week where I learned a lot about reading different fish on Panoptix. I was gaining confidence during the event because I would see guys leave piles I wanted to fish, and I would pull in behind them, watch the fish on Panoptix and watch the fish settle back into the piles. Then I would get Spot-Locked in the right place and make a good cast and immediately catch one before going to the next pile.

“It’s funny in practice we weren’t sure what to do, and I saw a dock that had a ton of rod holders and crappie rods on it and knew that owner would have crappie piles near his dock. We pulled over to fish and a guy came out and said, ‘I feel sorry for you guys.’ I said, ‘why is that?’ And he said, ‘you can’t catch crappie here when it’s hot like this.’ That wasn’t great to hear but it’s funny how we found a small area that was holding some better white crappie because we didn’t know any better.

“We just fished like we would at home on Kentucky Lake, and it worked out.” 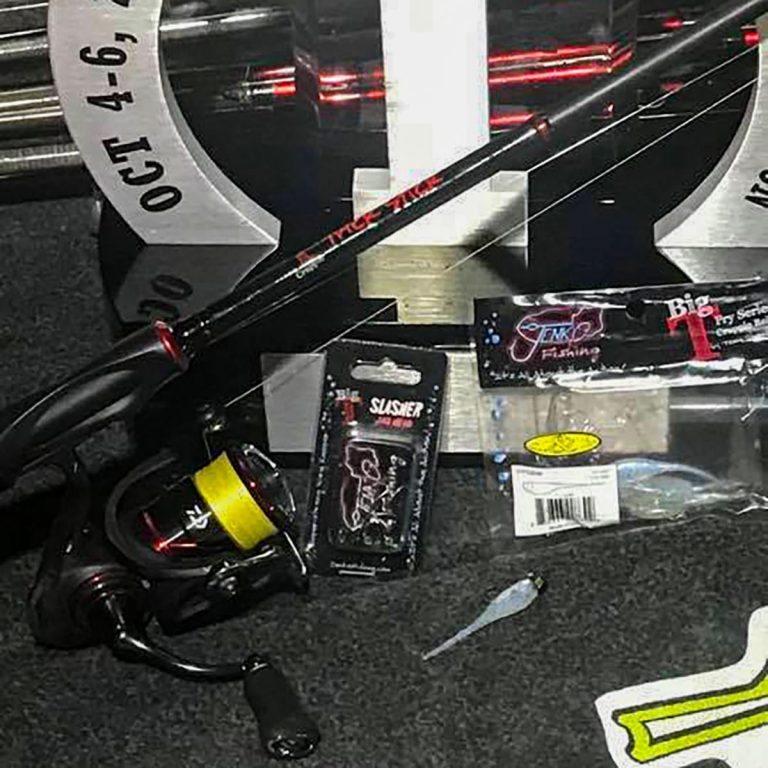 Tony Sheppard noted a few details that were key to them winning the biggest purse in crappie fishing.

“Figuring out how the crappie were relating to the brush around the other fish like bluegills and spotted bass and presenting the bait in a way that didn’t spook the fish was everything. But as crazy as this sounds being able to feel the bites on my reel was a big deal. I told some other guys I got a $300 Daiwa Ballistic reel for my Trick Stick and I am convinced I could feel bites on that I would not have felt otherwise.

“I’ve always just used whatever cheaper Daiwa reels I could find for crappie fishing. I’ve used even cheaper reels at times because I didn’t think the reel even mattered, and this opened my eyes up to being able to feel bites.

“I also downsized to 4-pound Gamma fluorocarbon leader on my 10-pound braid. When I went up to 6-pound line I got a lot less bites. I don’t know if it just slowed the fall of the jig or what, but it really seemed to matter.

“Guys probably think it’s crazy to use a $400 combo for crappie fishing, but it was definitely worth it to me.”

You can find full results and more details about the Crappie Expo at CrappieExpo.com.