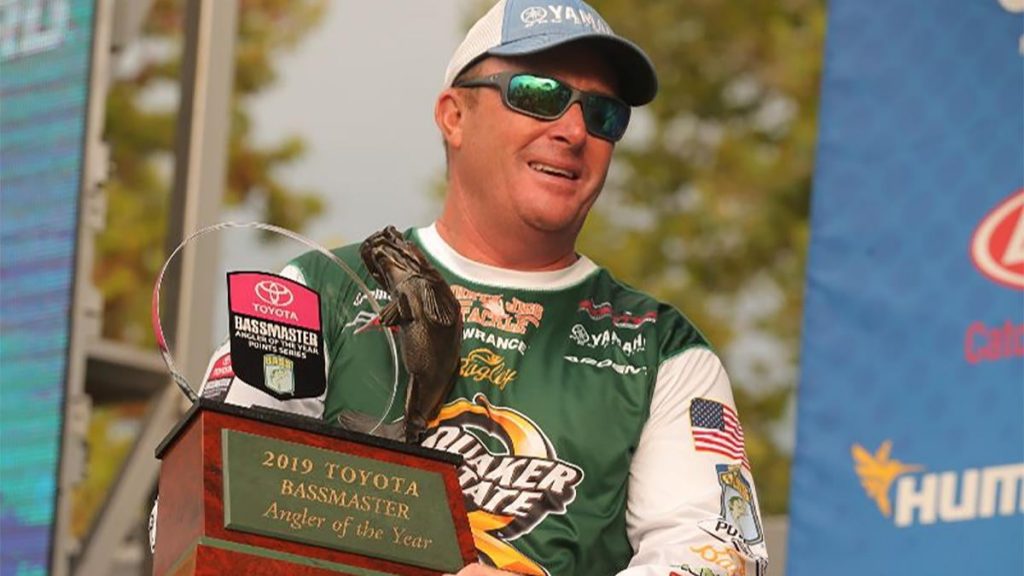 To him, the stars of that show – people like Bob Cobb, Ray Scott and Denny Brauer – are the true legends of professional bass fishing.

Now, he has forever claimed his own spot alongside them in B.A.S.S. history.

With five bass that weighed 19 pounds, 12 ounces during Tuesday’s final round, Canterbury pushed his three-day total to 59-4 and finished in 14th place for the week at the Toyota Bassmaster Angler of the Year Championship on Lake St. Clair.

More importantly, he finished at the top of the season points standings with 848 points, earning one of the most coveted titles in professional fishing and the $100,000 check that goes with it.

“My first goal coming into the season was to qualify for the Bassmaster Classic next year,” Canterbury said. “Angler of the Year is always there on the radar. It’s just way out there.

“You always set goals that you don’t think you can reach – because if they’re easy to reach, you didn’t set them high enough.”

Canterbury was faced with his share of hurdles throughout the year, but he always seemed to have just enough in his tank to clear them.

After a tough first day at the regular-season opener on the St. Johns River in Florida, he rebounded with a ninth-place finish. From there, he placed 11th at Georgia’s Lake Lanier, 22nd at South Carolina’s Lake Hartwell and finished just 10 ounces shy of a victory during a second-place finish at Winyah Bay.

Then he had the kind of tournament that often sinks a competitor’s bid for the AOY crown, placing 49th at Lake Fork. But he followed it with a solid 22nd-place finish on Lake Guntersville in his home state of Alabama, and wowed fishing fans across the country by finishing third and 11th, respectively, in New York events at the St. Lawrence River and Cayuga Lake.

Before those New York events, he had never fished either lake

“I went into those events just hoping to survive,” he said. “But I ended up doing really well. I think that’s the way it happens sometimes in this sport. We deal with so many things that are completely beyond our control. If you just keep fishing hard, your day will come.”

Canterbury was thrown another curveball when the final regular-season Elite Series event that was scheduled for Fort Gibson Lake in Oklahoma had to be moved to Lake Tenkiller due to flood conditions. Again, he survived, finding two small offshore schools of smallmouth that landed him in 19th place.

Things beyond his control struck again Sunday, as he was forced to fish the entire first round without the use of depthfinders on the front of his boat. Canterbury still caught almost 18 pounds and managed to hold off hard charges from Arkansas pro Stetson Blaylock (840 points), Canadian Cory Johnston (840) and Texas pro Chris Zaldain (838).

Canterbury caught the majority of his bass for the week on a tube.

“That first day was such a challenge, and it could have caused me to fall apart,” he said. “But I managed to get through that and then used that tube to catch just enough fish to get by.

“It was anything but an easy tournament.”

Feider found a gigantic school of smallmouth on a flat with substantial current, and used a Rapala DT-10 crankbait in the Helsinki shad pattern to catch a three-day weight of 77-15. It was his second career Bassmaster Elite Series victory.

“It was basically just a flat with scattered rocks and sand, so I think the current was the biggest thing,” Feider said. “I’ve never seen anything like it before on Lake St. Clair.

“That DT-10 ran just the right depth. I was fishing 11 to 12 feet of water, and I don’t like hitting the bottom for smallies.”

One race that had already been decided before Tuesday’s round began was DICK’s Sporting Goods Rookie of the Year. That award went to Florida pro Drew Cook, who finished with 798 ROY points despite finishing just 36th for the week.

The tournament also decided the 42 Elite Series anglers who will fish the 2020 Bassmaster Classic, scheduled for March 6-8 on Alabama’s Lake Guntersville.

The last three anglers to make the Top 42 cut were Skylar Hamilton, Brian Snowden and Jake Whitaker. The first three out were Garrett Paquette, Clark Wendlandt and Kelley Jaye.

Feider claimed Phoenix Boats Big Bass of the week honors with the 6-12 smallmouth he caught on Day 1.

But the big story of the event was Canterbury and his AOY crown.

“I think about my wife, Dixie, and my daughter, Taylor,” Canterbury said. “I think about all of those days and weeks I’ve had to spend on the road away from them, and I can’t help but get emotional over this.

“As pro fishermen, this is why we do what we do.”