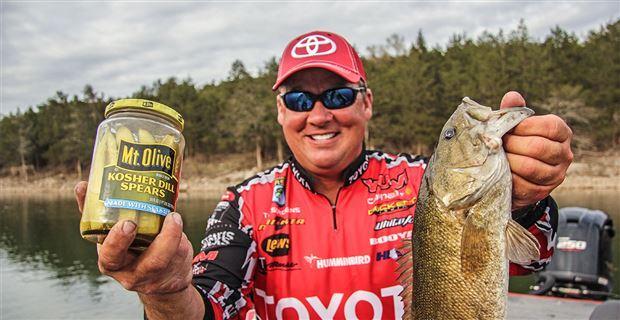 To say it’s hot and sweaty at the Bassmaster Elite at Potomac River presented by Econolodge is as much of an understatement as saying the Redskins are past due for a deep run into the playoffs.

The heat index will be 106 degrees during this week’s big derby, but don’t worry; Toyota pro Terry “Big Show” Scroggins has pickle juice.

Fact is, whether on the smallmouth waters of The Ozarks in early spring or the sweaty Potomac in August, the Florida pro is never without dill spears. But it’s the juice surrounding the spears that Scroggins values most.

“That’s my emergency muscle cramp kit,” Scroggins said. “I told my doctor that I drank lots of water and Gatorade, but I was still getting bad cramps in my hands and arms, and he told me about pickle juice.

“People think it’s just for hot summer when you’re sweating a lot, but as a tournament fisherman you get cramps in your arms and hands just from overuse whether it’s 45 or 95 degrees outside.

“Plus, you have the pickles to eat for a snack,” Scroggins said. And that’s a double bonus for a guy who loves to eat as much as he hates muscle cramps.