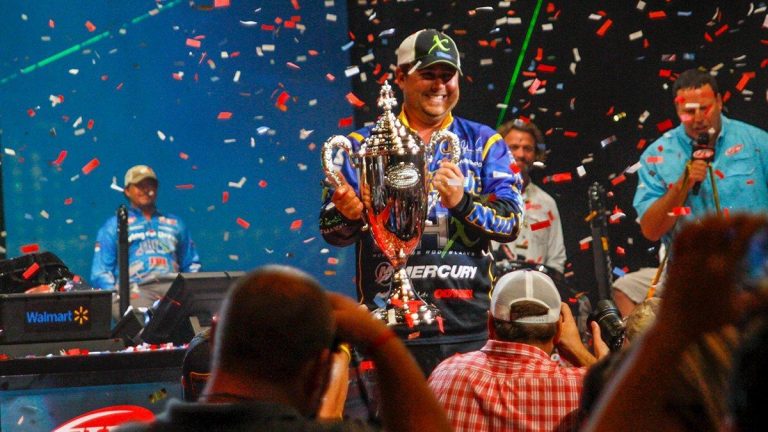 John Cox won the 2016 Forrest Wood Cup this week on Wheeler Lake with a four-day catch that weighed a total of 54 pounds, 13 ounces. Cox won $300,000 fishing from an aluminum Crestliner boat and pushing it further back into places that other boats just couldn’t get to. He’s fished the last few years out of an aluminum boat with no electronics other than a simple GPS. He has mastered going into shallow areas and seining them for all the resident fish in the area.

Here’s how the top 10 caught their fish this week: 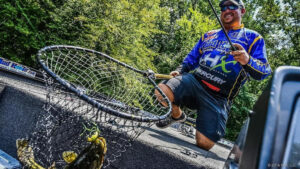 Cox’s key baits this week fishing the very backs of creeks were a Jackall Ioyobe frog in white and bluegill colors for the majority of his fish and then a handful came on a buzzbait and a Yamamoto Senko.

“Today I got back in my sweet spot and I set the hook on a fish on the frog and it was pulling drag and I was like this is her. And she pulled off. I thought I had lost it. Then I went 50 yards and a big one blew up and I set the hook and broke it off. I put on another frog went 50 more yards. A third big blow up and I caught her. Such an emotional last hour for me.

I got the best equipment so it just seems easy for me.  I built an FB885 MudHole Custom Rod to fish a frog this week, and I just put my head down and jacked those fish all week.” 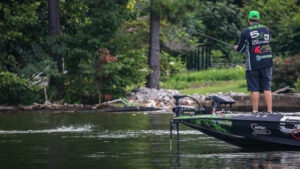 Neal mixed it up with a variety of topwaters including a Lucky Craft Sammy, a Lucky Craft Gunfish, a Heddon Super Spook, and a Rebel Pop-R.

“This is a mega school that lived out deep earlier this year and now they just moved up but they could live here all year. They have a pocket to spawn in, a deep ledge and then shallow feeding zones. I sat around for long period of times just watching for fish and then when I saw one I shot it out there right on the splash. 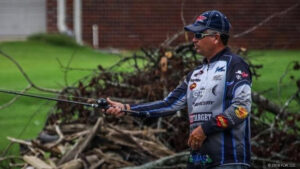 “I only lost one fish the first day, so I fished clean. But the backs of my creeks got muddy and it was really tough for me today. It stings a little to finish this one without a limit after catching better every day. I love fishing these summer championships.”

“I started out this tournament throwing a Damiki D-Pop the first two days. I went back through one of my areas the third day and picked up a jig and started swimming that jig out and caught 13 pounds, so they just got off that topwater bite and you had to be sub surface. I had to cover a ton of water.

“It was key being about to get up on pad in 1.8 feet of water with a T-H Marine Atlas jack plate and run in and out of spots fast all day with my Ranger and Evinrude G2 combo and just cover lots of water.”

I’ve been throwing an Accent Game Changer buzzbait with just a toad on it. I could skip it under trees and over logs. I flipped a 9/16-ounce blue swirl jig and Gene Larew Punch Out Craw as a trailer. I’ve been running the backs of creeks; that’s just how I grew up fishing and what I love to do.”

“I kept the momentum going into this tournament. I didn’t have a good practice. I had a few schooling spots that I didn’t think they were very good. Turns out they had some good fish on them. I just had to grind out to catch them this week. I eliminated the deep pattern. I didn’t go far enough back in the creeks like Cox did. I had to stick with my schoolers all week.

I was trying to cast 50-60 yards to where I saw a swirl so my gear was critical with Shimano reels and G.Loomis rods.”

“I caught 10 or so keepers today just like I have all week but the fish were all just small. I flipped all week. I don’t like to slow down and fish like that, but it was the only way I could get bites this week. I caught most of my bass this week flipping a Zoom Baby Brush Hog in Tilapia this week.”

“I fished some shallow and some deep. I fished a Norman DD-22 deep crankbait and a worm on structure spots the last two days because I felt like that was the only way I could catch a bag big enough to get myself back into contention. I caught a lot of fish through the week on a drop shot rig.” 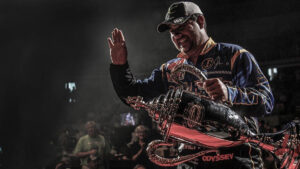 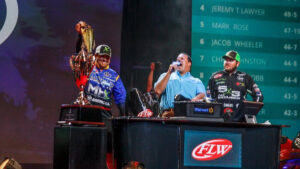