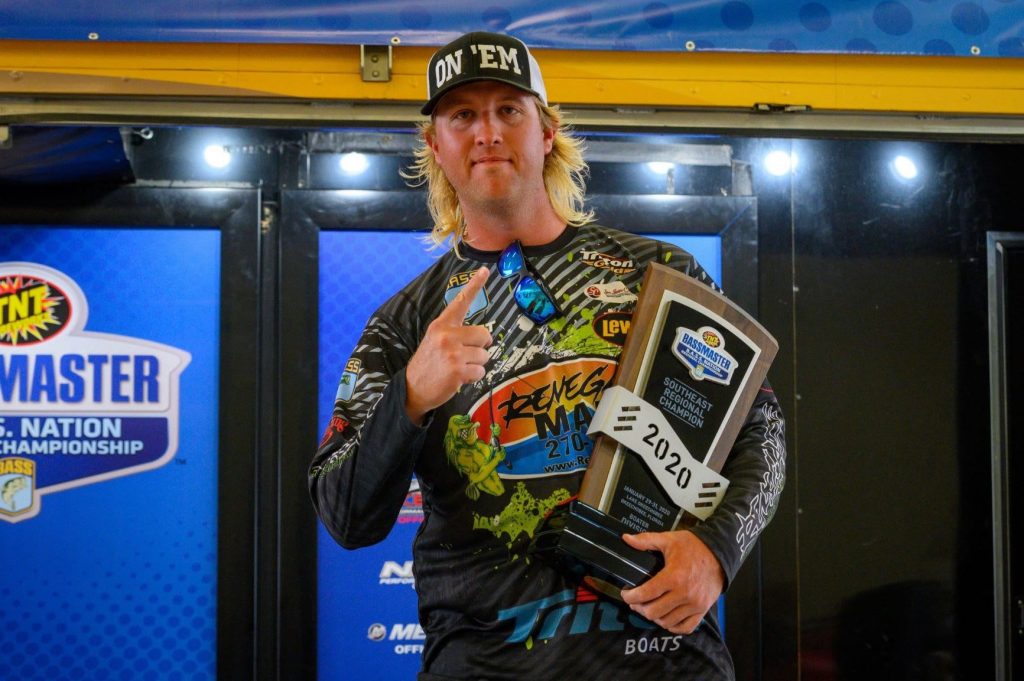 Faith in his area rewarded Matt Robertson with his biggest limit of the TNT Fireworks B.A.S.S. Nation Southeastern Regional on Lake Okeechobee and delivered the winning three-day total weight of 59 pounds, 14 ounces.

For his victory, Robertson, the angler from Kuttawa, Ky., who became a fan favorite for his onstage antics during last year’s Bassmaster Classic, earned $5,000 and a spot in the 2020 B.A.S.S. Nation Championship on Pickwick Lake.

Robertson, who finished first on the Kentucky B.A.S.S. Nation team, started strong on Day 1 with a fourth-place limit of 19-14. He followed with 17-8 on Day 2 and reached Friday’s Championship round in third place. Adding 22-8 on Day 3 allowed him to surge ahead with a winning margin of 3-1.

“The last few days, I caught quantity and not quality,” Robertson said. “Today, I only caught about 15 fish. But when my second fish was a 5-pounder, my gut told me it was going to happen.”

Committing all three days to the south end of Lake Okeechobee, Robertson said he stayed in a 600-yard area the entire time. This area had a mix of pencil reeds, flat reeds, Kissimmee grass and hyacinth â€” and with very little company, he was able to cover water at his leisure and hunt for aggressive prespawn bass.

With practice delivering a few giant bites, Robertson said he felt confident he was around the right caliber of fish. His hope was that these fish would become more available once the weather stabilized in the wake of a cold front that passed through prior to the event.

“I knew those big ones would move in, so I stayed in there all day,” Robertson said. “I had it all to myself. One other boat came in each afternoon for about 20 minutes.

“I’m a run-and-gun guy, but I dropped the trolling motor. The first day I caught 60 fish, the second day I caught about 40. Today, I caught (fewer) but they got bigger. I think those big females were moving in to spawn.”

Robertson caught a lot of his fish on a Gambler EZ Swimmer Swimbait. He also did some damage on the Strike King 4.75 Rage Swimmer in ayu rigged on a 5/0 swimbait hook and a 1/8-ounce bullet weight. A burning retrieve produced best.

“I didn’t try to get dialed in on one thing, I fished it all,” he said. “I just went up and down stuff and, man, I got the bites. My biggest one was about 6 pounds.”

Essential to Robertson’s presentation was 65-pound Strike King Tour Grade braided line. He said he would have preferred to use fluorocarbon, but he didn’t want to risk a heartbreak amid the heavy Florida vegetation.

Bryan Gunter of Ninety Six, S.C., looked like an unstoppable force the first two days, but he saw his bite dwindle in the Championship round. Sacking up a 20-pound Day 1 bag put Gunter in third place, and adding 23-8 on Day 2 gave him the lead going into the championship round.

His final effort turned up 13-5 and Gunter slipped to second with a three-day total of 56-13.

David Gorman of Canton, Ga., finished in third place with 56-7. Mounting the event’s biggest comeback, Gorman placed 51st on Day 1 after catching 10-3 limit. He roared back the following day with the tournament’s third-heaviest catch â€” 23-5 â€” and rose to 10th. Adding 22-15 on the final day pushed Gorman to a third-place finish with 56-7.

“I was fishing needle grass and arrowheads in 1 1/2 feet of water and burning a Gambler Big EZ swimbait in the copper field color on a 6/0 screw lock hook with a 1/4-ounce weight,” Gorman said. “In practice, it was all bucks (male bass) and in the tournament, the big mamas started coming in.”

Jim Topmiller of Orlando, Fla., won the nonboater division with 36-2. Topmiller took the lead on Day 1 with 14-10, held his position the next day by adding 9-1 and closed the door in the final round with a limit of 12-1.

“Today was tough; I didn’t have my two big ones until about 1 o’clock, and they came pretty near one another on a Berkley Grass Pig swimbait rigged on a 4/0 VMC swimbait hook with a 1/8-ounce (weighted shank),” Topmiller said. “I caught the earlier ones on a Berkley Burner Worm rigged on a 5/0 hook with a 3/16-ounce bullet weight, pegged.”

Mike Caul won the Big Bass competition among nonboaters with a 9-8 largemouth.