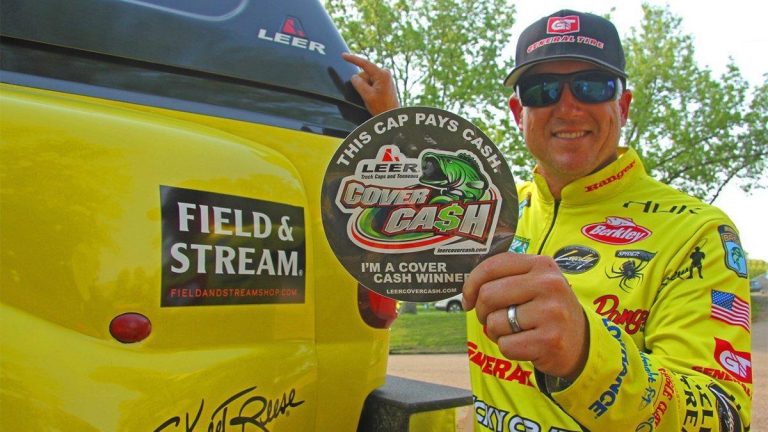 No pro angler drives a bigger truck than Skeet Reese, and very few rigs stay gone from home as long as his during the course of a Bassmaster Elite Series season.

“I packed this truck in January at my home in Northern California. It hit the road for the first Bassmaster Elite Series event in Alabama back in February, and it won’t be back to California until October when the season is over,” says the former Bassmaster Classic Champion and Toyota Bassmaster Angler of the Year.

The truck is a massive Ford F650 with fuel tanks that hold 200 gallons of diesel. The fiberglass cap on the back of it is a LEER, and it stores virtually every piece of fishing tackle the legendary pro owns in a safe and dry manner, along with the golf clubs that support his other passion.

Among the fishing tackle stored under his LEER are several 7” swimbaits and the Lucky Craft SKT Magnum squarebills he used at Kentucky Lake to narrowly miss winning his highly impressive 9th career B.A.S.S tournament.

Second place stings a bit, but it was still good enough to haul home the LEER “Cover Cash” bonus to California. And when asked what he’d spend the bonus money on, Reese replied in classic California native fashion, “Maybe a bottle of wine or two.”

You don’t have to be one of the world’s top pros like Skeet Reese to win “Cover Cash” bonuses from LEER. You simply have to be the highest eligible finisher in your qualified event. To learn the specific details, check out LeerCoverCash.com, or simply call Kendell or Gretchen at (918) 742-6424, and they’ll be happy to make sure you get signed-up.