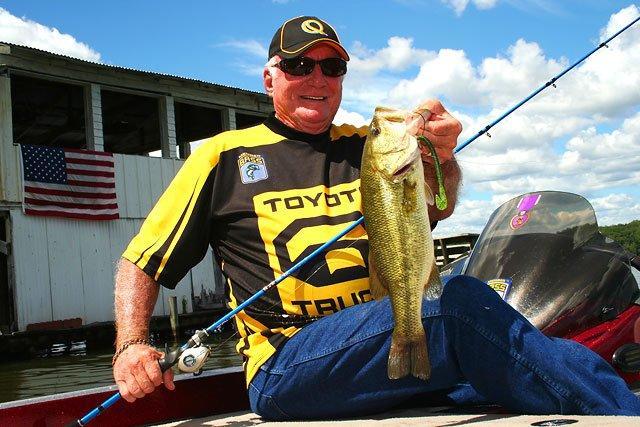 VanDam knows him well. So does 29-time Bassmaster Classic qualifier, Gary Klein. He’s sort of like a long lost Uncle to Gerald Swindle, and he once guided Dean Rojas to shelter from a brutal weather storm.

Many Bassmaster Elite Series anglers know the now fully retired Harry Potts. Some call him â€œDirty Harry.â€ I call him â€œUncle Harryâ€ — because it feels right, not because I’m genetically connected to him. And like good uncles do â€“ he took me fishing recently.

For five seasons, and a combined 125,000 miles, Harry Potts used a Toyota Tundra to help pull B.A.S.S.’ s corporate sponsor boats all across America along the Bassmaster Elite Series trail. Three decades before that, he was pulling shrapnel from his head, hip and legs in Vietnam.

I’ve been in a bunch of bass boats. But I’ve never been in one with a decal like the one I saw on Harry’s windshield. So I asked, and he explained — only because I asked.

His reluctancy to explain the decal is not due to a lack of pride. Bass fishing simply makes for better memories and conversation than war. Of course, war will never leave his soul. Not at age 70. Never. Not even on a gorgeous, happy day on one of his favorite Alabama reservoirs.

But the memories come easy around Veterans Day. Potts entered the active Army in 1960 as a private and retired in 1981 with the rank of Major.

â€œI served in Vietnam from August of 1967 to August of 1968,” Potts said. “My unit was the 4th Military Police Company, 4th Infantry Division. I was involved in the Battle of Dak To, and took shrapnel in my legs during the Tet Offensive when a rocket propelled grenade hit our Jeep.

â€œUpon my return to the United States, I was dropped off in front of the San Francisco Airport Terminal. My welcoming group was a bunch of hippies who threw rotten eggs, fruit and water at me and three of my fellow servicemen. They called us baby killers and war mongers â€“ that was our thanks.”

Then he was sent back for more.

â€œI returned to Vietnam in August of 1970. I was only there 21 days when I was wounded in the head by mortar round fragments while trying to save a soldier with half his leg blown off. I made it through that year as a Company Commander, but the elements of that second tour were far tougher than my first. In addition to battling the enemy, we were fighting horrible internal battles with drugs, racism and the fear of being left behind, or the last one to die.”

You’d like Harry Potts. He’s been a B.A.S.S member since 1986. He’s the perfect blend of serious and practical joker. Just ask VanDam. Kevin has been the target of more than one of Harry’s pranks. And the old cat can catch â€˜em too. Potts bagged two bass boats and a bucket of cash while fishing the Elites as back-decker.

But again, his service to America will never leave his shrapnel intruded soul. Nor should it.

â€œI am so proud of the way present society embraces our soldiers. It makes me feel really good. Finally, we are properly recognizing the folks that protect our American ways and freedom. I hope that on Veteran’s Day you’ll shake a Veteran’s hand, or active duty soldier’s hand, and tell them thank you.â€

What an incredibly simple, humble request.

At day’s end, through my lens, was everything that was good about America — holding a  rod and reel  in his right hand, a 3-pounder in his left — and a Purple Heart sticker displayed proudly on the windshield.