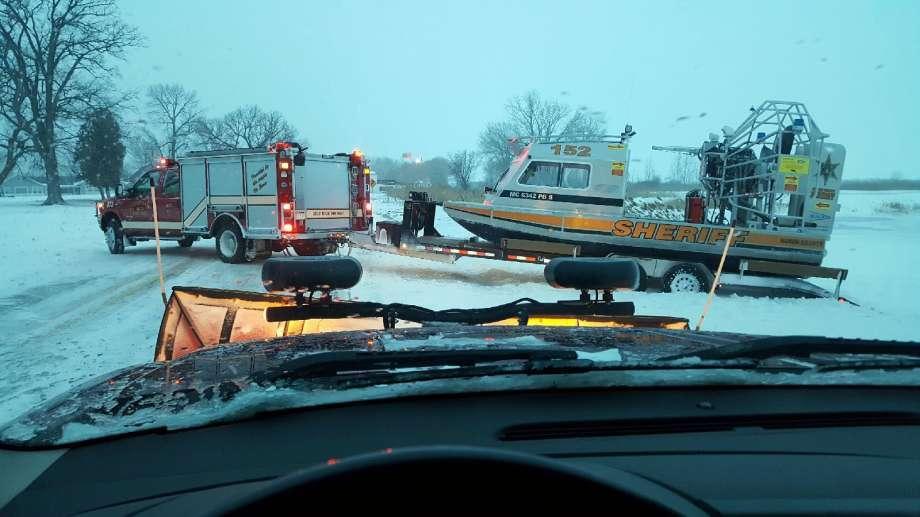 This week has seen two separate incidents involving ice fishing rescues and fatalities on the unsafe and unpredictable ice on the Saginaw Bay of Lake Huron. Monday, Feb 5, 2018, authorities from the Huron/Tuscola joint airboat team and the Caseville fire department responded to a 911 call placed at approximately 7 p.m. The woman stated her son had been out ice fishing and was returning when he drove his ATV into open water. He managed to get out of the water but was unable to make it to the shore 5 miles out so he sought shelter in the shanty he was pulling.

According to the statement from the Tuscola County Sherriff’s office Facebook page:

“Sgt. Nitz and Deputy Dutcher, who are part of the joint Huron/Tuscola Airboat team responded. Caseville Fire Chief Ben Willenberg and other members of their fire department transported the airboat to the scene and assisted also.

Using the airboat, thermal imaging and GPS co-ordinates they located the fisherman and transported to shore. He was treated at the scene by ACW ambulance.”

This comes just a day after two men, Dennis W. Shaw, 73, of Fowlerville, and Willard E. Slider, 69, of Caro also fell through the ice on Saginaw Bay. Both men perished in the accident as they were unable to get out of the water.

According to the Huron County Sheriff’s Office release:

Two ice fishermen lost their lives Sunday when they fell into the water off the Rose Island area of Saginaw Bay. Huron County Sheriff Kelly Hanson said officers were called out about 2:30 Sunday afternoon to Fairhaven Township on the report of the ice fishermen missing. A friend of one of the victims had received a voicemail from the victim saying he and another man had broken through the ice and needed help.

Using the airboat deputies were able to locate an ATV and fish shanty in the water about a half mile west of Rose Island. Water was 4 feet deep, and two Tuscola County deputies on board went into the water in cold water gear in search of the victims, while Huron County Sheriffs divers were on the way. They didn’t initially find anything, and the search continued.

About 4:30 the officers found the victim’s about 900 feet northeast of the original scene. Preliminary investigation indicates the incident may have actually occurred about 9:30 in the morning. The victim called the friend and left the voice mail which wasn’t found until the afternoon. Notification of the next of kin began after the victims were identified.

Sheriff Hanson noted that with repeated warnings over the past couple of weeks about unsafe ice being issued, he was once again reminding anglers that ice conditions are very unpredictable and to not take the ice for granted just because colder temperatures are back.