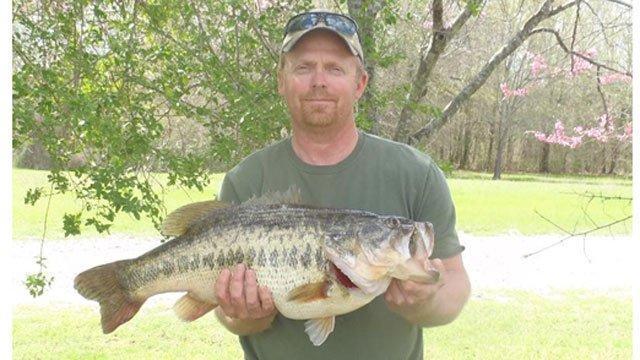 A new Oklahoma state record largemouth bass was caught Friday, March 23, at Cedar Lake in southeast Oklahoma. The fish weighed 14 lbs. 12.3 oz. and was caught by Poteau angler Benny Williams, Jr. while on a camping trip at the 78-acre LeFlore Co. lake.

“Catching the state record largemouth bass in Oklahoma is a big deal and catching a fish this large is a big deal,” said Barry Bolton, chief of fisheries for the Oklahoma Department of Wildlife Conservation. “It speaks to the quality of fishing we have in Oklahoma and also to the anglers who get out there and fish for them. We congratulate him on his great catch.”

The last two state record largemouth bass as well as several from the state’s Top 20 Largemouth Bass List have been caught in the southern and southeast regions of the state. Fish are cold-blooded, so their metabolisms work faster in warmer conditions and they grow more rapidly. Lakes in the southeast region of the state tend to warm up earlier and cool off later in the year than in other regions, which affords these fish a longer growing season.

According to Gene Gilliland, assistant chief of fisheries for the Wildlife Department, Cedar Lake has been known to produce big largemouth bass for anglers in recent years – not only because of its southeastern location, but also because it has a history of receiving Florida strain largemouth bass through the state’s stocking program.

“They grow pretty fast down in that part of the state,” Gilliland said. “Cedar Lake has produced several double-digit fish in the last five years.”

Anglers who believe they may have hooked a record fish must weigh the fish on an Oklahoma State Department of Agriculture certified scale, and a Wildlife Department employee must verify the weight. For a complete list of record fish and the procedures for certifying a state record, consult the current “Oklahoma Fishing Guide” or log on to wildlifedepartment.com.