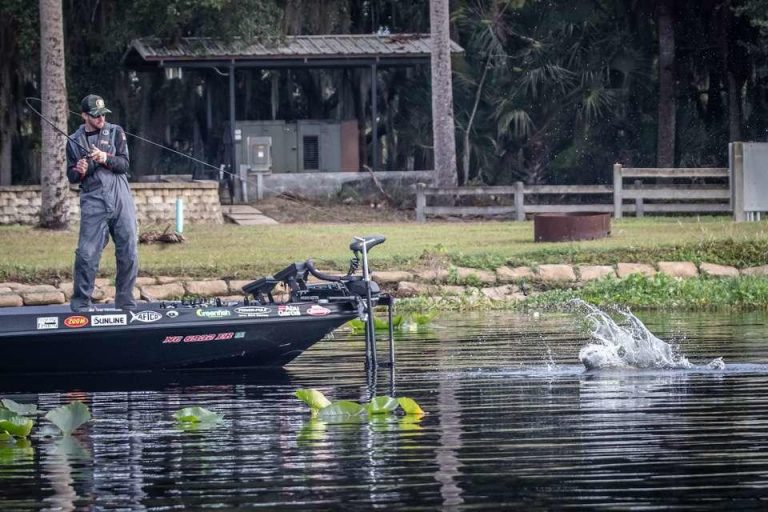 Bryan New launched his rookie season in blockbuster form by topping a stout field of well-established finalists and winning the AFTCO Bassmaster Elite at St. Johns River with a four-day total of 79 pounds, 7 ounces.

New caught most of his fish out of lily pads, but he found a few keepers over main-river shell bars about halfway between Palatka and Dunn’s Creek, which connects to Crescent Lake. Targeting bars in about 5 to 7 feet, he fished a Berkley Warpig lipless crankbait in the bleeding shiner color with a slow yo-yoing technique.

“That wasn’t a winning-fish deal, but without those fish, I don’t win this tournament,” New said.

The pads that produced the bulk of his weight were located at the lower end of Lake George. Fishing 5-inch black and blue Zoom Zlinky worms Texas-rigged on a 5/0 Berkley Fusion hook with a 1/8- and 1/4-ounce weights, New said he focused on isolated pads.

“I fished dense pads too, but I definitely liked the sparse pads for multiple reasons,” he said. “First, on an isolated target, it’s easier to pick out where the fish are sitting and they have more light penetration. That’s important for the spawning fish I was targeting.”

The key, New said, was a meticulous presentation that maximized every aspect of his target area.

“I’ve always heard that slow and steady wins the race,” New said. “That’s not always my style, but I can do it.”

New caught good numbers the first three days. Day 1, which was shortened by a three-hour fog delay, yielded 12 pounds and put him in 22nd place. The second day, he added 20-3 and rose to ninth before securing his Championship Sunday berth with a Day 3 limit of 21 pounds, which pushed him up to sixth.

Following the Day 3 weigh-in, New said he’d approach Championship Sunday focused on getting the big bites. On Sunday, he caught four in the 5-pound class and another over 4.

New qualified for the Elites by winning the Falcon Rods Bassmaster Opens Angler of the Year title, an accomplishment that began with a win at his first 2020 tournament – the Basspro.com Bassmaster Eastern Open on Florida’s Kissimmee Chain.

Before the St. Johns event began, New stated that his 2021 goals included winning Bassmaster Angler of the Year – not only Rookie of the Year – and winning the Academy Sports + Outdoors Bassmaster Classic presented by Huk, which is set for June 11-13 on Lake Ray Roberts.

New summarized his Elite debut: “I have a pretty good start!”

Hackney committed his tournament to fishing cypress trees on Lake George’s east side. He caught 12-7 on Day 1 and placed 19th and then rose to third on Day 2 by adding 22-10. He’d improve to second on Day 3 and held that final position with weights of 23-6 and 11-7.

Returning to the Elites after a two-year break, the Gonzales, La., pro caught all of his fish on a junebug-colored Strike King Rage Bug rigged on a 5/0 Hack Attack Flipping hook with a 1/4-ounce Tour Grade Tungsten weight.

“There’s not any cover left in the lake (2017’s Hurricane Irma killed the eelgrass) and this was one of the few areas that had enough depth and enough protection from the elements for those lake fish to spawn on.

“There’s only a handful of docks and cypress trees in the lake and I spent one whole day in practice fishing all the way around (Lake George). I knew this was the area of the lake where the biggest population of fish lived and I knew where they used to spawn. I just looked for anything that was close by.” 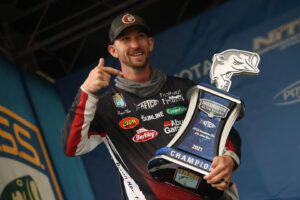