Megabass is announcing their new lineup of baits prior to ICAST this week, and we have our exclusive underwater footage of all their baits in action once again.

Here is a lengthy rundown of their new fishing tackle offerings for 2017 and early 2018 from their press releases (fish catch footage courtesy of Oliver Ngy and Big Bass Dreams):

The secret behind GARUDA’s overwhelming ability to attract fish and elicit bites rests in its powerful movement, painstaking detail, and the quality of its sound. Double-jointed construction and careful design drive smooth, sinuous action punctuated by the enticing “knock” of GARUDA’s joints coming in contact.

A wide, powerful lip stiff-arms gnarly timber and submerged structure, allowing GARUDA to be deployed where other big baits often foul. With rod tip held high and a slow retrieve, GARUDA is a monster wake bait ready to challenge the biggest fish in your waters. Drop your tip and speed up your retrieve, and GARUDA will dive 4 to 6 feet with a  hard-charging action and huge deflections bass just can’t ignore.

Spec’d as a floating lure, GARUDA is also designed to accept teardrop sinkers behind the lip, to be deployed at virtually any depth range. For fishing that involves bottom contact, GARUDA can be “back hook tuned” by removing the trebles, and attaching a single hook to the top of the lure. The back of the lure, where the groove for hook shank is located, features a neodymium magnet MAGHOLD (PAT.) system to keep the top hook in place.

The GARUDA’s overwhelming destructive power is perfect for top range dead sticking and waking, mid-range retrieves, bottom contact, and anything a monster hunter could possibly desire from a big bait. GARUDA is built to bring you results beyond your imagination.

For targets sensitive to noise, we have included elastomer pads for silent tuning to soften the contact sound of the joints. 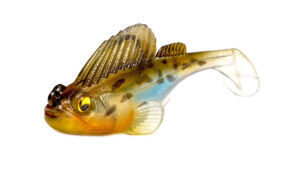 The Dark Sleeper swimbait was developed to target fish holding to bottom structure, with overwhelming realism and enticing paddle-tail action.

With a soft fin that shields the top hook on both sides, Dark Sleeper is designed for stealthy, life-like deployment as a bottom-bouncing swimbait. In addition to camouflaging the top hook design, the fins also gently deflect potential snags, allowing Dark Sleeper to crawl through gnarly structure. Soft fin material compresses instantly for sure hooksets, collapsing out of the way to drive the hook point.

A low center of gravity weight setting and bottom fins keep Dark Sleeper upright as it moves through structure, for a naturally appealing approach. 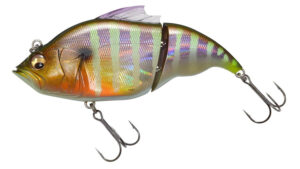 The VATALION vibration / glidebait is tuned for all speeds, and is designed stop on a dime and slide out to the left or right when the retrieve is suddenly paused. With a slow retrieve, VATALION exhibits sharp, quick turns for pinpoint targeting of channels through grass beds, submerged weeds, and alongside structure. With fast retrieves, it tightens up and delivers a hard-hitting, high-pitch rolling action akin to the Vibration-X Ultra, luring bites from distance.

The VATALION is not a traditional glide-bait, to be worked with rod actionâ€”instead, it has proven incredibly effective with a stop and go retrieve, with speed adjusted to conditions. The irregular inertia-powered slides that occur the moment retrieval is stopped are the VATALION’s secret weapon, eliciting crushing bites. 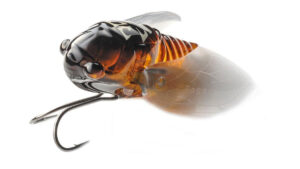 The Grand Siglett is a crawling topwater cicada plug that approaches the essence of bug-pattern fishing. Specially designed wings hold tightly to the body for aerodynamic casts, and open with the first tug on the line.

With wings open wide to the left and right, Grand Siglett  will crawl with a lifelike splashing/bubbling action at slow and medium retrieve speeds. With subtle twitches, Grand Siglett  will pulse in place, perfect for pinpoint targeting of inviting overhangs and pockets of still water. With short, strong pulls, Grand Siglett erupts into a furious burst of commotion, drawing attention to the life-like details that lull wary feeders into striking.

Hard-plastic exoskeleton doubles as a rattle-chamber, generating a frequency which is precision-tuned to mimic the cicada’s fading cry.

The Grand Siglett is equipped with a double hook. It will allow you to reach the farthest recesses of enticing overhangs. In dense cover, set the hook upward, to keep hook points alongside the body and out of the way. When targeting open water or short-bite situations, set the hook points so they face away from the body. 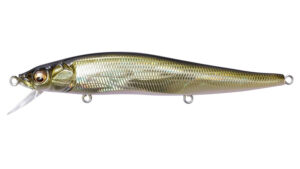 The Oneten Silent brings deadly stealth to the undeniable performance of the Vision Oneten jerkbait, unleashing a new weapon upon tournament waters. By consolidating the moving balancers of the original ONETEN into a single, fixed weight, the Oneten Silent is poised to strike from any position. In fact, by eliminating the dead space between tungsten spheres, the weight is more compact, and more precisely placed. This not only preserves the storied action, suspend-setting and head-down posture of the original Onetenâ€”it perfects it.

When jerked, the Oneten Silent s acrobatic darting-escape action and intense flashing tempt large bass across a wide area. When the Oneten comes to a rest, it does so with a tantalizing, life-like quiver, almost as if the bait itself were trembling in anticipation. The Oneten Silent will capture the attention of wary targets, eliciting key bites in even the harshest conditions. Tuned by STW, the Oneten Silent has been perfected for North American waters, placing a deadly new weapon in the hands of serious jerkbait anglers everywhere. 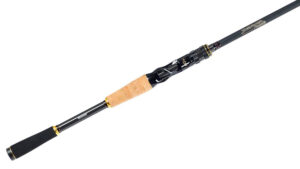 First released in Japan in 1996, the Destroyer ® rod series ushered in an era of unrivaled performance, innovation, and craftsmanship that reverberated throughout the angling world. Built to Japanese angling specifications, each generation of Destroyer ® represented an evolution in Megabass ® rod design, allowing anglers across Japan to realize ever-greater potential with every cast.

Harnessing this design evolution, the all-new Destroyer ® is crafted exclusively for North American anglers. Each model is a careful refinement of key American techniques, tirelessly honed by the insight our designers have gained though thirty-years of innovation across virtually every lure type and category.

Each un-sanded blank features the original Destroyer ® logo as a nod to its predecessors, and is constructed of a proprietary Hybrid Graphite System. This system integrates carbon of varying modulus into a single blank, selecting the optimal grade for each bend point for a “Hybrid” construction that is effortlessly suited to the task at hand. Combined with our multi-axis build process, each blank stands in its prime, poised to unleash bombing casts and devastating hooksets, while also revealing a deep wellspring of “lifting power” to control the fight.

Armed with the best available materials and components, patented advancements, proprietary blank builds and tapers, and that impeccable fit and finish anglers have come to expect from Megabass, these first eight models represent the opening salvo in North America’s own Destroyer ® journey. Choose your weapons wisely.