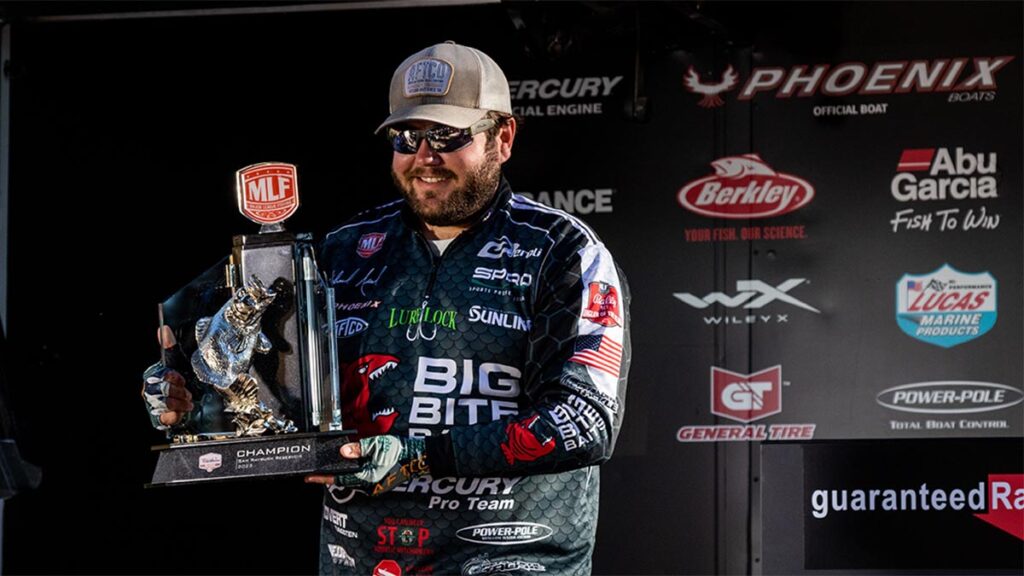 Continuing to roll his momentum from one year to the next, reigning 2021 Tackle Warehouse Pro Circuit Angler of the Year (AOY) Michael Neal of Dayton, Tennessee brought a five-bass-limit to the scale Sunday weighing 26 pounds, 5 ounces to win the MLF Tackle Warehouse Pro Circuit Presented by Fuel Me Guaranteed Rate Stop 1 at Sam Rayburn Reservoir Presented by Ark Fishing. With weights zeroed on the final day, Neal’s limit of 26-5 earned him the win by a whopping 8-pound, 3-ounce margin over pro Josh Bragg of Jacksonville, Alabama and the top prize of $100,000.

With back-to-back major career wins across two pro trails, Neal is quickly becoming a dominant force in the sport of bass fishing, finishing the 2021 season with a win at the MLF Bass Pro Tour Carparts.com Stage Seven at Lake St. Clair Presented by Covercraft and taking the 2021 Tackle Warehouse Pro Circuit AOY title, before cruising to his most recent win on Sam Rayburn Reservoir.

“It’s exciting to just pick up right where I left off last year,” said Neal. “I don’t know how long this streak will continue but it’s been a great two years so far.

“I think the reason my fishing has picked up so much last year and this year is just the amount of time I’m spending on the water,” continued Neal. “Fishing both the Pro Circuit and the Bass Pro Tour, I fished more than 20 tournaments last year and I’m looking at about the same number of events this year as well. You’ve got to be versatile, and I definitely struggled with that early on in my career, wanting to fish with big rods and big line all the time, but I’m learning to let the fish tell me what they’re going to do and to not try to force things.”

With an 8-pound, 9-ounce kicker to start the final day, Neal seemed to be more than happy following what the fish wanted to do.

“That fish really whipped me,” said Neal. “It took a long time to get it in the boat – it seemed like 10 minutes. I was trying to stay where I was to keep fishing that spot, but once that fish came up and I saw how big it was, I decided to go chase it down.

“It’s been a great week and it’s taken a long time to get to this point, but momentum is everything. We’ve spent a lot of time on this stage coming in second and third, but I finally got the monkey off my back in the Pro Circuit and that feels really good.

Neal said on Day 1 he caught pretty much everything on a spinning rod and a drop-shot, fishing out deeper at 20 to 22 feet, but his strategy changed as the tournament progressed.

“They seemed to pull up a little bit on Day 3, up in that 8- to 12-foot range,” said Neal. “I caught one on a Big Bite Baits Suicide Shad Swimbait, another one on a SPRO John Crews Little John MD 50 Crankbait and a couple others on a jerkbait. I caught all of my fish on a jerkbait today.”

Neal said he found a lot of his fish during the tournament, just trolling around looking at his Lowrance ActiveTarget Sonar.

“I’m really looking forward to the start of the Bass Pro Tour,” said Neal. “I want to see if we can keep this momentum going for the whole 2022 season.”