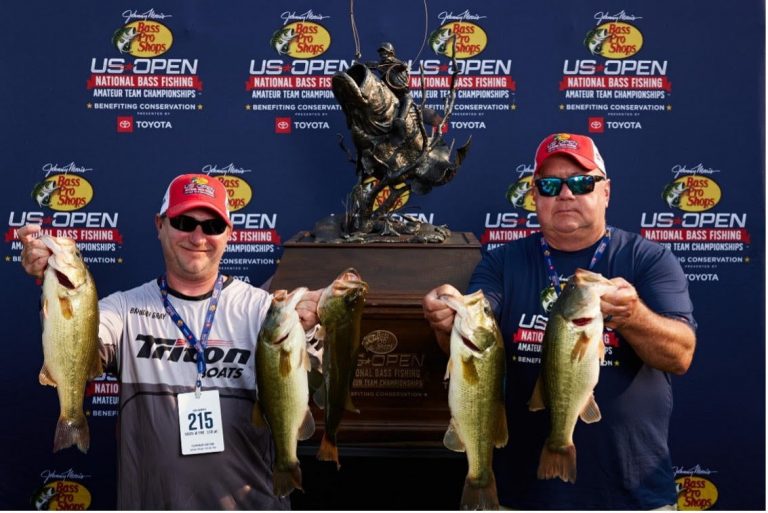 Gray from Bullock, N.C., and Kingree from Henderson, N.C., fished from a Triton boat and hauled in a five-fish catch weighing in at 16.21 pounds to top the 250-team field. They collect a first-place prize of $50,000 and are one of 40 teams to qualify for the National Championship on Nov. 19-21 at Big Cedar Lodge on Missouri’s famed Table Rock Lake. The National Championship will be broadcast internationally on NBC and carries a $1 million cash prize to the winning team.

“Thank you to everyone at Bass Pro Shops for putting this together,” said first-place winner Brandon Gray after winning the first-place $50,000 prize. “This event is all about conservation, and I think with the amount of participation we have seen here today, we were able to do some unbelievable work for conservation.

The top 40 teams received a payout and qualified for the National Championship. Additional prizes were awarded for catching the biggest bass within the following categories:â€¨
Biggest Bass: The biggest bass (5.76 pounds) was caught by fishing buddies Stacy Benningfield and Charlie Mattingly from Lebanon, Ky. Benningfield and Mattingly earned $5,760 for the catch ($1,000 per pound), will receive a replica mount of the bass with a duplicate going on display at Bass Pro Shops in Nashville, Tenn., and was entered into a drawing for a Nitro Z20 boat.

Patriotic tributes in remembrance of 9/11

As the US Open qualifying event took place on the 20th anniversary of September 11, 2021, the weekend was filled with patriotic tributes to honor the men and women whose lives were changed by the tragic events of that day.

On the evening prior to the tournament, Bass Pro Shops founder and noted conservationist Johnny Morris held a special remembrance ceremony for the anglers and invited veterans. In partnership with Helping a Hero, Morris surprised the families of two wounded veterans with new specially adapted homes through the organization’s Wounded Hero Home Program. Helping A Hero’s National Ambassador and “God Bless the USA” singer Lee Greenwood also made a surprise performance with special guest Tony Orlando for attendees and their families.

During the tournament, the Remembering Our Fallen photographic war memorial was on display, as part of a nationwide tour organized by not-for-profit Patriotic Productions. The memorial honors our military members who made the ultimate sacrifice in the line of duty post-Sept. 11, preserving the images and stories of these American heroes on 34 individual Tribute Towers.

Benefiting the Future of Fishing

The Old Hickory Lake qualifying event benefits conservation with proceeds supporting The National Fish Habitat Partnership. Thanks to Bass Pro Shops and Toyota, 100 percent of all entry fees – over $1 million throughout the tournament – will fund critical fisheries conservation and habitat projects nationwide.

In keeping with its longstanding commitment to conservation, Johnny Morris and Bass Pro Shops partnered with the Tennessee Wildlife Resources Agency to help ensure all fish caught during the Bass Pro Shops US Open regional qualifying event on Old Hickory Lake were released responsibly following a fish-friendly weigh-in.

To learn more about the Bass Pro Shops US Open and how to register for the final qualifying event at Bull Shoals Lake, visit basspro.com/usopen.