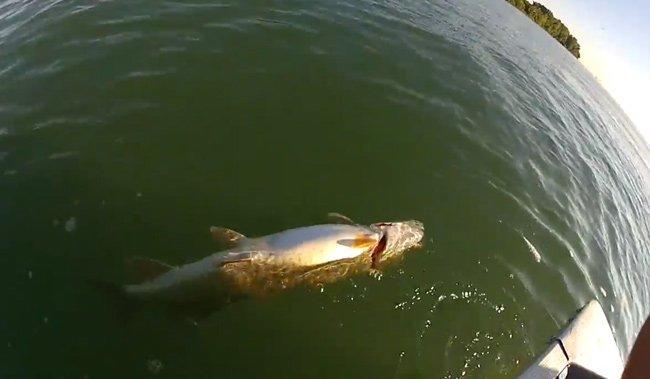 They call musky the “fish of a thousand casts” largely because they are not very common in most fisheries and very difficult to catch. They are a favored fish of trophy hunters in the northern part of the US as well as Canada.

This week a round of stories has made their way across our desks that was somewhat sickening as well as rewarding. On Sept. 3, 2014, a pair of anglers witnessed another angler on the Detroit River near the mouth of Lake St. Clair catch, unhook and then bludgeon a musky to death before discarding it back into the water. Upon seeing this action, Mike Cowley and Dane Alexander raced over to verify if it was a musky and then to confront the angler, all on video.

The debate got heated and laced with expletives as they tried to explain to the other angler about “wanton waste” laws. His belligerent attitude towards the fish sparked off an internet lynch mob seeking justice for musky anglers everywhere.

Turns out it worked. The angler was found and has since given an apology for his actions, also on video. It still remains to be seen what punishment if any the Canadian Ministry of Natural Resources doles out after its investigation of the incident.

For more details on the initial incident and to watch the video, visit this link to Windsor Star. And to see the accused anglers apology, click here. Kudos to the anglers for helping police a fishery they are passionate about.