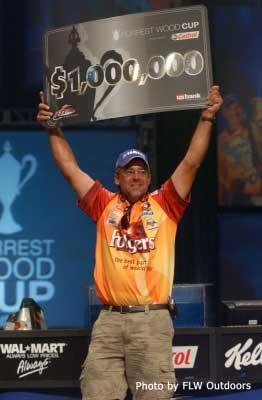 Scott Suggs, FLW’s million dollar man, may have hoisted an oversized novelty check on a stage in Hot Springs last summer amidst fireworks and applause, but there was no such drama when the money found its way to his bank account.

“It looked just like a regular check and my wife carried it to the bank the next morning,” he said. “It was kind of odd. We expected some sort of reaction from them like ‘This can’t be real,’ but all they said is that ‘We’re expecting you,’ and that was it.”

So it goes for the understated Arkansan who won the biggest single prize in bass fishing history, close to home, out of his own boat. Newfangled tactics like swimbaits and a dropshot weren’t critical to his success – the key tool was the venerable plastic worm. He didn’t “Go Ike” and he certainly didn’t breakdance, and now, almost a year later, he’s just Scott, and he’s fishing like it’s still 2006 and he hasn’t done the unthinkable.

Go to his house in Arkansas and there’s no line of blinged out Hummers, no private plane and no phalanx of armed security guards. Sure, he bought his two kids a swimming pool, but that was it. In fact, of the two of them, his wife is the more practical one, an accountant by trade who suggested they bring in another accountant as a safety net to make sure that they could maximize the value of their investments.

Where’s the drama? No long lost family members or ne’er do wells from long ago came out of the woodwork, either. In fact, the only unwanted attention he’s received has been a long line of financial advisors wanting to tell him what to do with his money. Scott, give us something, anything, a tidbit of news that shows your wild and crazy side.

“I invested a quarter of the money in retirement funds. If I live to be 59, I will be well off. The rest of it went to college funds, the kids’ funds.”

Do his peers treat him differently? Word around town is that some of his old buddies say the three S’s that form his initials should be transformed into dollar signs, but he’s got no Deion Sanders, Randy Moss or Joe Willie Namath in him, no need to self-promote beyond the needs of his sponsors.

“I’m not going to lie. I get a lot more respect (on tour), but I pretty much mind my own business. I’ve never had any confrontations on the water and there’s no reason for me to change as a person,” he said.

He’s still convinced that his victory was at least partially the result of luck: “Luck is a lot of it, those little surprises during a tournament,” he said. “I won a million dollars last year because I got a few breaks, things going my way. Then at the FLW Series at the beginning of this year on Okeechobee I was going to weigh in and a three pounder jumped out of my bag, hit the dock and went back into the lake. That cost me 50 or 60 spots in the final standings. I went from one complete extreme to the other.”