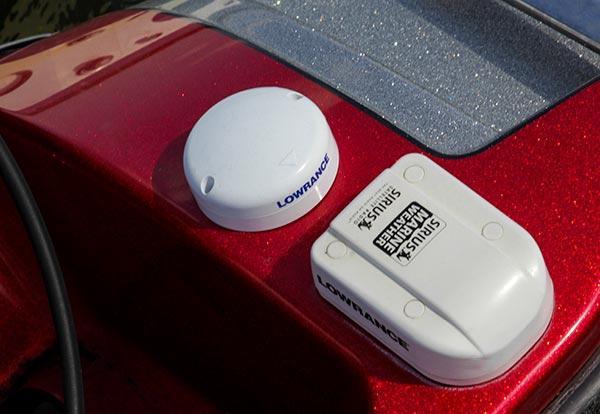 Buoys. Spot markers as I call them. Yes they mark your fishing spot for you when you canâ€™t see what youâ€™re throwing at under the water, but they also give those nice drive-by anglers a great line-up on the school of offshore bass or brush pile youâ€™re fishing too. I try not to throw buoys if I can help it for this reason. Until I got the Lowrance Point-1 Antenna, however, this was cumbersome at best.

The Point-1 Antenna is the new GPS receiver from Lowrance. Sure the newest units have GPS receivers in them. And you can purchase LGC 2000, 3000 and 4000 GPS receivers. But several factors make the Point-1 truly unique in lining up your spots, fish, cover and more from the driverâ€™s seat or the bow of your fishing boat respectively.

Catch up with the rest of your electronics

Electronics have advanced so much in the last decade in terms of finding great fishing spots away from the bank, not to mention schools of the fish themselves. Now you can actually see individual fish, how they are grouped and often tell the species by the amazing detail you have now on your fish finders with things like Structure Scan and Side Imaging.

GPS technology hasnâ€™t changed much in the last decade though, and I personally have been waiting for this product for a while. Finding great schools of fish still takes time and effort, but Iâ€™ve built up confidence with my Lowrance Structure Scan and know when I see bass or crappie on a brush pile, or a good looking piece of cover in just the right spot on some offshore structure. Thatâ€™s not the hard part anymore.

Whatâ€™s hard is staying on the spot when you find them in less than ideal conditions.

Eliminate the nuisance of lining up the spot

If the wind is blowing, if there is heavy current or sometimes when you have another angler in the back of the boat and donâ€™t want to â€œback boatâ€ them, you will find making the right cast on the spot difficult without some sort of visual aid. Sure you can triangulate with visual objects. But the further offshore you get, the harder that becomes.

Most guys when faced with this issue toss the buoy. A reference point for an angler to relocate on. But with current, big wind and waves that can literally spool a buoy cord, lift the buoy up and set it back down yards away from where it was dropped, this isnâ€™t the most ideal situation. And Iâ€™ll go ahead bet any guy that has fished offshore a lot has spent a little time getting his lure out of the buoy cord.

Point yourself in the right direction

Point-1 has a rate compass in it. Not to mention it gets 10 updates a second. Because of that double-the-speed update over the LGC 4000, and the ability to know when the bow of the boat is facing a certain direction, you can now point toward your waypoint and stay locked on to the right cast no matter what the wind does to you. If you drift off course, you can actually see the boat moving off still pointing in one direction while drifting in another.

Because of this I can fight a fish, land it, turn my bow back to the waypoint and get right back on the spot. Just like I had an imaginary buoy there.

I ran the Point-1 for several months and found myself wondering how I got by before. I installed the unit in like 10 minutes. I took the old LGC-4000 off, unhooked it from my NMEA system and drilled a couple of new holes so I could secure the new lower-profile “puck” style antenna. You have to be sure the arrow on the Point-1 is pointing forward. Go figure, right? But that’s essentially it after you plug it back into your NMEA backbone.

After that I waited to turn my units on until I actually got to the water because I had heard sometimes the units are unable to auto-calibrate and you have to manually calibrate on the water driving essentially in a circle at a specified speed until it figures out where the front of your boat is and how it needs to update given your location.

As luck would have it, the first time I turned my units on, they had already discovered the Point-1 on the network, calibrated it and were using it immediately.

It was crazy to see my boat and course extensions moving, or should I say facing, in different directions. As I turned, I could see the cursor arrow turn with me while the course extension (which is actually the unit extrapolating your heading based on its most recent GPS feedback) catching up so to speak.

When I stopped to fish an offshore spot on a windy day, I saw my boat facing one direction but my course extension coming out of the side of my boat. I really like that.

It takes a bit of time to understand distances on your GPS chart on your units. The easiest way I do this is to mark a piece of brush, turn and point at it and make casts until I connect with the piece of cover. Then I look at my graph and I get a distance to my lure from the rear of the boat (where the GPS receiver is located). And then I try not to zoom my bow unit in or out much from that. From this I learn when Iâ€™m a certain distance from a waypoint on my screen, Iâ€™m that same cast away from my waypoint the next time.

I plan to use this a lot this fall for fishing isolated crappie brush piles. Iâ€™ve used it a lot for ledge fishing for bass, and hitting underwater targets from a distance. Itâ€™s proven to be a huge time and hassle saver for me. Even something as simple as running the channels on a shallow lake like Barkley Lake seems easier because of the seemingly real-time updates.

The Lowrance Point-1 Antenna is what I believe is the missing piece in the perfect electronics setup with side and down scan, a good sonar and now instantaneous updates on GPS. The antenna is $199 at Tacklewarehouse.com. It installs easily if you have a NMEA system already installed. If not, you need to install one (which isnâ€™t terribly hard if youâ€™re wanting this antenna) if you want your fish finders to communicate with the new antenna. I highly recommend this for guys running Lowrance electronics and fishing away from the bank a lot in the summer months or fishing isolated brush piles for various species.

For more information on the Point-1 Antenna, read Lowrance’s FAQ on the new antenna here:  http://www.lowrance.com/Root/Lowrance-Documents/Point-1-FAQ-EN.pdf

Or look at the product highlights here:  http://www.lowrance.com/en-US/Products/NMEA-2000/Point-1-en-us.aspx