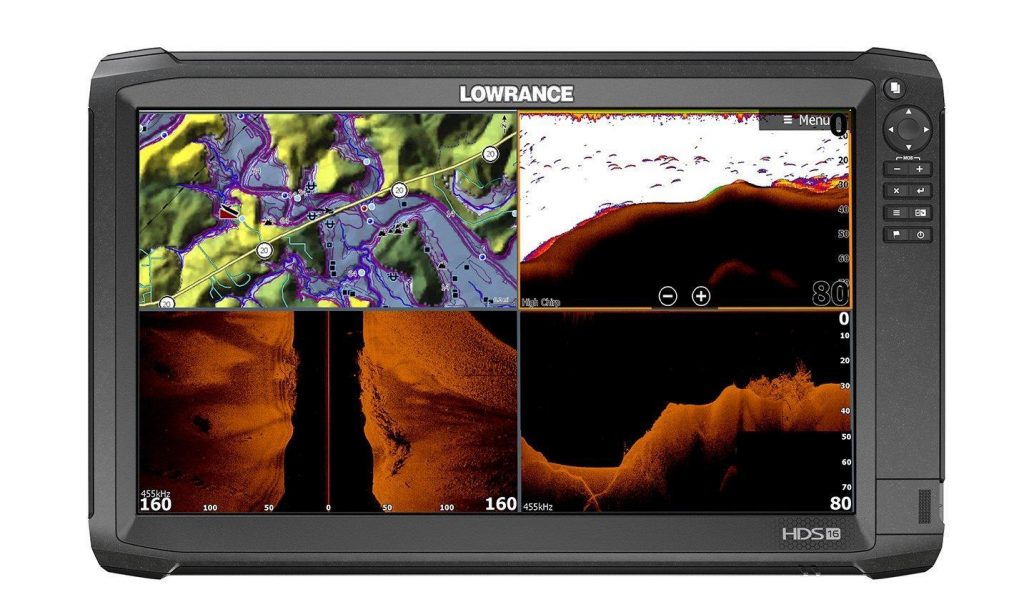 Lowrance announced the production of the HDS Carbon 16 high-performance fishifinder/chartplotter with the largest screen ever produced by the storied manufacturer. The new unit is due sometime in May 2017.

The massive 16-inch high-definition screen on HDS Carbon 16 displays provides an even bigger stage to showcase the clarity, high resolution and superior target separation of SolarMAXTM HD technology, exclusive to the HDS Carbon series. Setting up a four-panel split on the HDS Carbon 16 gives anglers the equivalent of four seven-inch screens on a single display.

Lowrance SolarMAX HD display technology features high-definition views and clear visibility in all conditions with the widest available range of viewing angles – even when wearing polarized sunglasses. The new displays feature 1920×1080 HD resolution and are engineered to withstand higher temperatures than conventional units, offering enhanced reliability in warmer climates. The secret behind the new SolarMAX HD displays come from the implementation of the most advanced IPS (in- plane switching) screens in fishing electronics. With superior color accuracy and boosted high-definition reproduction, IPS screens are perfectly designed for viewing picture-like sonar images. Whether viewing menu panels or onscreen fish targets, the improved clarity and sharpness of SolarMAX HD displays are clearly evident from any viewing angle.

“We are confident anglers are going to be excited about HDS Carbon 16, the biggest display ever produced in the 60-year history of Lowrance,” said Leif Ottosson, CEO, Navico. “Combining a 16-inch high definition display with our exclusive SolarMAX HD technology and the high-level performance of the HDS Carbon series will provide anglers with an on the water experience second to none. Anglers will not find a better combination of power and precision on the market.”

Protected by the Lowrance Service and Support program, the HDS Carbon 16 can be purchased from authorized Lowrance dealers and distributors for:

HDS Carbon 16 will be available in May, 2017. For more information on HDS Carbon displays, the HDS product family or the entire Lowrance line of marine electronics visit www.lowrance.com.