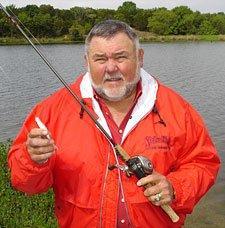 We were informed last night that Ray Murski, long-time salesman and eventual owner, then co-owner of Strike King Lure Company was killed in a two-car accident in Texas yesterday as he was traveling home from a hunting trip. Mr. Murski was 72 years old. His loss came as a sudden and saddened blow to fishing industry, namely those around the Strike King business.

Murski was there with Strike King from the very first days making the first sales calls on behalf of the company in 1966 to a small chain of stores, “Ben Franklin Five and Dime Stores” and “Walton Variety Stores” which would later go on to become Walmart. He was instrumental in getting the Strike King brand established as one of the top fishing manufacturers in the world through his sales. In 1995, he purchased Strike King from the original owner Charles Spence.

He also competed in the very first Bassmaster event, the All American on Beaver Lake, where he placed in the top five. Murski was always a good stick.

In 1997 and 1998, he took Strike King from a relatively small spinnerbait and jig company into a full product line company by introducing 400 new SKU’s in 1997 for the 1998 season and 400 more in 1998 and 1999 for the following seasons. It was at that time that the Strike King prostaff became integral in designing products for the company and really solidified them as one of the premiere brands in all of fishing.

He was a soldier in the Army having served during the Vietnam War and was stationed in Japan for a stint.

He was an amazing story teller and a man who never let political correctness impede his honesty about any situation. He was in a position many of us will never fully achieve, able to speak his mind openly without fear of consequence, and many of us in the industry always loved that about him. But he was still a very humble man, who was, by his own admission, bad with names but remembered everyone as “Buck,” a Texas endearment to friends when their name slips your mind for a second. To those at Strike King who worked with him and knew him on a personal level, he was the Alpha buck and their loss is great.

Please pray for his wife Mandy, his daughter Sara and his son Mike as they make their ways through the next weeks and months. Our hearts are broken for their loss and for ours.