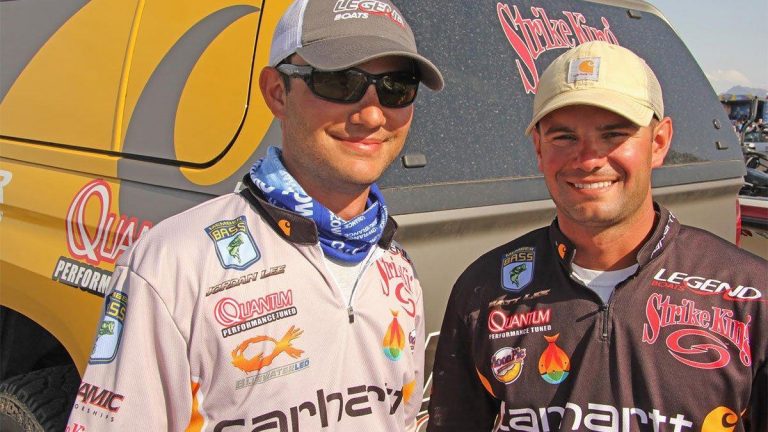 Everything was going great. Bassmaster Elite Series rookies Matt and Jordan Lee were holding their own a third of the way through the season in the Toyota Bassmaster Angler of the Year race. Heck, Jordan was even leading the Rookie of the Year race.

Now, Jordan and Matt sit inside room No. 300 at the Lake Havasu City Quality Inn eating an In-N-Out burger and licking their wounds. They just finished 99th and 101st respectively.

Lake Havasu, a gorgeous reservoir in the Mojave, taught the two recent Auburn University graduates the desert can burn you and leave you thirsty for confidence in your first year as a national touring bass pro on fishing’s toughest trail.

The Lee brothers are offspring of a hardworking, Carhartt-wearing veterinarian who once hauled wood chips to chicken farmers around Jones Chapel, Alabama to help pay his way through college. He pulls calves. They pull 21-foot Legend bass boats around America that are near mirror images of one another—much like the Lee brothers themselves. 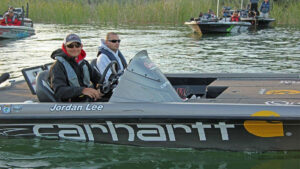 And everybody thinks they’ve got it made. Onlookers often tell them “it must be nice to go fishing for a living” – oh, but it ain’t what it appears.

A loaf of wheat bread, and a jar of creamy Jif sit on the dimly lit hotel room table to indicate the reality of this profession more accurately. These boys aren’t surviving on surf and turf.  They can’t afford it. With a grin, Matt humbly wears a mesh baseball hat made for him by a friend that says “Ballin’ on a Budget.”

As Matt eats his drive-thru window delicacy, and reflects on the fact that this one bad trip to the desert has placed Jordan in 30th and himself in 73rd position in the Angler of the Year Points race, he says, “we’re happy to be here, but it’s hard to really, really totally enjoy it—there’s no fun and games to this—it’s big time stressful.”

“We’re fishing 12 hours a day against guys we grew up idolizing. They’re the best in the world and they’ve been doing it for decades,” adds Jordan. “We knew this would be tough and we’re not saying that catching fish for a living isn’t fun, but when you don’t catch them, it stays in your mind a lot longer than the good days out here.”

In the morning, the Lee brothers will pack out of their shared hotel room in Lake Havasu City and point their Tundras 1,774 miles to the east toward the home they rent affordably at Lake Guntersville, AL. It’ll take about 27 hours, requiring at least one more night in a lonely hotel room along the way. 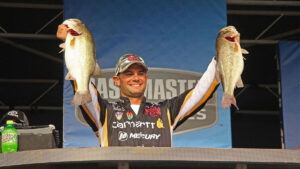 But the Lee Brothers have each other, and that’s more than most rookies and veterans can claim. Not only are they traveling companions, but also, they work together to keep the highs from being too high, and the lows from being too low. And they’re already game planning on how to find and catch fat green fish at the upcoming BassFest tournament on Kentucky Lake.

Humor helps too. So Matt purposely opens the bathroom door to interrupt Jordan’s privacy, and Jordan barks like brothers do at one another. These two are in their early 20s, but at the moment acting like 7th graders—t’s not immaturiy—it’s a way of keeping life light on an otherwise dark afternoon in their young careers.

“This sport is a game of ups and downs. We’ve got a long way to go and we’re gonna have good days and bad days—good years and bad years—but we’ve gotta stay level-headed and right now, just enjoy this burger,” concludes Matt.