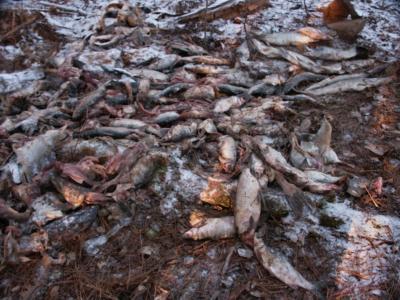 Local angler and guide Bob Auel brought a disturbing discovery to light this week on an internet chat board. Since then the story has hit the television media and now seems to be making the rounds on the internet.

Native American netters are believed to be behind the blatant wanton waste of large northern pikes and muskies that were caught in the nets meant to harvest walleyes on Leech Lake in Minnesota. The fish were discarded deep in the woods after being caught in nets.

Netters are not bound by the same laws and rules as recreational anglers, but wanton waste carries a penalty of $100 for the offense and $20 for every wasted fish. In this pile of fish, the penalty should be pretty severe if enforced.

CBS Minnesota has the full story, video and interview with Auel on their website, minnesota.cbslocal.com.

Concerned Minnesota anglers are encouraged to contact their congressmen and women about enforcement of the wanton waste laws.