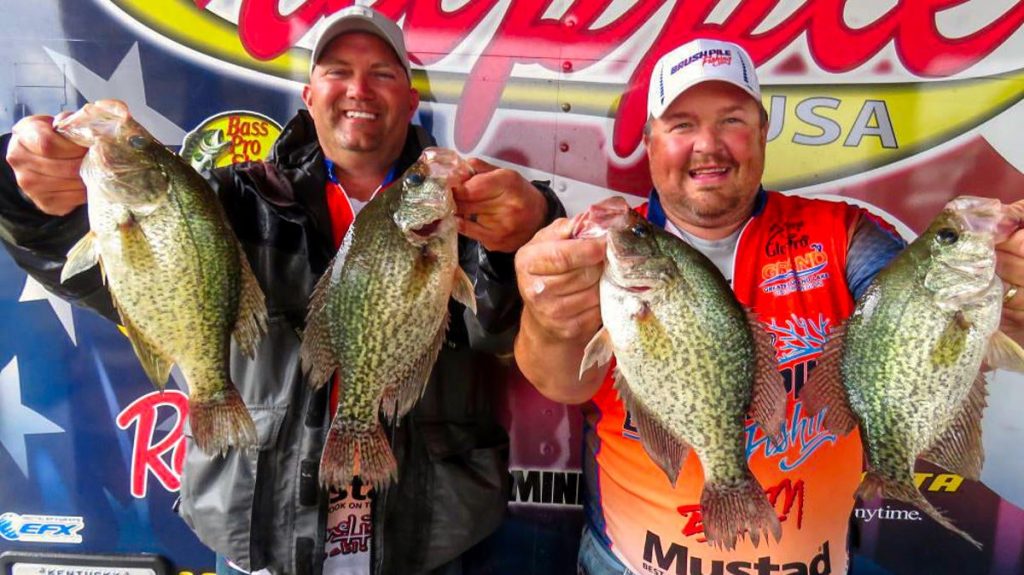 Crappie anglers from several states traveled to Old Hickory Lake at Gallatin, TN to participate in a Crappie USA Season ending Classic. The October 25th and 26th event was presented by Bass Pro Shops Cabela’s. Local and traveling anglers fished for cash, prizes, and an opportunity to compete at the 2019 CUSA Classic which will feature a guaranteed payout of $125,000 in cash and prizes.

Pre-fishing was reported as spotty by most anglers. They were on one day and off the next. A majority of anglers forecasted the win would come from anglers one-poling or shooting docks. Their predictions held true, as the Pro Division winners reported dock shooting as their strategy.

The weather changed on Friday after a week of sunshine and perfect weather during prefishing. Tournament day-one started with high overcast skies and air temperatures in the high 40s. Mid to late morning brought mist to drizzling rain to most of the area. Afternoon temps rose to the low 60s with winds out of the east at 10-15 mph with continuous rain showers through the weigh-in.

Day-two saw the inclement weather worsen with heavier rain and winds that gusted to 40 mph to create another challenge for the anglers.

A total of 129 boats fished the Old Hickory eventâ€”52 in the Pro Division and 77 in the Amateur Division. A total of $127,000 was distributed to the winners.

The day one leaders in the Pro Division were Harold Maddux and Brian Oldham with 9.31 pounds. Ryan Kennedy and Scott Sipes were in the top spot following day one in the Amateur Division with 10.39 pounds. Big Fish on day one went to the team of Neal Alvis and Scott Bunch with a 2.05-pounder. That slab held up as big fish of the tournament. The stage was set for the final day of the Classic.

The 2019 Crappie USA Classic winners are Jason Koesters from New Bremen, Ohio, and Jake Hengstler from Botkins, Ohio. They dock shot their way to a 19.75-pound bag of Old Hickory crappie. Their two-day weight earned them a fully rigged Ranger 518 boat valued at more than $49,000. They added second Big Fish of the tournament for $1,000, the B’n’M Poles Bonus of $500, the Driftmaster Bonus of $300, and the Jenko Bonus of $100.

Koesters and Hengstler used a couple of methods to fish Cedar Creek. Their most productive method was shooting docks.

They found 5 weigh-in fish off of one dock on day-one but had to fish multiple docks to find the ones holding big fish on day two to finish their limit. They fished the strong winds using white and yellow jigs as their most productive colors.

They also cast jigs/minnows towards brush on the bank in shallow water. They used bobbers in 3 foot of water to complete their weigh-in bags.

Randy Pope and Steven Deitz claimed the runner-up spot in the Pro Division. The team from Hickory, N.C. put together a two-day weight of 18.21 pounds to finish in the second-place spot and earn a check for $7,000. They added the Ranger Cup Pro Bonus of $250.

Pope and Deitz shot docks around East Camp Creek finding most of their fish towards the back of the creek. They had good luck early on Friday, catching their tourney fish by 10 o’clock in the morning.

“The bite slacked off on Saturday,” said Deitz. “We fished hard all day Saturday to finish our weighers. We used 32-ounce chartreuse and white Lit’l Fishies Pope Special, exclusively.”

The third spot in the Pro Division went to Harold Maddux from Mt. Juliet, Tenn. and Brian Oldham Ashland, Ky. They weighed a two-day limit of 17.69 pounds to earn a check for  $ 3,000.00.

Maddux and Oldham started off one poling in deep water but struggled to keep their fish alive. After losing a couple of fish they decided to move to shallower water. They used Sho Nuff colored Slab Curlys from Crappie Magnet to catch most of their fish.

Practice fishing was very good for Maddux and Oldham but they reported that the fish  shut down when the cloud cover came on tournament day. Nevertheless, they caught around 60 fish for the two days of competitive fishing.

The Georgia team of Steve Deason from Gray, Ga. and Rick Howard from Warner Robbins, Ga., finished in fourth. They brought an Old Hickory bag of 16.87 pounds to the scales to earn a check for $1,700.00.

Deason and Howard long lined during the week in practice but without a lot of success. Once they decided the long lining was not going to produce, they switched to dock shooting and it paid off.

“There were some very good docks,” said Deason. “The problem was that there were not as many on day two.”

They fished Cedar Creek using Black/White Sugar Bugs. They found their tournament fish on a small number of docks. They finished the two-day tournament catching around  45 fish on day one and 20 fish on day two.

Neal Alvis from Rogersville, Tenn. and Scott Bunch from Morristown, Tenn., rounded out the top five. They weighed 16.7 pounds to claim the 5th spot and earn a check for $1,200. Their bag included the Big Fish of the tournament at 2.05 pounds to add an additional $2,000 to their payout.

Alvis and Bunch traveled a lot going from the dam to Station Camp Creek. They reported that the fish scattered as the weather changed. The team targeted fish in 15-25 feet of water with the better white fish coming from about 25 feet.

The Tennessee team used Crappie Magnet Slab Magnets in black/chartreuse, pumpkin pie, white/chartreuse, and Mermaid colors. They used B’n’M Poles to one poled most of the time until moving to dock shooting to finish out the tournament on day two.

“We single poled brush on Friday,” reported Bunch. “The bigger fish just did not show up. Neal Alvis caught the big fish in 18 foot of water on a Slab Magnet by Crappie Magnet in the Mermaid Color, blue and chartreuse.

“We used the Crappie Magnets in the same colors but with lighter heads to shoot docks using B’n’M Sharpshooter rods,” Bunch said.

The Remaining Pro Division Teams in the Money 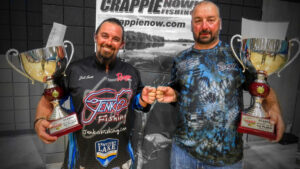 The top spot in the Amateur Division on Old Hickory went to Shawn Salyers and Josh Lovett. The Murray, KY team brought a two-day total weight of 18.29 pounds to the scales to claim the first-place spot. They were awarded a Ranger 188 boat package.

Salyers and Lovett fished Spencer Creek both days. They used Jenko double minnow rigs to soak minnows over brush piles. They also used some Jenko baits during the tourney with the Blue Monkey color working best. They found the fish in 14-17 feet of water.

“Friday morning, we started spider rigging in the back of Spencer Creek, reported Salyars. “We were using the Garmin Live Scope and pushing minnows on 14-foot Jenko Slab City rods rigged with 3/8-ounce Jenko Double Minnow rigs. We would push up in the brush piles and let them sit. That got us into second place on day one with more than 10 pounds.”

On Saturday morning they started doing the same thing but the bite had changed with the weather and they were not doing as well.

“We put up the spider rig,” Salyars said. “And got out the Jenko 11-foot HyperSense single rods and started single poling the brush piles with 1/16-ounce pink Jenko Big T Slasher jigheads. We used the new blue monkey and juice colors of the Jenko Big T Paddle Fry baits. That combination allowed us to get the day-two weight of 8.27 pounds to seal the win with a total of 18.29 pounds.

The Runner-Up spot in the Amateur Division produced a tie at 17.55 pounds. There was less than a pound separating the three teams from the top spot.

Dewayne McCord from Wingo, Ky. and Eddie Feagin from Farmington, Ky. put their talents together to join the other second-place teams and earn a check for $2,670. They added the Ranger Cup Bonus for an additional $125.

Glenn Ward from Elizabethtown, Ky. and Donnie Miller from Sonora, Ky. were the second team in the three-way tie. They matched the 17.55-pound weight to earn $2,670.

The final team in the three-way tie for second was  Dominic Dugic from Warren, Ohio, and Jeffery Lee from Newton Falls, Ohio. They matched the 17.55-pound weight to earn $2,670.

Bardstown, Ky. angler Stephen Crepps teamed up with Chad Crepps from Coxs Creek, Ky. to claim fifth-place in the Amateur Division. They weighed a two-day total of 17.45 pounds to earn a check for $700.00.

The Remaining Amateur Teams in the Money