Balsa crankbaits have a mystique about them, especially the ones of yesteryear. Several major tournaments have been won on old Bagley’s balsa crankbaits. The Big O was a staple among tournament anglers for years, and it still stays hidden in the secret arsenal of savvy competitors.

My own inheritance will no doubt involve egg cartons full of balsa crankbaits my father has had for more than 30 years. The norm for the last several years has been to manufacture plastic crankbaits with the advent of injection molding. Of course there are still great wood crankbaits like the Rapala DT series, Bagley’s and others

But in recent years custom balsa crankbait makers have garnered almost cult followings. East Tennessee has long been a hotbed of shallow wood crankbaits. While there aren’t many, there are a few custom crankbait makers out there, including one well known name. 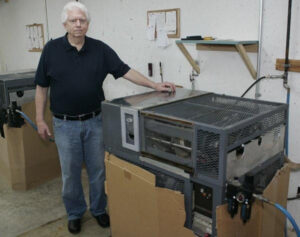 Ed Chambers stands next to one of his crankbait carvers

Ed Chambers, owner of Zoom Bait Company, is a true tinkerer. He’s always working on some new idea, whether that’s in plastics or in his crankbait company, WEC. WEC literally stands for William Ed Chambers.

Chambers got a big kick out of that.

Chambers has been carving and painting crankbaits for many years, and his WEC baits are another labor of love for him. He wants a crankbait to be a certain profile with a certain action with a certain paint job, and he goes to work to make something that doesn’t exist on the market.  While he has automated many of his processes, he still paints every single crankbait and engraves his initials and the bait’s name on every bill.

That doesn’t sound like a lot until you consider the WEC operation makes 31 different models of baits, and each bait can have as many as 55 steps just to paint a finished crankbait. Then there is the matter of cutting the balsa, smoothing the crankbait, inserting hook hangers, bills, line-ties, weights to balance the action, hooks, paint, engraving and packaging. Because each bait is so incredibly labor intensive, Chambers only puts out about 4,000 crankbaits a year.

But because he puts so much attention into each bait, everything about it is precision yet uniquely personal. He lays at night thinking about how to improve line ties and lip angles to make a bait swim or act a certain way. He has bins and bins of crankbaits, parts, lips, hundreds of different size insert weights, hook hangers, wire hangers for line ties and more in various rooms of his WEC facility. In fact the facility itself is something special.

The WEC plant is where Zoom originally started. It’s basically built like a gypsy colony. As the demand outgrew their machines, they had to make more space. Originally starting in an old horse barn, they poured a slab foundation and put two injection molding machines together to get the shop started.

As they added machines, they’d pour another section of concrete. As they filled the barn, they added on to it. As that addition filled, they’d add another building or trailer and then deck and cover walkways between the buildings. When Zoom finally moved to their current plant, this became a place for Ed to start his other hobby – crankbaits.

Now the wings are separated by function. Everything from cutting, priming, painting, inserting lips and packaging are in all different areas of the colony. Our favorite part was Ed’s famous test tank. It looked like nothing more than an old bait tank for keeping minnows, but it sort of fits with Ed’s simple philosophy of identifying a problem and putting a simple solution to it. When he wanted to see how effective a crank was on a laydown, he literally put a 2×4 in the water at an angle and swam his crankbaits over the log with a half a rod and some monofilament.

Chambers keeps his own private tackle room at the WEC Plant, and it’s plain to see that the owner of two incredible bait companies is just a common fisherman like the rest of us.

As we went through the plant, Chambers would stop and show us things that were so cool, we had a hard time keeping a straight face and not smiling like little kids on a shopping spree in Toys R Us.  He pulled out a tray of finished crankbaits all painted but without hooks yet. Then upon closer inspection we noticed the bills were missing. 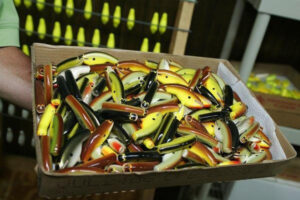 “I leave the bills out until the very end,” Chambers said with a sly grin aimed at Eddie Wortham and Chris Baxter, two of his lead guys at Zoom and very avid anglers. “Otherwise some of these baits might accidentally walk out of here.”

We all got a big chuckle out of that. Chambers’ laugh really shows the fun and love he has for making crankbaits. That’s something we as avid anglers love to see in any company – a true love for fishing and the products they make.

Basically from what we could gather, a WEC crankbait is first cut from an automated machine that Lee Sisson built but Chambers later revamped and reworked to do what he needed it to do. He inserts a metal die into the middle of the machine. Two rotors follow along the contour of the die and the machine cuts two halves of balsa to precisely match the die.

Then the weights and hook hangers are inserted. Then the baits are smoothed of all their rough edges. From there, each bait goes to be primed. Then the baits are allowed to dry anywhere from 24 to 48 hours. Then the baits move to the paint room where Chambers hand paints every single crankbait. After that, he has some help with hooks and packaging, but not until he’s etched his initials and the crankbait’s name into the bill.

We’ve thrown the Tapp and E2 a bunch. In fact, the Tapp was the first custom crankbait I ever bought. So we had been familiar with his baits. But we had no idea how much he cares about the workmanship of his crankbaits. You have to absolutely love it to dedicate the amount of time he has perfecting each model and constantly improving his paint jobs.

As a special treat, he pulled a small beer flat from a closet near his paint room. In this flat we saw very unique looking shallow running crankbaits.

“We haven’t decided for sure on the name,” Chambers said. “At first we were going to call it the Willy. But then we called it the EZ. Maybe we’ll call it the Big EZ. Reach in there and get you a few.”

We looked at each other with a peaking curiosity, hoping we all just heard the same thing, and then we were on the crankbaits like wild dogs on rib bone. Chambers sat down and signed eight crankbaits, two each for the four of us. Even Wortham and Baxter were in awe of the signed crankbaits and they work with Chambers every day. Just shows the power and admiration of his creations.

I’ve already since put mine in a shadow box that I plan to put with a picture of Ed and I in there. Meeting someone with so much passion and fond memories for fishing of his stature in the sport was something I’ll always remember. The third crankbait I grabbed has already been swimming on Kentucky Lake. I can honestly say that I get a giddy smile on my face when I throw it knowing what all went into it and how lucky I am to have one of the first ones. 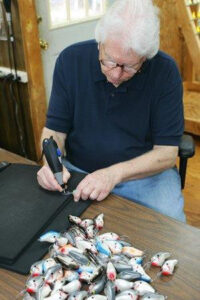 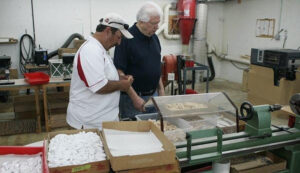 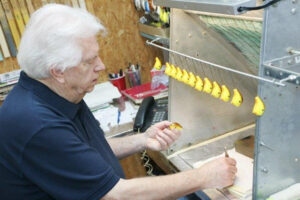