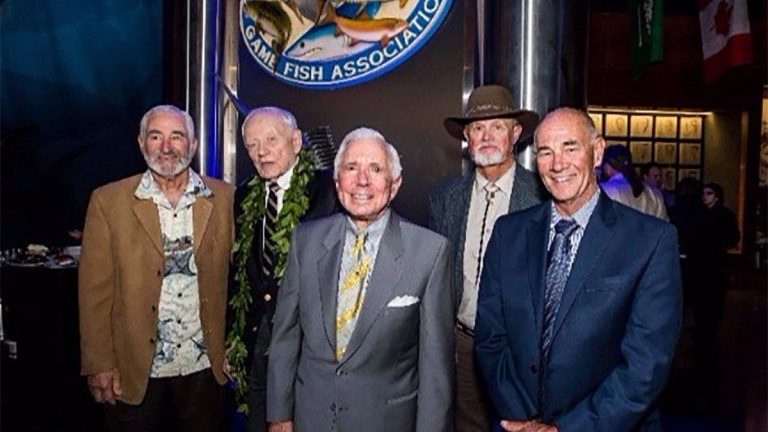 The International Game Fish Association (IGFA) Fishing Hall of Fame Class of 2017 was honored on Sat., Oct. 28, in a ceremony held at the new IGFA Fishing Hall of Fame located in Johnny Morris’ Wonders of Wildlife National Museum & Aquarium in Springfield, Mo. The 2017 inductees include Rick Clunn, Larry Dahlberg, Peter Fithian, Mike Levitt, and Dr. Eric Prince. These five anglers join 116 fishing greats in the IGFA Fishing Hall of Fame and were recognized for their extraordinary achievements in recreational fishing around the world.

The 19th annual IGFA Fishing Hall of Fame ceremony featured remarks from IGFA Chairman Charles W. Duncan III, IGFA President Nehl Horton and Bass Pro Shops Founder and CEO Johnny Morris, who is also an IGFA Trustee Emeritus and a member of the IGFA Fishing Hall of Fame. IGFA Trustee Andy Mill served as Master of Ceremonies as the Class of 2017 inductees shared their appreciation and passion for recreational angling with those in attendance.

The 2017 IGFA Fishing Hall of Fame honorees were recognized for their contributions to the sport fishing community and are highlighted below.

Rick Clunn is a four-time Bassmaster Classic winner (one of only two anglers to achieve the honor) and is a member of the Bass Fishing Hall of Fame. When he’s not fishing, Clunn shares his love of the sport with children in schools across America. He is recognized by the IGFA Fishing Hall of Fame for his endless enthusiasm for the sport of bass fishing, his unmatched four decades of winning B.A.S.S. events and his amazing bass fishing prowess.

Larry Dahlberg has fished for more than 50 years in 80 countries and is the host of The Hunt for Big Fish. He created the unique “Dahlberg Diver” fly and is responsible for many other fishing innovations. He’s received the Henshall Award by the Federation of Fly Fishers, is a member of the Freshwater Fishing Hall of Fame and was the recipient of the 1999 IGFA Conservation Award. Dahlberg is recognized for his lifetime of fishing innovations, his awarding winning television career and his conservation efforts.

Peter Fithian is best known as the founder of the Hawaiian International Billfish Tournament (HIBT), the “Grandfather” of all billfish fishing tournaments. With more than 50 years of rich history, the HIBT is one of the longest running tournaments of all time and the birthplace of countless innovations in angling tactics, tournament management and billfish conservation. Fithian also founded the Pacific Ocean Research Foundation (PORF) to learn more about Pacific blue marlin, and was instrumental in the foundation of the Japan Game Fish Association (JGFA). Fithian is recognized by the IGFA for his lifelong commitment to improve the tournament sport fishing experience and for his efforts in the conservation of game fish across the globe.

Mike Levitt developed a passion for light tackle angling in the 1960s, which led him to the IGFA. He has held 16 world records, including light tackle records for black and white marlin. A former Chairman of the IGFA, Levitt spearheaded efforts to build the IGFA Headquarters in Dania Beach, Fla. Levitt led the design and financing of a succession of custom sport fishing boats, which helped to develop the prototype for the large sport fishing boats widely used today. The IGFA recognizes Levitt for his angling achievements, charitable acts and innovations in sport fishing.

Dr. Eric Prince is considered one of the world’s top fisheries scientists, and is an angler, researcher and proponent for the sport of fishing. He’s had an illustrious 35-year career as a billfish biologist with the National Marine Fisheries Service (NMFS) and his research, primarily on billfish, has been published over 100 times. Dr. Prince has been a driving force in the Adopt a Billfish satellite tagging program and a leading researcher and proponent of the use of circle hooks. He’s served conservation through his research and helping to create The Billfish Foundation, which earned him the IGFA Conservation Award in 2016. Prince is recognized by the IGFA for his extensive research on important recreational species to ensure their sustainable management and a lifetime of fishing.