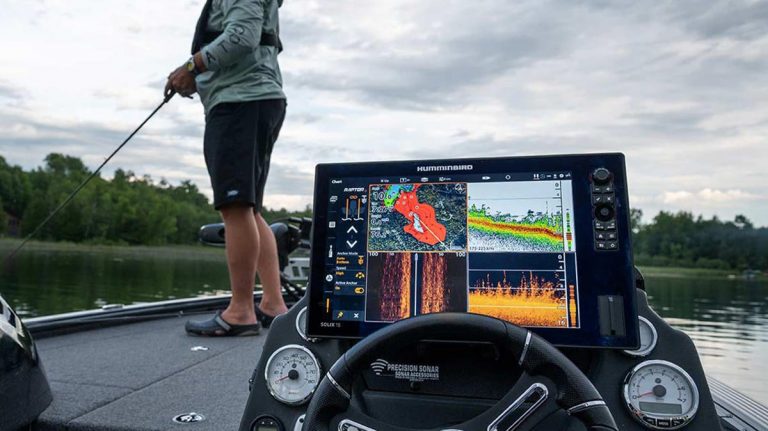 Humminbird announces the introduction of the SOLIX ® Series third generation (G3) units, building on the brand’s commitment to deliver technology advancements that give anglers a more complete picture of the water and structure around them, to find and catch more fish.

The new SOLIX G3 models feature a powerful new dual-core processor, delivering lightning-fast responsiveness from either the touch screen or keypad via SOLIX’s Cross Touch ® interface. With the intuitive control of Cross Touch, SOLIX provides a customizable fishing experience that puts the most important features and functionality at the forefront. Create custom screen views and save up to ten as favorites in a quick-access sidebar menu, along with the ability to modify data overlays, waypoint settings and more, to match an angler’s fishing style and preferences. The SOLIX G3 Series now packs more technology into large, bright screens, giving anglers their choice of SOLIX G3 units in 10.1″, 12.1″ or 15.4″ high-definition, sunlight-viewable displays.

“The new SOLIX G3 fish finders give anglers a constant stream of information to maximize their time on the water,” said Matt Cook, Humminbird Brand Manager. “It combines the best technologies and large display sizes in a package that can be customized to an angler’s preferences, so they have the views, data and intuitive control they need to find fish faster.”

The new SOLIX G3 Series provides an expanded range of MEGA Imaging+â„¢, giving anglers the ability to view the highest quality imaging sonar on the market, now at deeper depths and further distances. MEGA Imaging+ on SOLIX G3 models now reaches up to 250-feet deep with MEGA Down Imaging+, and up to 250-feet to each side with MEGA Side Imaging+, enhancing anglers’ ability to find and focus on productive fishing waters. Humminbird’s Dual Spectrum CHIRP sonar is built-in to every model and provides exceptional 2D sonar which displays easily-identifiable fish arches and produces superb target separation. For anglers looking for deep-water performance, SOLIX G3 models are compatible with optional Airmar ® CHIRP transducers and now include Airmar transducer ID, making initial setup easy and ensure peak sonar performance.

Standard on SOLIX G3 models, built-in GPS and Humminbird Basemap provide depth information and navigational aids for all continental U.S. coastal waters and over 10,000+ U.S. lakes and rivers. Premium chart options from Humminbird include LakeMaster ® and CoastMasterâ„¢ charts, which provide exclusive compatibility and features to Humminbird users. Additionally, SOLIX G3 models are also compatible with Navionics ® charts, providing Humminbird users the widest selection of charts available, ensuring they are covered with premium chart options no matter where they fish. For anglers looking for an extra edge, all SOLIX models include AutoChart ® Live, allowing anglers to easily create their own custom maps in real time. Simply turn the feature on and watch as depth contours and even vegetation and bottom hardness layers appear on-screen.

The upgraded performance and sonar upgrades of the new SOLIX G3 Series are available in 10.1″, 12.1″ and 15.4″ Cross Touch displays, offering an angler’s choice of either MEGA Side Imaging+ or MEGA Side Imaging+ CHO models in each display size. Both model variations will support MEGA Side Imaging+, MEGA Down Imaging+ and Dual Spectrum CHIRP sonar, as well as optional Airmar ® 2D CHIRP transducers. However, CHO (Control Head Only) models do not include a transducer, and provides anglers the option to pick the precise transducer for their needs. SOLIX G3 models come with a 2-year limited manufacturer’s warranty and will include models ranging in price from $2,199.99 – $3,499.99.