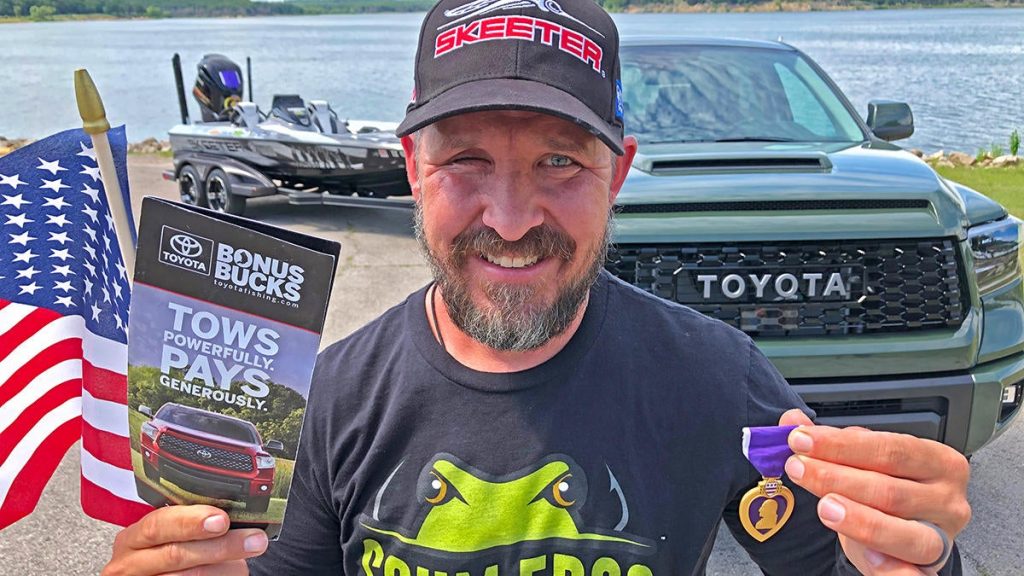 Bassmaster Open Series angler Brent Homan sees every target he casts to with one eye. He lost the other eye on June 10, 2007 when an IED blew up the U.S. Army Bradley Fighting Vehicle he was commanding in Iraq while protecting the world from terrorism.

Homan, a successfully married father of three who now lives in Graham, Texas west of Forth Worth, also suffered a mangled thumb. “Doctors in Balad, Iraq told me they thought they could save my eye but not my thumb. I told them I needed my thumb to fish with,” recalls the Purple Heart recipient.

Five days later, back on American soil at Brooke Army Medical Center in San Antonio, Homan lost his right eye, but kept the thumb. Apparently, God knew he was a bass angler and would need the thumb to fish with – ultimately, Homan’s greatest therapy.

Thirteen years after the injury, when it was time to buy a new truck, Homan’s vision for the brand of vehicle he’d purchase was perfectly clear. On Memorial Day, 2020 – he bought a brand new Toyota Tundra, and then signed up for Toyota Bonus Bucks.

“The biggest reason I bought a Tundra was to be aligned with Toyota and B.A.S.S. – those two brands do a ton for bass anglers and one another,” says Homan. “Plus, it’s just a bad to the bone truck that’s assembled by American workers in Texas,” he says proudly.

Homan says his dream day of fishing would involve casting Scum Frogs and vibrating bladed jigs around matted vegetation on the Potomac River. But this year, his eighth season to compete in the Bassmaster Opens, he’ll focus on working hard to collect Toyota Bonus Bucks checks at the Arkansas River, Sam Rayburn and Neely Henry, before finishing the season near home on Lake Lewisville.

“Wherever we go, I’ll promise you I’ll have plenty of towing power for my Skeeter-Yamaha. I’ve literally had to learn to ease into accelerating with this Tundra, because the torque is so unreal compared to other trucks I’ve driven – especially going uphill,” says Homan.

In a sense, his new Tundra’s power to move forward reflects the supreme determination shown by Homan himself – a deeply admired Purple Heart recipient rich with kindness, humility, and perseverance.

Much like Homan, you too can cash-in on Toyota Bonus Bucks. You just have to own or lease a 2016 or newer Toyota Truck, sign up free for Bonus Bucks, and be the highest finishing registered participant in one of the hundreds of tournaments supported by the Program. To learn more, please visit www.toyotafishing.com.