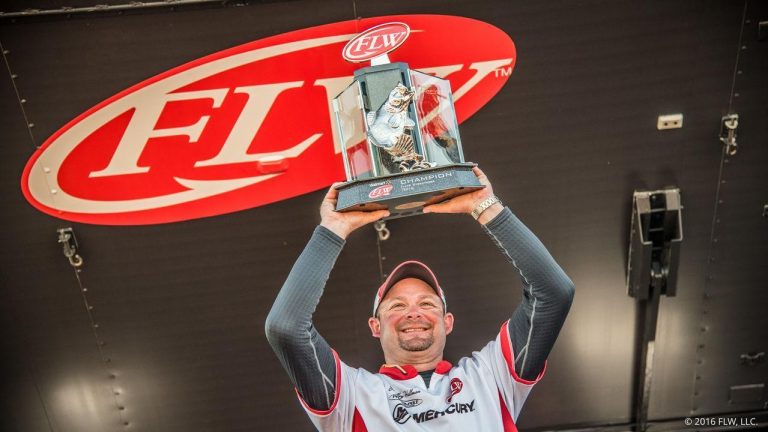 Pro Bradley Hallman of Norman, Oklahoma, brought just two bass to the scale Sunday totaling 6 pounds, 8 ounces, but it was still enough to earn the win at the Walmart FLW Tour at Lake Okeechobee presented by Ranger Boats. Hallman’s four-day cumulative total of 16 bass weighing 71 pounds, 2 ounces earned him the win by an impressive 14-pound, 14-ounce margin over second-place pro Alex Davis of Albertville, Alabama, and $100,000 in the tournament that featured 169 of the best bass-fishing anglers in the world competing in the first FLW Tour event of the regular season.

“This week on Lake Okeechobee has been great, even magical,” said Hallman, who is now the early frontrunner in the 2016 FLW Tour Angler of the Year race. “I was one of the lucky ones who pulled into an area that had a lot of big females coming in to spawn. Even today, after four days of fishing, it was obvious that they were still there.”

Hallman said that his area, which he remained in throughout the entire tournament, was a long stretch of reed clumps in South Bay.

“The reeds I focused on ended up being the biggest, thickest reed heads in the entire bay – which is huge in terms of surface area,” said Hallman. “I knew they held a lot of fish, so all I had to do was find the biggest, quality bass.”

Hallman said that a key development in his area was finding the clearest water possible – a difficult task considering the strong north wind that challenged competitors throughout the event.

“I would lose reeds each day as the water muddied, but my primary clump, even with all of the wind today, still had somewhat clear water around it,” said Hallman. “Dialing in on the thickest reeds and staying ahead of the shifting water color was really what sealed the deal for me.”

Hallman said that he primarily flipped a Backwater Blue-colored Reaction Innovations Sweet Beaver, but also utilized a variety of other colors including Penetration and Hematoma, each time using a black and blue punch skirt. Hallman went on to say that even though he used a few different colors to entice bass, it was his technique that defined the pattern.

“For me, it was more about how fast or slow I was going to pop the bait up and down, or if I was going to leave it at the bottom on the next cast,” Hallman said. “That was the game-changing approach.”

Overall there were 42 bass weighing 70 pounds, 9 ounces caught by pros Sunday. Seven of the final 10 pros weighed in five-bass limits.

Tim Cales of Sandstone, West Virginia, won the co-angler division and $20,000 Friday with a two-day total of 10 bass weighing 30 pounds, 11 ounces, followed by Gary Haraguchi of Redding, California, who finished in second place with 10 bass weighing 27 pounds, 5 ounces worth $7,500.