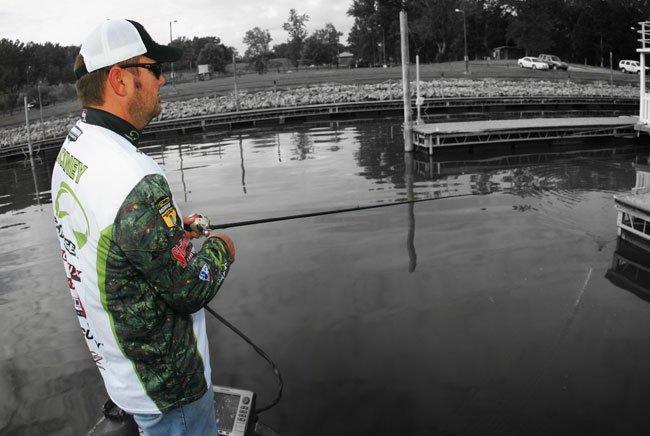 Frogs and grass go together like peanut butter and jelly, caramel and apples, burgers and fries. Now that we’re all hungry on the thought of food, we can probably relate to the bass and their affection for hollow bodied frogs. We’re not even sure if the bass thinks a hollow bodied frog is a frog, but he knows it’s something good to eat.

But what several savvy pros know trips up anglers too much is where they opt to throw a frog. Most anglers pigeon-hole their frogs like vegetarian friends. They only reach for them when there is some green leafy stuff present. The fact is it’s not the cover that makes bass eat a frog. It’s the way the frog looks that makes them eat it.

“I think a frog is a topwater jig,” said Strike King pro and avid shallow water expert, Greg Hackney of Gonzalez, La. “A frog gets you big bites, just like a jig does. It’s a big meal for a big bass, and what’s nice is that it gives me the opportunity to fish a jig slowly on the bottom and on the top with a similar result.”

Obviously Hackney doesn’t think the frog looks like a jig or a crawfish, but the profile is something the bass likes and reacts to with a vengeance. The key is putting it in front of a bass. That’s where most guys limit themselves. They think a frog is just a grass lure. But it is that and so much more.

Veteran Bassmaster Elite Series angler and television personality Shaw Grigsby of Florida, knows a thing or two about fishing a frog. He lives in a prime area to practice and study a frog’s effectiveness as it’s a very natural forage for fish in his neck of the woods. But he’s found it works in many other places as well.

“Any time there is a topwater bite going, I will have a frog on the deck,” he said. “It’s not just for grass, and on tour, I’ve probably caught more bass on frogs away from grass than around it because a lot of the fisheries we visit don’t have any grass.”

The magic of a good hollow bodied frog in water other than matted grass is its ability to walk. If a frog can’t walk or even just hop along, slapping its nose on the surface to create an attractor for the bass, then it’s not worth much to an angler. You need to be able to move it and give off almost a waking appearance to the bass. It’s more like a buzzbait than say a popper in more open water situations.

Speaking of situations, there are several that really stood out to both of these pros.

“I really like it around docks,” Hackney said. “I’ve caught some really big bass fishing it around docks. It’s so good because you can throw it as hard as you want under pontoons, walkways, floats and more and most of the time it won’t get hung up because it’s so snagless.” 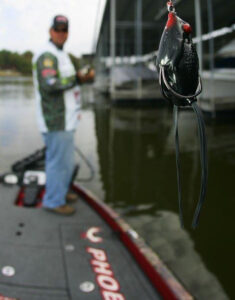 Hackney demonstrated for us in a marina on Kentucky Lake. And wouldn’t you know it, he proved his point when a big bass blew up all over his frog and stripped drag before pulling off. Hackney shrugged it off as punishment for not checking that his drag was backed off.

“That’s what I get for not checking my drag,” he said. “But you can see how effective it is in this situation now.”

He was applying the same principals he does with a jig around cover. Trying to hit corners, angles, ambush points with frog to give the bass the best chance to pounce.

Grigsby echoed what he said about other pieces of cover.

“I fish it around wood, rock, man made cover and more,” Grigsby said. “It doesn’t matter what’s there. It just matters that the bass is there and feeding on top.”

Both anglers like a heavy power rod with a little tip action for casting the frogs and heavy 65-pound braid. Both anglers opt for Quantum rods and reels for their fishing. Hackney was fishing his frog on a Quantum Smoke rod with a Quantum Energy PT reel. While Grigsby opted for a Quantum Smoke reel and an older Quantum rod he’s had for a long time. He also likes the Smoke rods and Tour PT Rods for frog fishing. 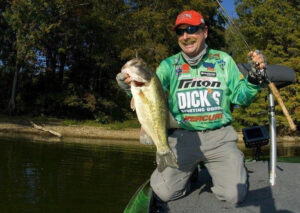 Hackney pays close attention to the frog and makes slight alterations to make it work like he wants. For getting the frog to walk like he likes, he will trim a few strands off each leg. Rather than shortening the legs, he likes to make less of them on each side.

Many anglers don’t realize that frogs float flat with more buoyancy from their legs in the back. So the more you remove the more the rear end weight will sit down in the water. So he starts slow, trimming just one or two strands and then checking how the frog walks. He cautions anglers to go slow because once you remove legs you can’t add them back.

Both Hackney and Grigsby love the new KVD Sexy Frog from Strike King. The frog walks really well and looks good sitting in the water. They are also hard at work designing a bunch of new colors.

“The more you cut off the frog legs the more the frog will roll and walk,” Hackney said. “That’s good around more open cover but you don’t want to trip too much off around grass because it will roll on it’s side a little more and become more snag prone. But allowing it to roll and walk lets the bass see those paint jobs on the sides and top better and gives them more to react to around other forms of cover and open water.”

Hackney and Shaw have a lot of confidence with frogs around other cover because of how many big bass they’ve caught fishing for bass with it. They work the frog with very small twitches of the rod tip in a downward angle, making sure to give the frog slack to let it do its thing. The nice thing is a frog works in dirty water as well as clear water because it has a real natural presentation. It can be cast hard and fast or pitched into tight places making it versatile in many more situations than most bass fishermen realize.

Fall is a frog weather and the bass are feeding up for a long winter. Now is a good chance to  catch some big bass on topwater lures. And if there is some sort of cover, a frog can give you an advantage without all the treble hooks to cause problems. Laydowns, stump, docks and even rip rap can be productive frog water. It’s not just for grass. It’s big profile and a natural presentation can attract some big bites for anglers bass fishing this fall. 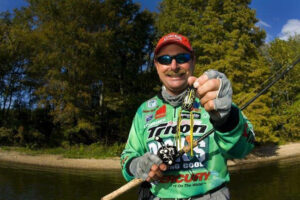