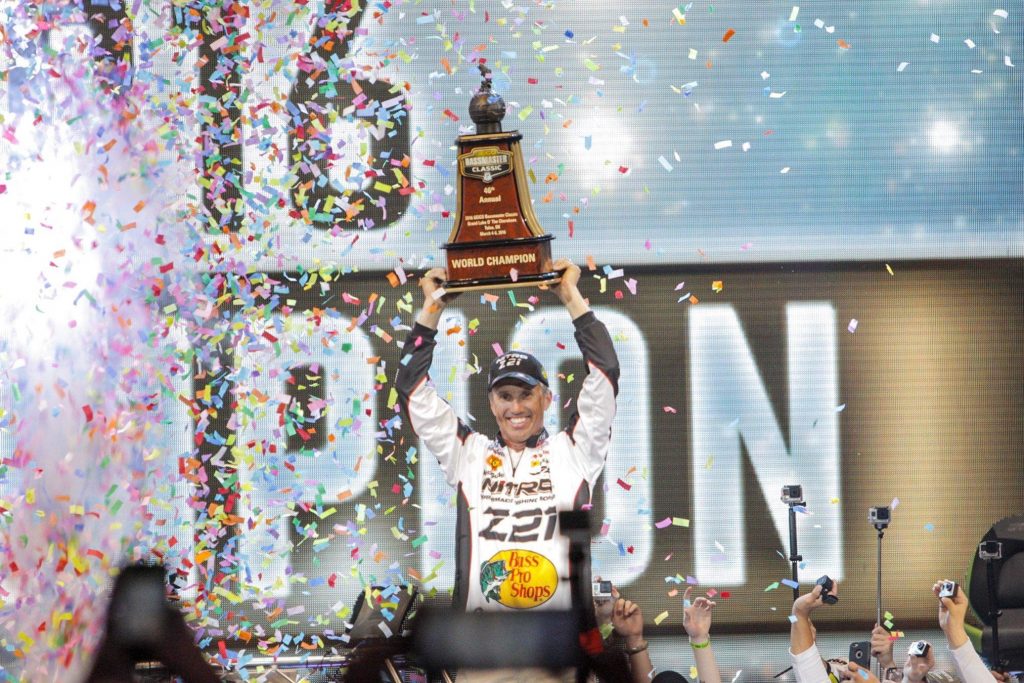 Edwin Evers won the 2016 Bassmaster Classic with a three-day total of 14 bass weighing 60 pounds, 7 ounces. With one of the most impressive last days in Bassmaster Classic history, with a record-setting swing of 16 pounds, 4 ounces from where he was to where he ended up, Evers caught an amazing 29-pound, 3-ounce limit to seal the victory beating early leader Jason Christie by 10 pounds.

Evers said on day two it would take a miracle to catch Jason Christie. Evers’ wife handed him a scripture before takeoff Sunday morning — “I can do all things through Christ who strengthens me.” There you have it.

“It was a magical day,” Evers said. “I don’t even know what to say. I’ve dreamed of that trophy since I was a little kid. My parents weren’t anglers but they took me fishing all the time. I was eat up with it.

“I caught all my fish the first day on one of my favorite prespawn baits — a Megabass Flap Slap down lake. I fished up the Neosho River yesterday and flipped a Zoom Z-Hog Jr. Then today I caught all my fish on a little Andy’s Custom Lures homemade finesse jig paired with a Zoom Critter Craw trailer down in the Elk River. It’s one of the few jigs you can still get with that old flat brown rubber which is so critical in cold water. I’m just so familiar with that part of the lake, and all that rain and mud this winter kept it from showing out until today. That’s what is capable in this lake; 29 pounds. I just don’t know what else you say about that.”

Here is a little more from the rest of the field on how they caught their fish on Grand Lake this week:

He caught all his fish this week on a 1-ounce Booyah Colorado spinnerbait with a Yum trailer. Christie seemed to be noticeably affected when a fan informed him that Evers had already caught a big limit early in the final day. “He’s a great fan and I don’t hold anything against him at all. He thought he was helping me out. But it definitely affected me. If I had lost by 1 pound it wouldn’t be so bad, but I just got whalloped today. I got my butt kicked. I thought I was going to be jerking a jerkbait here when I was practicing back in Decemeber. That’s what I prepared for. But that’s how these tournaments go. It’s always changing conditions. That’s what makes it so tough to win.”

“I caught all my fish this week on a crankbait. It was a white, fire tiger or crawfish colored Luhr Jensen Speed Trap. I was fishing the lower end of the lake. I fished in the Elk River a little the first day. I was just targeting shallow wood and rock this week. I caught all my fish on the crankbait. I hate March fishing; this is how it always goes. You can be in the best area and the fish just don’t bite for some reason because of some weird weather thing. Then some guy pulls up on something you’ve fished befoe and wrote off and they happen to bite like crazy that day. It’s just much weirder fishing than it is in August. I hate it.”

“I thought I was going to catch all my fish this week cranking. I was catching more than 20 pounds a day in practice. Then things started to change. I ended up pitching a black/blue Tightlines UV Bill Lowen Flipping Tube and a Lure Parts Online 3/8-ounce black/blue flipping jig with a Tightlines UV Bubba Craw trailer. I was focusing on the last channel swings in the back of a creeks, and I really had to slow down and fish methodically to catch the bass this week.”

“I caught all my fish on a crankbait this week. I knew yesterday that today would be better because of the wind. I fished banks that had big chunk rock on them with quick access to deep water. Red was the only color I could get bit on this week.”

“I caught my fish on a 3/8-ounce Booyah Bankroll Jig.”

“I threw a Strike King KVD 1.5 Square Bill in Tennessee Shad all week to catch my fish. I was just targeting chunk rock banks and laydowns I just didn’t get enough bites that second day. I think if I could have caught 5 yesterday we could have at least made it interesting. I lost a good fish one day and really I’m lucky to have caught what I did because every fish was just nipping at it and was barely hooked.”

“You would have thought chartreuse or something would have been the hot color this week. But for me a shad-colored KVD 1.0 Squarebill and a homemade flat-sided crankbait were the best baits even in the real dirty water. But I was fishing channel swing banks but not fishing on the bottom.

I would throw to the bank but your bites would come out there in 4 to 5 feet of water but only about 3 feet down. They were just suspending in that mud. I made a mistake in that I was catching all my fish doing that on 12-pound line. But I switched to 10-pound for the tournament because I thought it might get me a few more bites and get the bait down there deeper and I think I fished under a lot of fish. I can’t believe I did that.”

“I threw a 1/2-ounce Terminator double Colorado spinnerbait to catch my fish this week. I caught my fish late in the day everyday, and I could only manage 4 fish a day. I needed another hour or two each day in the afternoon to really do well in this tournament.”

“I caught most of my fish this week on a spinnerbait and Chatterbait just running the backs of creeks. I caught all my fish the first day up Horse Creek. Then the second day I fished all those pockets and never had a bite so I ran back down and fished Duck Creek and caught them in those pockets. It had to be pockets that had that fist-sized chunk rock. Those bluff rock banks weren’t as good. But if there was a channel swing in the very back of a creek and it turned to that kind of rock there was a fish on every one of those. I’m happy with how it went considering how tough practice was.”

“I made it rain with $2,000 in $1 bills. My key baits were a Luck-E-Strike G7 crankbait (from the original Wiggle Wart mold), a War Eagle Indiana Thumper blade spinnerbait and a homemade vibrating jig. I was just targeting shallow water 0 to 3 feet in the shorter pockets off the main lake.”

“I’m going to leave here this week wondering what happened? This is a great fishery and it didn’t really show itself this week because of weird water and weather. I feel like everything I’ve learned over 25 years of bass fishing in the prespawn you can just take and throw out the window.”

“I was catching fish on a Lucky Craft SKT MR crankbait between the docks. I would Power-Pole down between the docks and make 20 to 30-foot casts and they would hit right at the boat a lot of the time.”

“I caught them good the second day on a SPRO Fat John and thought I had it figured out. Today the deal was the Texas-rigged Missile Baits Baby D Stroyer when I couldn’t catch fish on the Fat John. I had a big one hooked behind a dock over a cable. When it came up it was 5 or 6 pounds so I was pretty calm and I let the fish go back down. It swam up to the cable while I was moving in to get it and it just stayed up on the surface and flopped until it got off.”

“I caught all my fish this week on a Strike King Lucky Shad and a Rapala DT 6. Most of the fish came on the Lucky Shad. I was targeting bass around big rocks the size of a beach ball up the creeks. It’s crazy it was so predictable on the lower end of the lake in practice, I quit casting to them and just driving around marking them all.

I got caught up on trying to hit all of them at first. Then I had one where I caught two in practice and then caught one in the tournament. So I thought I needed to just revisit the good ones where I caught fish multiple times. Then I did that, and it didn’t produce. So I’m just not sure what I should have done. I don’t understand why but it seemed like it got muddier down there during the tournament which does not seem right since it should clear up down there.”