The 2015 Bassmaster Classic kicks off on Grand Lake Friday, and we had an opportunity to visit with most of the anglers in the field on Thursday at media day to get their take on what is happening on the lake and this tournament will shape up come the weekend.

The weather was beautiful in Tulsa, Okla. on Thursday. The weather wasn’t as pleasant during practice and will be even more pleasant during the tournament. That had much of the 55-man field split as to how the tournament could go. While some guys were lamenting at how few bites there were during practice, other anglers were licking their chops at how good the fishing could possibly be over the weekend.

The water temps are in the low 50s and it’s going to just keep getting warmer throughout the three-day event. Air temperatures will be in the low 50s in the morning to low 70s in the afternoon. Which should send waves of prespawn bass into the creeks.

It’s no secret that much of the field will be concentrated on the upper-end of Grand Lake and fishing similar patterns in similar water. The lower end of the lake is cold and muddy and anglers for the most part, found bites hard to come by through practice.

About half the anglers we visited with were just hoping to get on some fresh water and get five bites because most of the fish they did catch were good quality.

While the other half of the anglers thinks it could be over for much of the field on the first day. 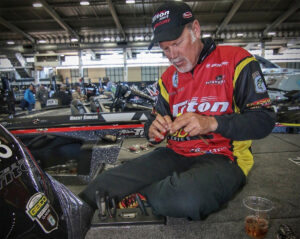 “This tournament is going to be about who can stay in that right frame of mind and keep a positive attitude and not rely too much on their notes from practices,” said previous Classic champion Boyd Duckett. “About half of the field will be out of it in the first day. They will go try to do what they did in practice and not fish the moment and struggle to catch a limit and be too far behind to stay in it. I hope I’m not one of those guys.

“I found some staging prespawn fish in practice but they won’t be there on Friday. I’m going to have to go and start where I never got a bite but where I know they are headed with the weather warming the water so fast this week. It was 41 the first day of practice. Now it’s 51. You can take all that stuff you found in practice and throw it out. What happens in those first few hours on Friday will direct what I’m going to do the rest of the tournament.”

One of the anglers we’re really watching this week is Bill Lowen. Lowen is as good a shallow, dirty water fisherman as there is in the country. He’s been thinking about the last time the Classic was here for several years and will be hungry for redemption.

“I got a funny feeling about this one,” Lowen said. “I had this same feeling in the last Classic here after I caught more than 20 pounds a day every day of practice until that snow storm hit and changed the whole tournament. This year I almost wish it wouldn’t warm up so fast. I want those fish to stay right where they are but they will likely move up there shallow and get where everyone can catch them.”

Some anglers are just hoping for enough bites to stay relevant the first day and learn from that.

“I caught 16-17 pounds one day, 19 pounds one day but it’s not like you get a lot of bites,” said Texas pro Keith Combs. “I tried to stay away from the crowds and go down in fish in that muddy water for nearly two full days and hardly got a bite before finally deciding I better go figure something out on the other end. I move up lake and caught them and then even found another little back up deal. So I feel like I can catch fish but it’s going to be a case of getting on the right stuff at the right time and not being right behind someone going in a creek or coming out of one.”

“Practice really wasn’t that good,” said Jordan Lee. “I mean I had one good period there towards the end of practice where I caught like 7 keepers and they were good quality so that made me feel better. But I fished a lot of water without getting a bite too. So I just want to get bit. It’s not like I think I can go out and only catch 5 and they all be big ones. I like to get more bites than that. I just want something to pull my string.”

Brandon Lester thought the concentration of anglers could play a huge role.

“We’re all going to be fishing in the same areas doing the same things. I mean it will be a crankbait, a spinnerbait or a little jig. You just have to hope you can move around and be on the right stretch at the right times.”

“Everyone here can catch them,” Duckett said. “They wouldn’t be here if they couldn’t. A lot of the new guys that have never fished a big event like this won’t be prepared to just go fishing. There is nothing like the Classic with the media boats, spectator boats and high pressure of it all. They guy that is going to win this weekend is going to be the guy that can just go out there and fish and not panic and not have to go back to his notes from Friday a week ago and try to do something that was working then because he’s in a panic.

I hope I can catch a few early to settle me down so I can just go fishing after that.”

Easier said than done. Fishing for $300,000 will get the savviest of anglers a little frazzled, especially when things don’t go as planned in the first few hours. This will be one of those tournaments where the old adage comes into play:

You can’t win the Bassmaster Classic on the first day, but you sure can lose it.

Check out more photos from the 2016 BASS Classic Media day 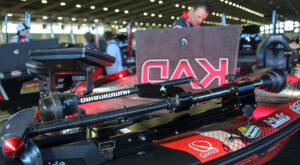 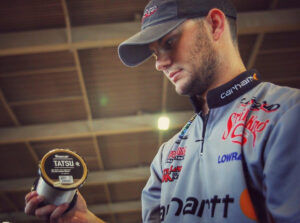 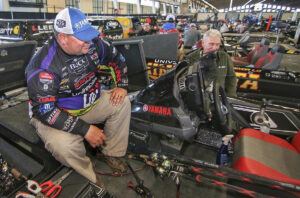 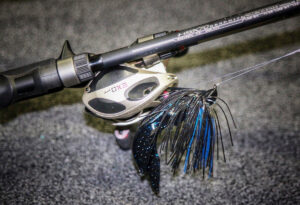 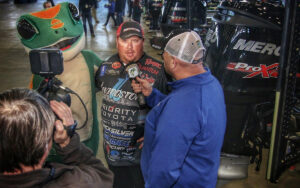 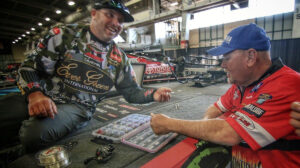