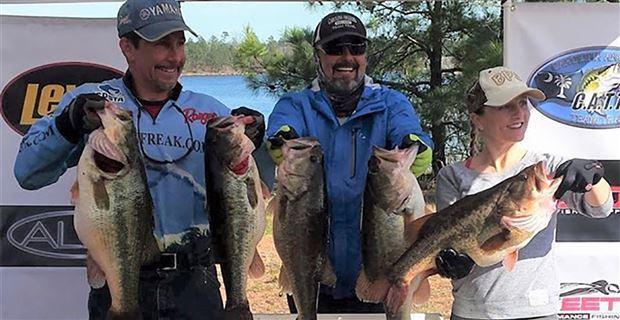 Shane Burns and his fiancé Bonnie Kelly, both from Durham, N.C. had two back-to-back tournament days on the 4,100-acre Shearon Harris Lake in North Carolina that they will remember forever.

In the first tournament on March 4, 2017, they weighed an amazing five-bass limit of 41.93 pounds and followed up the next weekend with five that went 46.89. Harris has a slot limit between 16 and 20 inches.

We had a chance to sit down and talk to Shane about the experience. 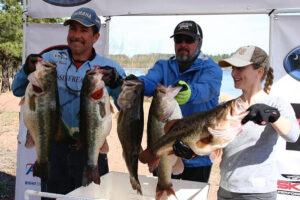 “The first tournament we were boat No. 86 out of 89 boats. I was concerned we would not be able to fish any of the areas I had found fish on in pre-practice, but when I got to my first spot I was surprised that I had it to myself. No one was in our area.

“We started fishing a Dave’s Tournament Tackle 3/4-ounce Tiger Shad Mag Willow spinnerbait and finished up with a Dave’s 4 and 5-inch Skinny Swim Swimbait. I had three or four good places to hit that were pre-spawn locations and the first spot on the first cast produced one right off the bat that I had to release—it was a 19 3/4-inch bass. I sat there the entire day to catch the remainder of the 41.93-pound limit. Our two big fish that day were 9.56 and 9.38 pounds, respectfully.

“In the second tournament, we used the 5-inch Skinny Swim and a 3/4-ounce Football Head Jig, also from Dave’s.

“We again started on the first location and from that spot culled eight fish over 7 pounds—one was 8 pounds and the two smallest bass we had that day were an 8.06 and an 8.04. Our two big fish were a 10.38 and a 10.91. We didn’t move off our waypoint on my HDS Lowrance 12 that second day. These were the most unbelievable days of my life and getting to share them with Bonnie was extra special. She added the 8.06 to the creel.

“Sunday, the day after the 46.89-pound limit, I took a friend out and had five over 40 pounds again and it was snowing hard that day. We were the only people on the lake.”

Mark Moore’s video of the team bagging one of their huge limits has gone viral. You can check it out below: