Repeatedly hooking up in a huge school of bass with a Rapala ® DT ®-10 crankbait, Ott DeFoe engineered a dramatic, come-from-behind victory Wednesday in a Major League Fishing Bass Pro Tour competition in Texas. Bass he caught on VMC ® hooks in qualifying rounds helped him reach the Championship Round.

“With that DT-10, I was trying to trigger bites,” DeFoe explained. “It was something I could burn through there and really try to get a reaction bite out of them. And that was what did it.”

“DT” stands for “dives to.” A DT-10, a round-lip crankbait, dives to a max depth of ten feet. Built of balsa wood, Rapala’s signature material, a DT-10 wobbles while swimming and deflects off cover to trigger bites from big bass around both grass and rock.

With only about 35 minutes remaining before the tournament ended, Defoe was in third place, trailing the leader by two pounds, 13 ounces. About an hour previously, he had been in a distant sixth place – his cumulative weight of bass caught by then was 12 pounds, 8 ounces; the leader’s weight was 34 pounds, 15 ounces.

But then Defoe saw a big school of fish on his side-imaging sonar screen and camped out nearby, determined to make a stand at the spot. Catching keepers on bucktail jigs, jerkbaits and topwaters, he chipped away at his weight deficit, climbing to third place and giving himself a shot to overtake the leader. Then he broke out the big gun.

“I picked up that DT-10 and four or five casts in, I can actually feel that bait bumping across their backs,” he recalled. “Then finally, I catch like a [2-pound, 3-ouncer] and then they come up and the whole school erupts. That was when I realized just how many fish were there.”

One of the next bass to bite his DT-10 was a 9-pound, 6-ounce behemoth that gave him a lead he never relinquished.
“That DT-10 is doing some work on the large ones!” Defoe exclaimed on camera in the MLF NOW! live webcast of the Championship Round, shortly after catching the 9-6 and a 5-3 that followed. “I love catching ’em cranking. That’s my most-favorite-est thing.”

When it was all said and done, DeFoe had won by more than 28 pounds. In the 8-hour Championship Round, he caught 23 scorable bass that weighed a combined 69 pounds, 12 ounces. And 18 of those – weighing 57 pounds, 4 ounces – came into his boat in the final 66 minutes.

“Unbelievable day,” he said. “This is the toughest group of fisherman I’ve ever fished against, all in one field, 80 guys. And I couldn’t be more honored to take one of those trophies home.”

Adding to the magic of the moment was the fact that the color pattern of his successful DT-10 is a soon-to-be-released design that he personally helped Rapala develop. It’s among several new DT designs scheduled to be unveiled in July at the fishing industry’s biggest trade show.

“We’re actually coming out with that this year at ICAST,” DeFoe said. “It’s called Big Shad. That’s what did most of the heavy lifting.”

Speaking of heavy lifting, when asked by an MLF reporter if he considered boat-flipping a 5-pound, 6-ounce bass he was reeling in as time expired – a fish he ultimately didn’t get into the boat in time for it to count – DeFoe said it wasn’t worth the risk of breaking his line and losing his now-famous Big Shad DT-10.

“I might’a, could’a horsed the fish and possibly flipped it … but I didn’t want to lose my bait,” he said. “That bait’s pretty special to me at this point.”

DeFoe won the multi-day tournament on Lake Athens, a 1,799-acre impoundment of Flat Creek, a tributary of the Neches River. Only the Championship Round was held on that fishery, which Texas Parks and Wildlife has nourished with several million largemouth fry and 2-inch fingerlings that are the progeny of ShareLunker fish. (A ShareLunker fish is any bass caught legally in Texas that weighs more than eight pounds or measures more than 24 inches.) The qualifying rounds were held on Lake Fork, a legendary big-bass reservoir located about 90 minutes east of Dallas.

On Lake Fork, DeFoe targeted spawning bass with soft-plastic worms and swimbaits rigged on super-sharp and strong VMC hooks. “Those two set-ups are what I scored every bass on for these last three days … sight-fishing primarily,” he said Tuesday evening after completing the Knockout Round and qualifying for the championship Round. “Also [I was] catching some along the way that I couldn’t actually see, just throwing at stumps and fishing around some of that grass.”

In the first day of competition, every scorable bass DeFoe caught came on a long, pink finesse worm wacky-rigged on a No. 1 VMC Weedless Neko Hook. “The set-up to fish this thing on was really, really key,” he said. “I never lost anything on this deal. It’s a really, really high-percentage deal.”

A VMC Weedless Neko Hook is shielded by a durable 50-pound-test fluorocarbon weed guard, a feature that enables anglers to fish with confidence in the most challenging of settings without getting hung up. “I caught some really good fish [on it] that were back in gator grass,” DeFoe said. 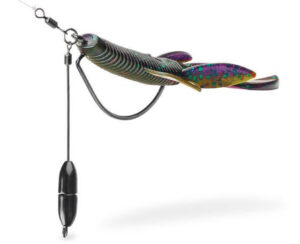 In the Knockout Round, DeFoe found success targeting spawning beds with a 4-inch, boot-tail swimbait presented on a VMC Tokyo Rig. “That deal really, really works well on the bed on a lot of those fish,” he said. “The Tokyo Rig has become one of the most versatile ways to fish with a soft plastic – from punching, flipping and pitching to dragging baits deep and shallow, but I’d be lying if I said it wasn’t equally effective on bedding fish!”

Imagine a drop-shot rig on steroids – with a big hook and indestructible metal leader. That’s a Tokyo Rig. It comprises a Heavy Duty hook, barrel-swivel, welded O-Ring, and a 2 ½-inch rigid-wire dropper arm to which you can attach a weight or two of your choice. The Tokyo Rig’s key design innovations are the freedom of movement the lure has, it’s unparalleled and also how it positions the weight below the bait and away from the impact zone. This helps ensure nothing gets between a bass and the hook during the hookset.