Texas angler Brent Taylor has been charged with fraud in a fishing tournament and possession of marijuana (less than two ounces) after the Texas Parks and Wildlife Department discovered he was allegedly cheating in local kayak bass fishing tournaments. This particular incident occurred on Decker Lake.

Because kayaks do not have livewells, these tournaments are typically won by an angler amassing a greater total catch length than other participants. When an angler catches a bass, he or she takes a photo of the bass on an approved bump board and sends it to tournament officials. This process allows the bass to be released immediately after recording the length.

TPWD claims that Brent Taylor used the cut tail of a bass and placed it further back on his actual catch, covering the cut with his hand, making the bass appear longer than it actually was.

A cut tail was discovered in the man’s kayak 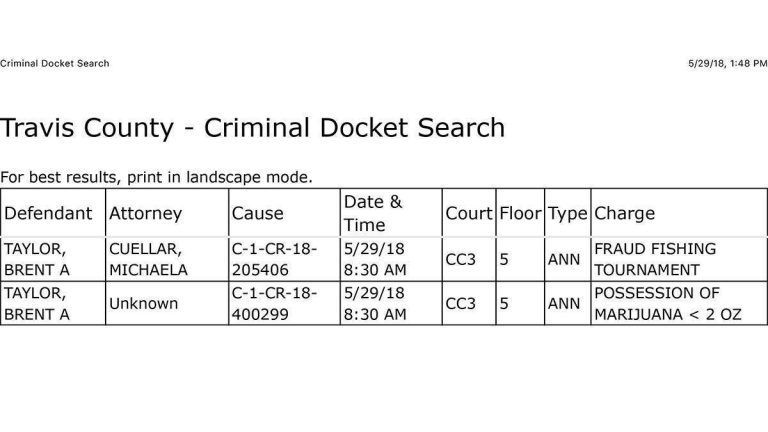 Game wardens discovered a cut tail in Taylor’s kayak. He initially claimed he found the tail in nearby reeds and collected it to take back to the shore. According to the TPWD, the man later admitted to using the tail to place over other fish to gain a competitive advantage on multiple occassions.

Below is their full statement:

“Game wardens investigating possible bass fishing tournament fraud in Travis and Bastrop counties discovered a unique sleight of hand while checking the potential violator after he had submitted questionable photos to a tournament on Decker Lake. The catch and release kayak fishing event used photos taken by contestants out on the water of their catches placed on a measuring board, with the angler having the most inches of bass in the aggregate declared the winner. Upon inspection of the violators [sic] vessel, a cut tail of a bass was found in the paddle well of the kayak. The violator initially stated he found the cut tail in the reeds and was taking it to shore to turn it in. Later the violator confirmed to have used the tail to place over another bass, using his hand to cover the questionable area, to make the fish look longer on multiple occasions. The violator was arrested for fraud in a fishing tournament. The charges are pending.”

This alleged fraud took place in an April 14, 2018 tournament. When we reached out to TPWD at the time, they were unable to release information because it was a pending investigation. Taylor’s first court appearance was scheduled for Tuesday, May 29 and the results of the hearing are unknown at this time. We will update this story with additional information as it is made known.

For more stories on kayak tournament cheating, click the links below: