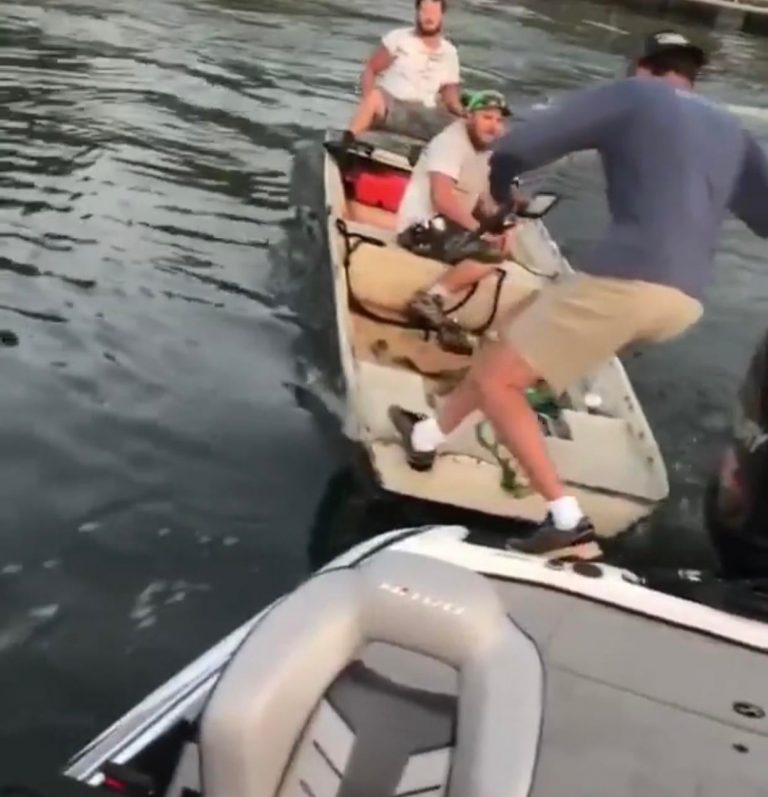 EDITOR’S NOTE: Warning foul language in the video. Sources confirmed the men were contractors working on the roof of the marina when the altercation happened.

[UPDATE: Aug 29, 2019 8:17 AM CST] This is one of the craziest confrontations we’ve seen involving anglers and two men in a jon boat trying to force the bass fishermen out of a marina with their boat. It was originally alleged in the original post that these men might be workers at the marina but the marina owner confirmed on Thursday that they are not employees. They were contractors working on a roof in the marina. Jacob Russell, who filmed the video and whose boat was being damaged, said the men were working on the roof of the marina and started throwing nails and cursing at the anglers demanding they leave. He has additional videos that corroborated the story.

We first saw the video on professional angler Zack Birge’s instagram account. Jacob Russell and Jacob McClendon were fishing on Ft. Cobb Lake in Oklahoma near a marina when they were rammed multiple times, pushed into a nearby dock and harassed and threatened by two angry, irrational men in an aluminum boat. Russell’s boat sustained damage in the altercation. The two men were interviewed by Caddo County Sheriff’s Office deputy after the incident, the police were shown the video but no arrests were made at the time. Oklahoma Department of Fish and Wildlife was also called but also did not take any action. Finally the Oklahoma Highway Patrol Lakes Division was called and has an investigation pending.

We spoke with Jacob Russell following the incident. And he shared the following account of what happened on his IG account:

“Here’s what led up to everything. Me and Jacob went to fish the marina at the lake. And a guy told us to fish on the other side of the marina because they had been seeing fish. Right after that a man on the roof says that there is no fishing within 150 feet of the marina. I politely told him that we are allowed to fish as long as we don’t touch his docks. He started calling us ignorant and was getting mad so we told him we would go farther away because there was a sign that said no fishing within 150 feet. But that was one sign and we were further than 150 feet from the sign. So we went 4 slips down and away from them.”

“About 2 minutes later, a guy comes and starts throwing the screws that they were using to hang the sheet metal with. He left when he was out of screws and we figured he was done. Around 1 minute later, he comes back with the Jon boat and you saw what happens there [on video]. He rams us into the dock breaking the trolling motor, the outboard fiberglass, and cracking the hull of the boat, and breaking a rod tip. We left and called the police and filed a report. Currently waiting for the investigators to figure everything out.

“Big shout out to Zack Birge for getting this story out there. Helped a lot in learning about the guys involved. Oklahoma highway patrol is doing their best to make it right. Thank God no one was seriously hurt, and it’s just a boat that can be repaired.
Hopefully this clears up all the comments asking about what lead to all of this.

“I pray justice will be served. And people realize you can’t treat fisherman this way. Thanks to everyone for all the support.”

We looked up the Wildlife code for Oklahoma to see if there was sportsman harassment laws on the books.

C. Any person convicted of violating this section shall be liable to the person to whom they interfered with for all costs and damages resulting therefrom. If said person holds an Oklahoma hunting, fishing or trapping license at the time of conviction, such license shall be revoked.