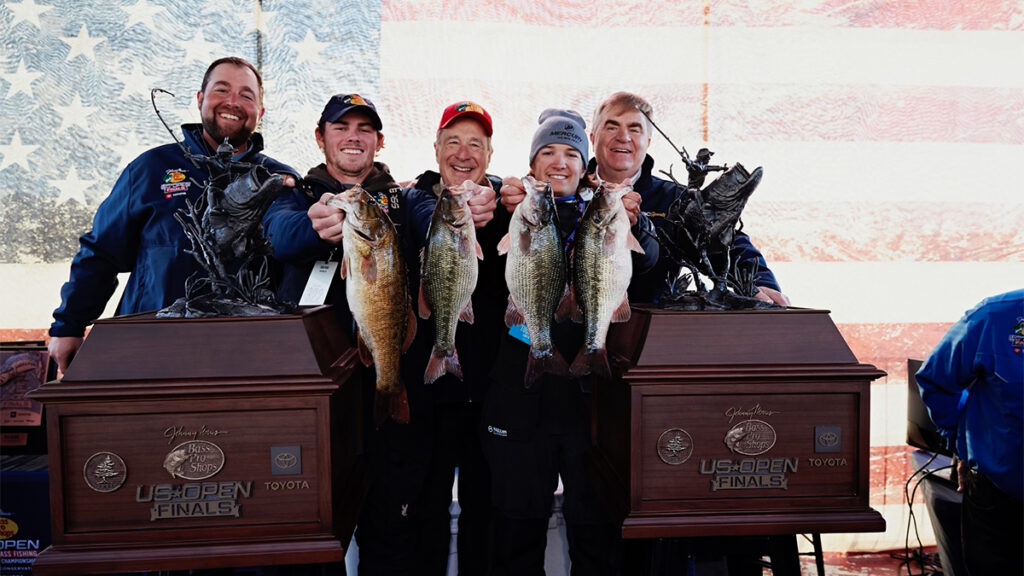 Logan and Tucker bested a field of 350 teams that qualified for the three-day National Championship, hauling in five fish for a Sunday-best 16.41 pounds, setting off a wild celebration while confetti rained down at Long Creek Marina at Big Cedar Lodge – America’s Premier Wilderness Resort. In addition to the life-changing $1 million, both Logan and Tucker were awarded an all-new 2022 Toyota Tundra and a Toyota Extra Care Platinum Vehicle Services Agreement to go with it, and a 21-foot bass boat.

“We are excited to make some dreams come true!” Johnny Morris said. “The competition on Table Rock Lake this weekend was tremendous. Congratulations to our winners and every angler who fished this tournament. Their enthusiasm and love of fishing, nature and conservation has been a driving force in our company’s 50-year history.

“We’re incredibly grateful for these anglers, our Kids Fishin’ Contest winners and the winners of our Missouri Veterans Fishin’ Contest, presented in partnership with the Missouri Division of Tourism,” Morris continued. “Throughout this grand tournament, we tried our best to honor the sport of fishing throughout the country. We are incredibly grateful for everyone involved in making this tournament a success especially our presenting sponsors and partners in conservation at Toyota.”

“We’re speechless. To win a tournament of this caliber is amazing,” Tucker Smith said after an emotional celebration. “We’d like to thank Johnny Morris, Bass Pro Shops, Toyota and everyone that helped organize this great tournament. After the first two days of the competition, we didn’t think we’d be the last team standing – it’s incredible.”

“Tucker and I think alike when it comes to catching fish and have good chemistry as teammates,” said Logan Parks. “Throughout the day, we tried not to think about the grand prize. Instead, we focused on being out on the water and having fun. Everything just seemed to work out. Thank you, Johnny Morris and Bass Pro Shops.”

“We’re honored to have been part of such an extraordinary event with our friend Johnny Morris and everyone at Bass Pro Shops,” said Bob Carter, executive vice president, Sales, Toyota Motor North America. “Keeping conservation at the forefront, we were excited to see the enthusiasm for this first-ever amateur angler tournament. From all of us at Toyota and Toyota Financial Services, congratulations to Logan and Tucker. We can’t wait to see where your all-new Tundra takes you!” 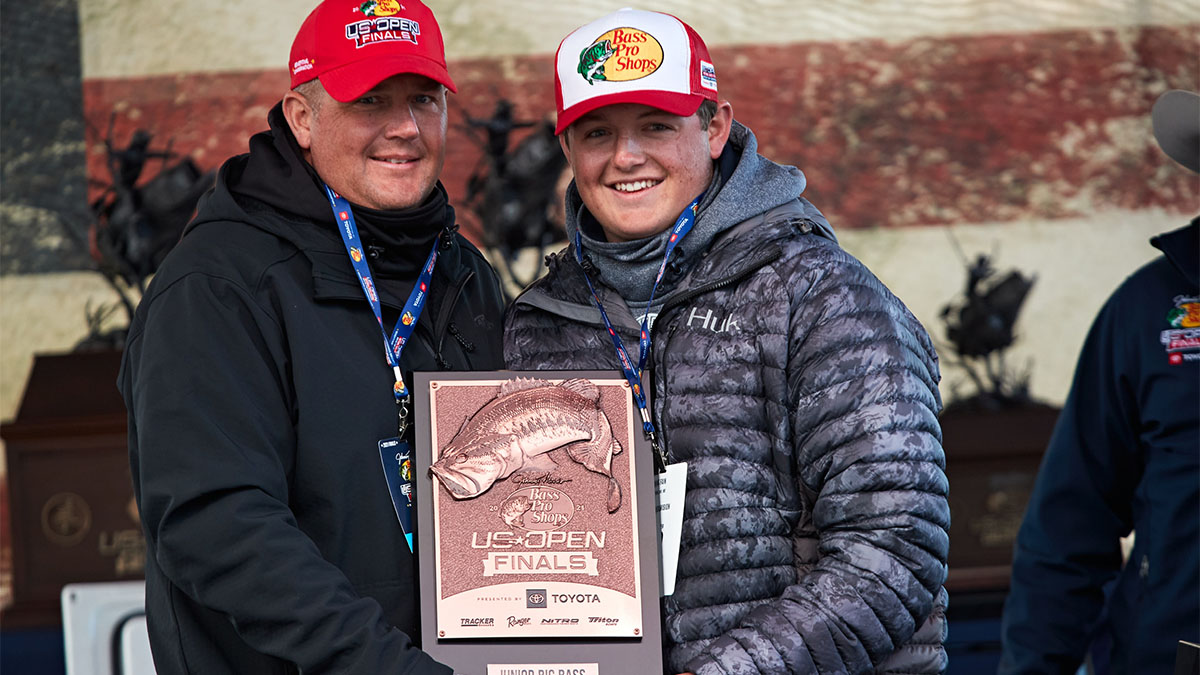 The Grandest Fishing Tournament in History

The championship weekend was brought about by the vision of noted conservationist and Bass Pro Shops founder Johnny Morris and his son, John Paul. The first-of-its-kind “ultimate owner’s appreciation event,” hosted owners of Tracker, Ranger, Nitro, Triton, Sun Tracker, Tahoe and MAKO brand boats, at Big Cedar Lodge – America’s Premier Wilderness Resort – on fabled Table Rock Lake. The grandest tournament in the history of fishing ushers in a new era to the sport.

Open exclusively to two-person amateur teams from across the U.S. (and beyond), all entry fees from each of the eight qualifying events and the final were donated to conservation.

The 350-team field that fished the U.S. Open Finals was composed of the top 40 finishers at each of the eight Regional Qualifying Events held nationwide throughout 2021. The field was rounded out with competitors from around the world nominated by independent White River Marine Group dealers representing Europe and Africa. Fishing teams represented 34 states as well as Japan, South Africa, Romania, Spain, and Germany.

Participation in the US Open was available only to amateur anglers. The grand prize, however, was larger than anything ever available to professionals. Competitors included teams of experienced weekend tournament anglers, fathers and sons, veterans, parents, brothers, grandparents, youngsters and more.

Televised on NBC – and drawing what is believed to be the largest audience in the history of fishing – the event showcased fishing’s unique ability to connect families while raising the profile of conservation and the importance of supporting America’s veterans.

The epic three-day championships included appearances and a performance by country music super star Chris Janson. Janson also highlighted a significant donation to Folds of Honor, an organization that provides scholarships to the families of fallen and disabled U.S. veterans. The tournament also produced a significant investment in the conservation of America’s lakes and rivers. The final round of the event will be featured during an upcoming special airing on NBC on December 5, 2021 at 4 pm CT. 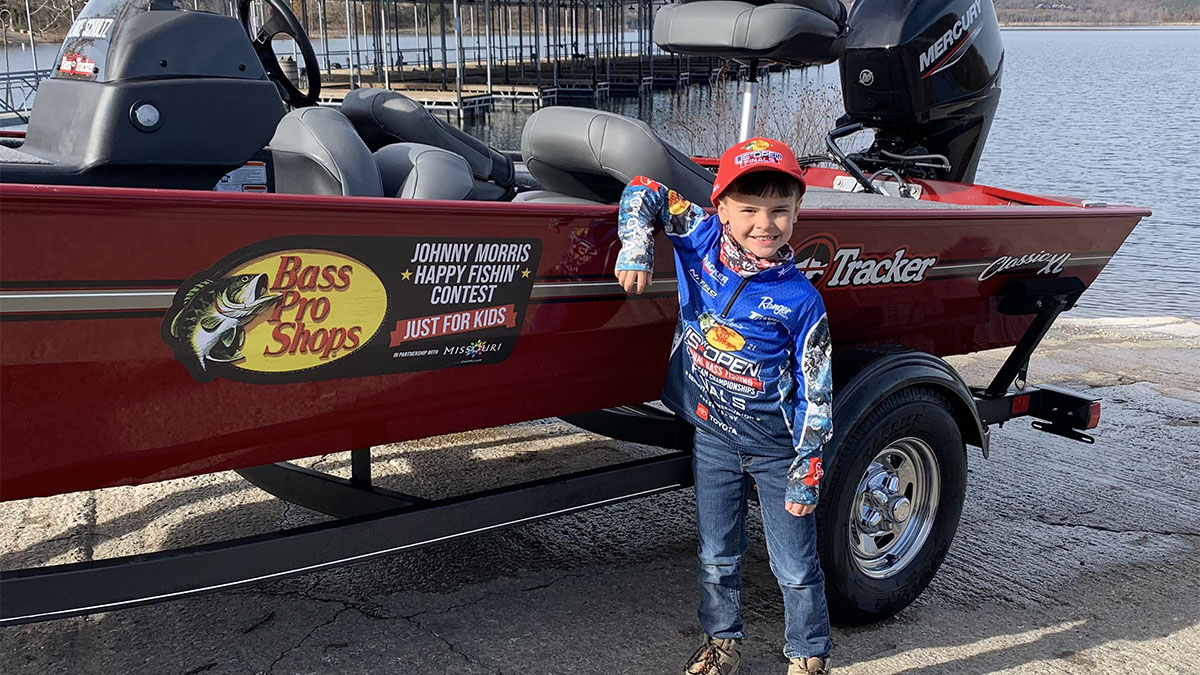 Nothing beats the smile on a kid’s face when they catch a fish! That was the inspiration behind the Johnny Morris Happy Fishin’ Contest, where anglers 17 and under submitted videos showcasing their love of fishing in the quest to win a new boat.

The nationwide contest was presented in partnership with the Missouri Division of Tourism. The response was incredible, with young anglers from 48 states submitting videos. Thirteen young anglers were awarded the prize package of a lifetime, including:

On Day 3 of the US Open, the 13 award-winning youngsters took to the waters of Table Rock in their brand-new Bass Tracker Classic XLs for a kids-only fishing competition. When it was all said and done, 12-year-old Ke’Mari Cooper from Quincy, Fla., caught a contest-best 3.06-pound bass, winning $5,000 per pound to take home a $15,331 check. 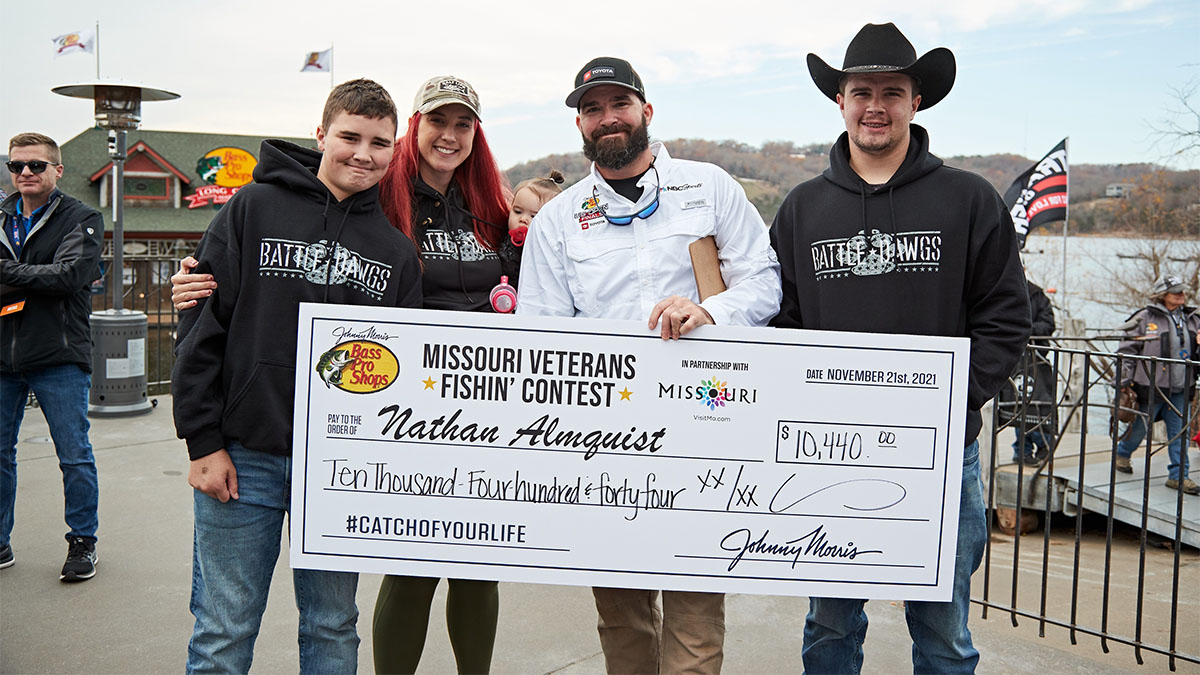 In every endeavor, Bass Pro Shops works to honor our America’s veterans and active-duty military. Johnny Morris announced the Missouri Veterans Fishin’ Contest in October to not only salute veterans for their service, but to encourage military families to spend time together outdoors.

Through the contest, veterans from Johnny’s home state of Missouri created videos that demonstrated their passion for fishing. Two outstanding veterans were awarded a brand-new Bass Tracker Classic XL on Friday, Nov. 19, in a special ceremony at Long Creek Marina.

Presented in partnership with the Missouri Division of Tourism, the Missouri Veterans Fishin’ Contest showcased the natural beauty of the state while honoring the service of the bravest of its residents.

Anglers, Bass Pro Shops and Toyota to Help Raise More than $1.58 Million for Conservation and the Future of Fishing

Entry fees from the US Open events were matched by Bass Pro Shops and Toyota, longstanding partners in conservation, to fund a $1.58 million donation to the National Fish Habitat Partnership. This commitment demonstrates the collaborative dedication of all involved in the tournament to conservation and the protection of North America’s natural resources.

The National Fish Habitat Partnership is currently the most comprehensive freshwater conservation program in the United States. Co-initiated by Johnny Morris and the U.S. Army Corps of Engineers in 2007, the partnership has supported over 1,000 projects in all 50 states, restoring tens-of-thousands of acres of habitat, including freshwater reservoirs and over 2,000 miles of rivers.

The National Fish Habitat Partnership was launched with a pilot project on Table Rock Lake in 2007. Working together with the Missouri Department of Conservation and the Arkansas Game and Fish Commission, Bass Pro Shops and the Corps of Engineers deployed more than 2,100 mega structures using specialty-built habitat barges made by Tracker Boats. The pilot project not only established a national reservoir habitat model, but has made Table Rock Lake one of America’s preeminent bass fisheries.

In keeping with a longstanding commitment to conservation, Johnny Morris and Bass Pro Shops partnered with the Missouri Department of Conservation to ensure all fish were released responsibly following a fish-friendly weigh-in.

It was, in fact, while fishing the 1970 All-American Bass Tournament on Table Rock Lake that Morris was inspired with the idea that would become Bass Pro Shops. The U.S. Open not only kicks off the celebration of Bass Pro Shops’ 50th anniversary, but brought the company full circle—to the place where it was born, on Table Rock Lake in the beautiful Ozarks of Missouri.

“Fishing in the first national BASS tournament on Table Rock Lake many years ago rewarded me with friends for life and served as my inspiration to start Bass Pro Shops. Fishing on the BASS Tournament Circuit also helped us stay informed on the latest emerging trends in fishing, which enabled us to stay closely connected to our customers. Without our loyal customers and industry-leading independent boat dealers, we simply wouldn’t be here today. This tournament is our way of saluting and rewarding our customers with the chance to land the catch of a lifetime. It was exciting and thrilling to celebrate 50 years of heritage, advance important conservation initiatives, and have some big fun with people who love fishing as much as we do,” Johnny Morris said.

Morris underscored, “We are also very grateful to our network of independent boat dealers. Their passion and support for helping get so many anglers and families out on the water makes fishing dreams possible.”